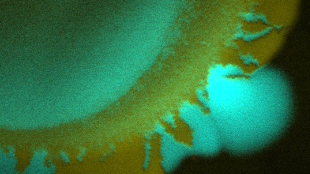 Macrocolony of two E. coli strains that either produce or scavange AI-2OZ OZKAYA, INSTITUTO GULBENKIAN DE CIENCIAA bacterial signaling molecule can alter the composition of the gut microbiome in mice, according to the results of a study published today (March 19) in Cell Reports. Researchers from the Instituto Gulbenkian de Ciencia (IGC) in Oeiras, Portugal, have shown that boosting the levels of a quorum-sensing molecule in the intestines of mice treated with a gut microbe-depleting antibiotic results in the repopulation of beneficial bacterial species.

This quorum-sensing molecule, made and sensed by some microbes, is used by individual bacterium to sense the presence of other bacteria in their environment. The IGC team’s results point to a potential way to manipulate this molecule, called pan-species autoinducer-2 (AI-2), to promote healthy gut microbiota following diet- and disease-related perturbations.

“While the vast majority of studies on the microbiome identify different bacteria...

“It’s a proof of principle that we can increase the fitness of specific microbial groups in the gut,” said Marvin Whiteley, a microbiologist at the University of Texas at Austin.

Bacteria secrete fluctuating levels of quorum-sensing compounds depending, in part, on the number of bacterial cells present in a given environment. This helps the microbes communicate and influence one another’s behavior. IGC’s Jessica Thompson, Rita Oliveira, Karina Xavier, and their colleagues reasoned that commensal populations of bacterial species in the gut may communicate using AI-2, and that altering levels of AI-2 might influence the composition of species in the mammalian GI tract.

As expected, the researchers found that treating mice with the antibiotic streptomycin for 28 days resulted in a decrease in the amount of total gut bacteria, and a shift in the types of bacteria recovered from the animals’ feces. Using high-throughput sequencing on extracted DNA from fecal samples prior to antibiotic treatment, the two most represented bacterial phyla, Firmicutes and Bacteroidetes, made up 43 percent and 48 percent of the bacteria detected, respectively, with at least three other phyla present in lesser amounts. After antibiotics, the total bacterial diversity of the gut decreased, while the percentage of Bacteroidetes increased and Firmicutes decreased.

After establishing how streptomycin alters the gut microbiota in mice, the researchers fed a different set of mice E. coli that were genetically modified to either internalize—and therefore, deplete—environmental AI-2 or produce high amounts of extracellular AI-2, beginning on day two of streptomycin treatment. (Streptomycin treatment increases the growth of E. coli in the gut.) As a result, mice that had high levels of AI-2 in their guts contained less Bacteroidetes than animals with less AI-2 in their guts by the 28th day of treatment. Despite antibiotic treatment, Firmicutes species expanded in the mice with higher AI-2 levels.

The observed responses of these phyla to AI-2 could have to do with the level of expression of this chemical signal by these different species, the researchers noted: only 17 percent of Bacteroidetes are predicted to synthesize a version of AI-2 compared to 83 percent of Firmicutes species. The presence of AI-2 appeared to favor the growth of Firmicutes species known to contribute to the health of the mammalian gut.

“The exciting potential here is to change the ratios of gut bacterial populations,” said Eric Pamer, an immunologist and infectious disease specialist at the Memorial Sloan Kettering Cancer Center in New York City. “It would be intriguing to see to what extent quorum sensing can impact an intact microbiome, without the presence of antibiotics.”

Xavier and her colleagues are working on just that: feeding mice a prodrug containing AI-2 that is released only in the gut. “Now that we know increasing AI-2 has positive effect, it makes sense to try to add it directly,” said Xavier.

“We are in a time when we don’t really know all of the associations between the gut microbiome and human health,” said Pamer. But the importance of diversity within the gut microbiome is becoming clear. “There is also a lot of the chemical lexicon of bacteria still to be discovered and evidence of other molecules that have not yet been identified,” said Xavier.