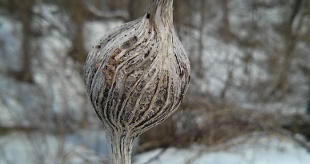 During the North American winter, when most animals try to escape the cold, the Goldenrod gall fly (Eurosta solidaginis) stays put and freezes nearly solid. But pockets of liquid life remain within the fly, allowing the insect to resume its activities come spring. According to a study published today (April 30) in The Journal of Experimental Biology, E. solidaginis possesses a secret antifreeze weapon—a rare lipid.

Until now, only one type of lipid was thought to have antifreeze properties, according to study coauthor Brent Sinclair from the Western University in Ontario: “antifreeze glycolipids, [which were] discovered a few years ago by Jack Duman and colleagues at University of Notre Dame.”

The parasitic fly preys on a specific plant host—the Canada goldenrod, Solidago canadensis, a relative of the sunflower. Adult gall flies mate and lay eggs at the tips...

Overwintering larvae store carbohydrates and lipids in special fat body cells, which survive intracellular freezing. This first amazed the late Reginald Salt at the Canadian Agricultural Research Station at Alberta in 1959, while he was studying E. solidaginis in the field—he observed clear lipid droplets inside the larval insects’ frozen fat body cells.

Eager to determine the contents of these droplets, Western’s Katie Marshall and her colleagues collected galls from goldenrod plants from fields in nearby London, Ontario, during the 2011-12 winter. The researchers ground up insects, dissolved them in organic solvents, and separated the lipids according to molecular weight using thin layer chromatography/flame ionization detection.

Most animals store fats as long-chain triacylglycerols (lcTAGs), lipids made of three fatty acid chains bound together by glycerol. But in the gall fly larvae collected before winter, the researchers found that common lcTAGs made up hardly a quarter of the lipids. Nearly 46 percent were rare lipids—acetylated triacylglycerols (acTAGs), which are triglycerides with an acetyl group attached to one of the fatty-acid chains. The acetyl group in acTAGs changes the way the molecules interact with water—they don’t repel it as much as lcTAGs do, allowing the lipids to interact with other cellular components. And acTAGs lower the cell’s overall freezing temperature.

Marshall and her colleagues were the first to report finding an animal with a lipid pool dominated by acTAGs.

“We have two hypotheses at the moment about how acTAGs prevent tissue damage: the acetyl group might help the molecule to function like an antifreeze, or it may just be that acTAGs remain liquid enough to reduce the mechanical damage that happens during cytoplasmic freezing,” Marshall explained in an e-mail to The Scientist.

Because of low temperature-induced freezing stress, the gall fly starts producing acTAGs in early autumn, while the levels of lcTAG remain constant. During spring, the process reverses: in their analysis, the researchers for that the amount of lcTAG increased while the amount of acTAG decreased, both by the same relative amounts. This caused the team to speculate that the fly was converting lcTAGs into acTAGs during winter and then back to lcTAGs in spring.

“Modification of lcTAGs to produce acTAGs with their unique stereochemistry would be quite complicated based on what we know about TAG synthesis,” said biochemist Timothy Durrett from Kansas State University, who studies acTAGs in plants but was not involved in the study. “If the authors’ claim about the method of acTAG synthesis in the gall fly is correct, it will be extremely interesting to isolate the enzymes involved in that process.”

John Ohlrogge, a plant biologist at  Michigan State University, was more cautious about the authors’ interpretations. “I feel the evidence that the insects produce acTAG is a very important observation,” he wrote in an e-mail. “But there is no direct evidence to support the freezing hypothesis, or the biosynthesis from lcTAG.”

Nevertheless, the researchers maintained that their study serves to enhance researchers’ understanding of lipids for cryopreservation. “We speculate that the unique conditions of Eurosta fat body cells—lots of lipid, intracellular freezing—may have made acTAGS selectively advantageous,” said Sinclair. “Possibly, this is the only species to have evolved this molecule for this purpose.”

“If we could find a biological way to make lcTAGs into acTAGs, like fermentation, it would make it relatively easy to make acTAGs which stay liquid in the cold,” he added. “This will make them more useful as biofuels in cold places.”

Correction (May 2): This article has been corrected to reflect that the Gall fly can survive at temperatures as low as -80°C. A previous version stated the temperature at which it is cryopreserved: -9°C. The Scientist regrets the error.

Editor’s note (May 2): We’ve updated the story with an image supplied by the study’s authors.