A father's diet can directly affect his daughter's health, according to a study in rats published today (October 20) in Nature.

For the first time, researchers have demonstrated a purported epigenetic link between a father's high-fat diet and an increased risk of disease in his offspring -- in this case, diabetes. Numerous papers have shown that aspects of a mother's health, including her weight, can have a significant impact on her offspring, but few have shown the same effect on the paternal side.

"It really does bring the father into play," said Michael Skinner, a researcher at the Center for Reproductive Biology at Washington State University, who was not involved in the study.

"This outcome suggests that our predisposition toward disease can be affected by what our parents or grandparents consumed during key points in their development," Tracy Bale of the University of Pennsylvania said...

Margaret Morris, a researcher at the University of New South Wales in Sydney, Australia, and senior author on the paper, decided to test the idea after wondering about the male rats in some of her obesity studies. "I could see their prostates getting bigger and I thought, 'Boy, what's this doing to their reproductive function?'" said Morris. Together with Sheau-Fang Ng, a pediatric endocrinologist in the lab intrigued by obese families she regularly witnessed in the clinic, Morris set out to see if there was some non-genetic transmission of traits from an obese father to his offspring.

Male rats were started on a high-fat diet -- 40 percent more calories than control rats -- prior to puberty at 4 weeks old and kept on the diet for 12 weeks. The rats became obese and began developing diabetes, including glucose intolerance and high resting levels of insulin. After the rats were mated, the researchers analyzed the offspring, gestated in normal females. Early evidence suggested female offspring are more susceptible to paternal effects, so the team focused on female pups. By 6 weeks old, the young female rats were glucose intolerant. By 12 weeks of age, they had impaired insulin secretion. When the rats were dissected at 12-14 weeks, they had a noticeable decrease in islet mass, or insulin-secreting cells in the pancreas, relative to control offspring.

Additional research showed that the paternal high-fat diet actually altered gene expression in female offspring, changing expression patterns for 642 pancreatic islet genes and numerous others involved in signaling and apoptosis pathways. "That might be relevant to why we have a loss of islets" in female pups, Morris told The Scientist.

Presumably, the effects of a high-fat diet -- most likely epigenetic changes such as DNA methylation or histone modification, Morris believes -- were passed from father to daughter through the father's sperm. "We really have to look at the sperm here. The sperm is the elephant in the room," said Morris. Germ line cells are just as susceptible to environmental factors as other cells in the body, and if they undergo changes, "it can have dramatic effects, not only for the immediate offspring, but also subsequent progeny," said Skinner, author of an accompanying News & Views article in this week's Nature.

Future studies still need to test whether the father's diet can affect future generations and if the same holds true in human populations, said Morris. "We have to be a little bit cautious, because clearly it is a rat study," she added, "but this paper does tell us something about the sorts of consequences we might be facing if the obesity epidemic continues." 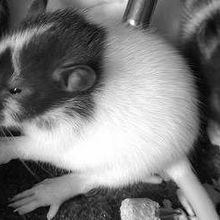