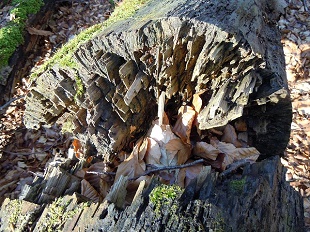 PIXABAY, VIELEINERHUELLEFungi that digest wood are typically categorized as white rots, which degrade both lignin and cellulose, or brown rots, which only have enzymes that act on cellulose. But two newly sequenced species are capable of digesting lignin, even though they lack the enzymes typically found in white rots, according to a study published this week (June 23) in PNAS.

The species, Botryobasidium botryosum and Jaapia argillacea, appeared to be white-rot fungi based on the microscopic patterns they created in decomposing wood. “But at the molecular level, we found that the key enzymes considered markers of white-rot fungi were missing,” said Igor Grigoriev of the US Department of Energy (DOE) Joint Genome Institute (JGI) in Walnut Creek, California, who led the work.

The results suggest “a continuum rather than a dichotomy between the white-rot and brown-rot modes of wood decay,” and highlight the need for a more...

“There was a lot of suspicion within the scientific community that the decay mechanisms wouldn’t be as straightforward as they’re currently classified, but the data wasn’t quite there,” said fungal biologist Dan Eastwood of Swansea University in Wales, who was not involved with the work. “This study brings more genomes to the point where we are plugging important gaps to say it’s more complicated than [just two kinds of rot].”

Eastwood likened the structure of wood to that of reinforced concrete, where lignin forms the concrete, and cellulose the iron rods that run through and support the structure. Brown-rot fungi digest only the cellulose, leaving behind a dark-colored, brittle mass of lignin. White-rot fungi often digest lignin first, leaving behind long strands of cellulose in a fibrous mass. The two kinds of decay create different porous structures in wood.

For the present study, Grigoriev and his colleagues compared the genomes of 33 basidiomycetes, a group which encompasses most wood-decaying species, including four newly-sequenced species. A phylogenetic analysis of the plant-biomass-decomposing enzymes used by these organisms showed that two of the new species were closely related to a model white-rot fungus, Phanerochaete chrysosporium, and could decompose crystalline cellulose even though they lacked the lignin peroxidases typically used by white rots.

The microscopic structures created by the two rots are “a result of these processes,” Grigoriev explained. “The lignin peroxidases were the key distinction,” he said. “Now we see the different phenotypes even with the lack of these enzymes.”

The work “lays a lot of significance only to two exceptional fungi, so I would not totally abandon the dichotomic separation of wood rotting fungi,” said microbiologist Annele Hatakka, a professor at the University of Helsinki, Finland, who was not involved in the study.

Hattaka agreed that the term “white rot” should be used only to describe fungi that degrade all the components of wood—lignin, cellulose, hemicellulose, and other polymers. But she highlighted a need for more genome data on common white rots. “We have too few genomes of the most typical white-rot fungi,” she wrote in an e-mail. “More than 90 [percent] of wood-decaying fungi are traditional white rots. We should have many more common white-rot fungal genomes, for example to see the significance of laccase, which was once considered the most typical characteristic of white-rot fungi.”

The wood-decay mechanisms used by these new species also reveal their evolutionary history. In a 2012 Science paper, the researchers showed that a white-rot species was likely the common ancestor of both rots; brown rot fungi then branched out from this ancestor on several separate occasions, the authors proposed.

“The evolution that allowed an organism to break down wood for the first time, only occurred once, as far as we know,” said Eastwood. “Very few things can break down wood.”

Understanding the enzymatic and non-enzymatic mechanisms that these fungi use to decompose lignin could inform biofuel industries, according to Grigoriev. Manufacturing ethanol from cellulose frequently requires lignocellulose digestion, a step that remains a major challenge. Bio-refineries to convert lignocellulose to fuels were not commercially viable as of a 2011 report from the National Academies of Sciences.

“As we move towards a bio-based economy, it is important to understand biological processes that convert plant biomass into biofuels,” said Grigoriev. “We’re trying to use genomics to learn to build the machinery for a bio-based economy.”