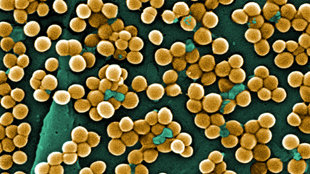 The findings suggest that the molecule—known as HAMLET (human alpha-lactalbumin made lethal to tumor cells)—could be useful as an antimicrobial adjuvant to boost otherwise ineffective antibiotics against MRSA and other “superbugs” that can cause lethal infectious outbreaks in hospitals.

HAMLET is one of the first antimicrobial adjuvant therapies to show efficacy in vivo, said Anders Hakansson, a microbiologist at the University of Buffalo and lead author of the study. “This molecule can help sensitize [resistant] bacteria to antibiotics we already have,” said Hakansson, “so we can again start using the treatment arsenal that was once available but that has...

Additionally, if the compound does indeed prove effective in humans, HAMLET could be used to lower the doses of antibiotics needed to fight ordinary bacteria, which could slow the build up of resistance, he said.

But Karen Bush of Indiana University in Bloomington, who was not involved in the study, warned that “there are some problems with making this a viable therapeutic option. The main concern is that they are going to have to use high concentrations of HAMLET in order to affect all the MRSA strains out there,” which may not be cost effective and could bring problems with solubility and, potentially, toxicity.

But such problems may be avoided if HAMLET is used as a topical treatment for wound infections, she said. “I think this could be used topically, in treating wound infections, something where you spread it on the skin or on a dressing. Something like that could be effective.”

Hakansson began working with HAMLET—a lab-made combination of alpha-lactalbumin and one of two lipids, all of which are found in human breast milk—as a graduate student in Sweden. In 1995, he demonstrated that the protein complex killed tumor cells, and later showed that it does so by infiltrating the tumor cell’s mitochondria, depolarizing the inner membrane and inducing cell death.

In 2011, Hakansson’s group showed that HAMLET could also kill Streptococcus pneumoniae via a similar mechanism—a sodium-dependent influx of calcium ions that led to membrane depolarization. And last year they demonstrated that even at non-lethal concentrations, HAMLET sensitized the same bacterial pathogen to antibiotics.

To see if HAMLET would have the same potentiating effect on S. aureus, in which it did induce calcium influx but not apoptosis, Hakansson and his University of Buffalo colleagues Laura Marks and Emily Clementi used in vitro assays to show that the presence of HAMLET could make MRSA sensitive to methicillin, and render other resistant strains sensitive to vancomycin, erythromycin, and gentamycin. With HAMLET, these antibiotics not only inhibited the growth of the bacteria, but also killed them. The molecule had the same affect on antibiotic activity against S. aureus biofilms.

The team then tested the HAMLET/antibiotic combination on MRSA in the nasal passage of living mice, and found that while methicillin alone failed to reduce colonization, the combination produced a significant decrease.

Hakansson said that by blocking the cell’s hydrogen ion pump, HAMLET dissipates the proton gradient across the membrane. “This means the cell has a harder time making energy, so the cell’s efflux pumps—the usual mechanism for expelling antibiotics—would not work as effectively,” he said.

Methicillin works on the outside of the cell, however, so it is not clear how its efficacy is improved by HAMLET. Hakansson speculated that changes to the ion concentrations across the membrane could result in structural alterations to the cell wall that allow methicillin to bind more effectively. “It appears there are some changes in the cell wall that make it an easier target,” he said.

Finally, the researchers demonstrated that HAMLET inhibits the evolution of methicillin resistance even as the bacteria are repeatedly exposed to increased concentrations of the antibiotic.

“They certainly show there is a slower development of resistance, but they’re still seeing resistance,” Bush noted. “There is no way you’re going to shut down resistance completely.”

Nevertheless, Hakansson has confidence in the approach, and has cofounded a company to test HAMLET on different bacteria and infection models. “I’m hoping this [work] will trigger more thought in this direction—rather than trying to find new antibiotics, looking at adjuvants would not be a bad idea.”

L. Marks et al., “Sensitization of Staphylococcus aureus to methicillin and other antibiotics in vitro and in vivo in the presence of HAMLET,” PLOS ONE, 8:e63158, 2013.