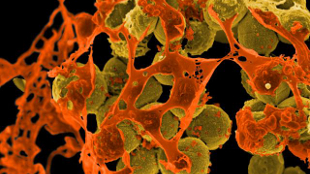 Scanning electron micrograph of methicillin-resistant Staphylococcus aureus (MRSA, brown) surrounded by cellular debrisNIAID/NIHWhen an infectious outbreak occurs, hospital investigators combine epidemiological data with bacterial typing to trace the source and path of the pathogen in the hopes of preventing further infections. Current methods are slow and offer limited resolution, meaning they can’t always differentiate between strains originating from the same bacterial clone. But by dramatically increasing the speed and accuracy of strain discrimination, a new generation of rapid, low-cost whole-genome sequencing (WGS) technologies promises to revolutionize outbreak surveillance and investigation.

With full genome sequences, researchers can spot the mutations that accumulate every time a bacterium divides down to the single nucleotide level. This allows them to track the evolution and movement of microbes with unprecedented precision, potentially leading to life-saving interventions and improved infection control strategies.

“I expect whole-genome sequencing will be transformative, in particular in outbreak investigations,...

Two studies from this year demonstrate the power of this approach. In 2011, the National Institutes of Health (NIH) Clinical Center in Bethesda, Maryland, experienced an outbreak of a highly resistant form of Klebsiella pneumoniae, which causes urinary, respiratory, and blood infections in people with weakened immune systems, and kills more than half of it infects. The doctors knew one patient was carrying the pathogen but she was carefully isolated, so they thought it had been contained. Then, 3 weeks after she was discharged, another patient was diagnosed and more cases followed. In total, 18 patients were infected and 6 died as a direct result.

The conventional method for bacterial typing is pulse-field gel electrophoresis, in which large DNA fragments are separated by an electric field to create genetic fingerprints for each bacterial sample. But the technique “was too coarse to tell us whether our first two cases were two separate introductions or [if] one was transmitted from the other,” said Tara Palmore, an infectious disease physician at the Clinical Center. Doctors and researchers were at a loss to explain the spread—and powerless to stop it.

Once the outbreak was under control, colleagues from the National Human Genome Center sequenced the genomes of the bacteria isolated from affected patients. Genetic similarities between samples revealed that all the strains had come from the first patient (patient 1), which had seemed unlikely from the epidemiological data—because there was no direct contact between that patient and those that were subsequently infected. They also found that patient 1 harbored three genetically distinct versions of Klebsiella, and that each had been transmitted on separate occasions to start three different lineages of infection.

Using an evolutionary tree to reconstruct the likely route, the researchers showed that “the dynamics of transmission were far more complex than we first realized,” said Palmore. “It was mostly being spread by asymptomatically colonized patients,” or “carriers.” For example, the bacteria first jumped from patient 1 to two patients that remained asymptomatic for some time—and it was those asymptomatic patients that passed the infection on to “patient 2,” the second patient to show signs of infection. Such a counterintuitive path could not have been predicted, and would not have been detected without genetic data.

Over in the United Kingdom, as a strain of methicillin-resistant Staphylococcus aureus (MRSA) spread through a neonatal unit at Rosie’s Hospital in Cambridge, infecting 12 infants over a 6-month period in 2011, researchers also turned to WGS for answers. A team at Cambridge University and the nearby Wellcome Trust Sanger Institute compared full-genome sequences of bacteria from infected infants, and revealed that all the strains were descended from a common source. Then, when another baby was infected 2 months after the previous case, sequencing showed it was part of the same outbreak. That led the team to screen all the staff, which identified one person who was carrying MRSA—and was likely involved spreading it to the babies.

“It’s impossible to prove that this epidemic was stopped by this intervention, but we believe it prevented further transmission,” said Julian Parkhill, a microbiologist at the Sanger Institute and co-author of the study. But either way, he added, it demonstrates the power of whole-genome sequencing for elucidating the movements of pathogens.

With the latest bench-top machines capable of sequencing a bacterial genome in just a few hours, outbreak analyses can now be performed in real time—with obvious benefits. “It will enable rapid identification of a [real] transmission, and save a lot of time and effort in not having to chase down spurious transmissions,” said Parkhill. And more efficient tracking of transmission allows for much more targeted and effective infection-control measures, Palmore added.

In addition, WGS will help to track antibiotic resistance mutations as they evolve. “It can be quicker than phenotypic testing, which requires growing the bacteria in the presence of a range of antibiotics,” said Holt. “With sequencing, we can quickly see which resistance mechanisms the bug has encoded in its DNA,” which can guide treatments.

Real-time sequencing of hospital pathogens is unlikely to become a routine practice quite yet, however, largely because the interpretation of genetic data requires a level of expertise that lies beyond most clinicians. To overcome that obstacle, the development of analysis tools that can provide clinically relevant information in a manner that infectious-disease physicians can understand is absolutely critical, said Parkhill. “The average clinician in a hospital is not going to be able to do this [analysis], so it has to be automated.” Parkhill’s group is working to develop such a system.

Meanwhile, the UK Health Protection Agency is already exploring whether it is cost-effective to use the approach to supplement existing methods in a select few English hospitals. Indeed, although only a handful of proof-of-principle case studies exist, it’s clear that WGS is going to have a big impact on infection control and public health in the future, said Derrick Crook, a microbiologist at the University of Oxford who worked on a pilot study for tracking MRSA and C. difficile in three UK hospitals. “We’re looking at this being used [in a clinical setting] over the next few years.”