A drawing based on one of Ramón y Cajal’s “selfies,” with his pyramidal neuron illustrations around him. According to Hunter, Ramón y Cajal obsessively took photos of himself throughout his life. DAWN HUNTER, WITH PERMISSIONIt was in the spring of 2015 when Dawn Hunter saw Santiago Ramón y Cajal’s century-old elaborate drawings of the nervous system in person for the first time, at the late scientist’s exhibit within the National Institutes of Health. She was instantly compelled to recreate his ornate illustrations herself.

“I just immediately started drawing [them] because they were so beautiful,” says Hunter, a visual art and design professor at the University of South Carolina. “His drawings in person were even more amazing than I thought they were going to be.”

Ramón y Cajal’s drawings first caught Hunter’s eye while doing research for a neuroanatomy textbook she was asked to illustrate in 2012. Ramón y... 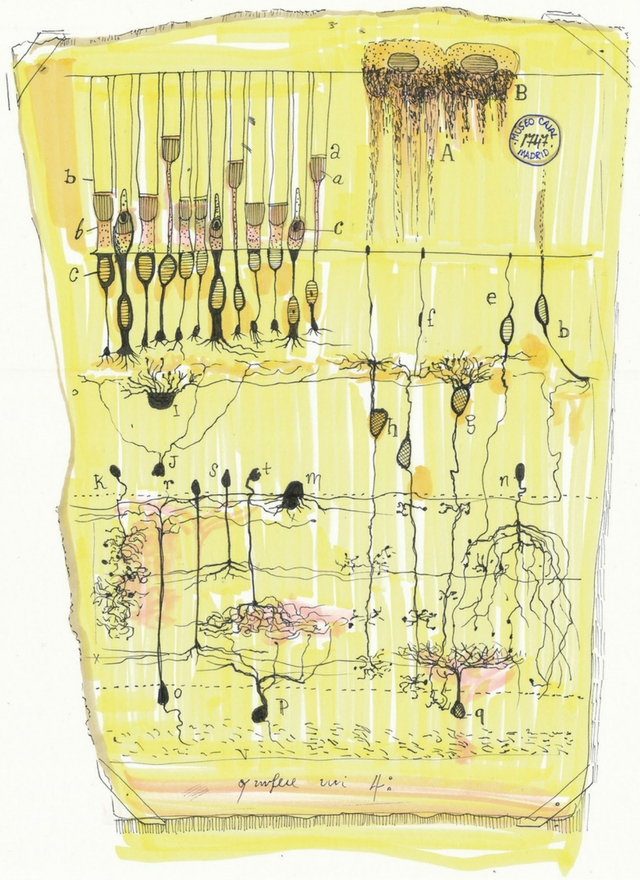 A recreation of Ramón y Cajal Cajal’s retina depiction. “His retina drawing is particularly interesting because he combines both of his main drawing techniques. . . . Part of the drawing is designed and drawn out preliminarily and part of it is drawn from observation,” says Hunter.DAWN HUNTER, WITH PERMISSIONWhile recreating his work, Hunter was able to shed unprecedented light on how he went about his craft. “Some neuroscientists erroneously think that he traced all of his drawings from a projection, which he did not,” she says. This involves expanding a magnified image of the specimen being viewed under the microscope onto the table using a drawing tube or camera lucida. While he did use this tool in certain instances, she says, he drew some of his drawings, like his famous pyramidal neurons, “through his observation with his eye,” a technique known as perceptual drawing.

“I was shocked and in awe by how [some of his drawings were] put together—with a continuous, refined, and accurate line for each unique form” that he drew while peering at his subjects through a microscope, Hunter wrote in an application for a Fulbright scholarship, which she was awarded this year. This deviates from the perceptual drawing process followed by most artists, she explains. Typically, the artist uses pencil and “articulates, erases, and re-articulates the observed,” she writes. Ramón y Cajal didn’t use pencil first, choosing to draw in ink right off the bat. “His approach to drawing revealed a personal intensity and absolute focus.”

But when he illustrated his own hypotheses on the function of more-complex neural circuits, Ramón y Cajal often combined approaches. He’d include tracings with a camera lucida as well as sketches from his direct observation, and would often use pencil to map out where he wanted to place things prior to using ink, Hunter explains.

Hunter’s immersion in Ramón y Cajal’s work will take her to the Cajal Institute in Madrid, Spain, for four months through the Fulbright España Senior Research Fellowship. Starting this September, she will pore over 2,000 of his drawings as well as photographs, sculptures, letters, a Nobel Prize, and a death mold—an actual mold of his face taken upon his death—in order to create original, biographical drawings and paintings of the famed neuroscientist. 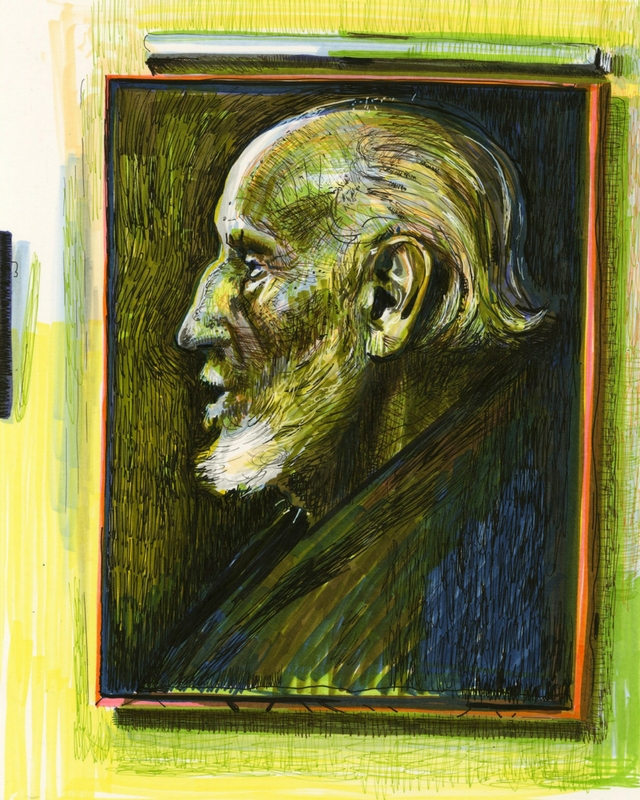 A drawing of Ramón y Cajal based on a black and white photograph taken by Jorge Zockoll displayed at the Cajal Institute’s entrance in Madrid DAWN HUNTER, WITH PERMISSION Prior to taking on the project, “I probably would have been intimidated if I understood the scope of his influence,” she says, or “[I] may have thought that it wasn’t my place.”

But rather than setting out to create an artistic biography of one of neuroscience’s greatest and best-known pioneers, she describes conceiving the project as “sort of an intuitive thing,” with her increasing interest gradually paving the way. “It just became this unraveling,” she recalls. As she dug in and peeled back the layers of Ramón y Cajal’s life—discovering his works of science fiction, his collection of photography, his storied and, at times, harsh childhood—she felt personally connected to late scientist. Like the freehand sketches of Ramón y Cajal’s neurons, Hunter’s project blossomed from an organic and gradual fascination, rather than a preconceived design.

A reinvention of young Ramón y Cajal’s drawings of a battle scene in his textbooks, with his later sketches of neurons superimposed throughout. “He was constantly drawing battles or re-creating fictional narratives that he read in his free time while in school, says Hunter, and “was constantly immersed in narrative and fantasy, which of course influenced his work and perception of neurons in his scientific lab.”