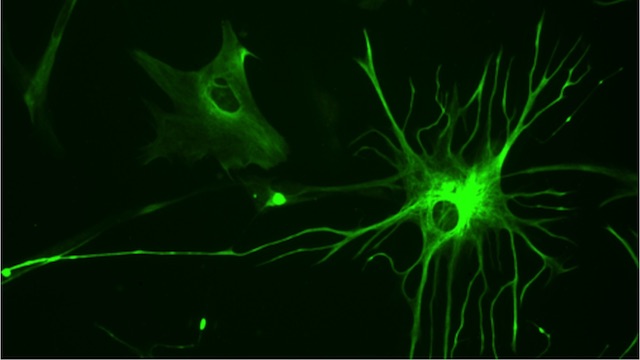 Parkinson’s, a neurodegenerative disease that primarily affects the motor system, is marked by a progressive loss of dopaminergic neurons in the brain. While current treatments are aimed at replenishing dopamine levels, none are able to restore the lost cells. Now, scientists have devised a way to reprogram glial cells into active dopamine neurons that can partially restore motor function in a mouse model of Parkinson’s. This proof-of-principle study could pave the way to a new treatment for the disease, researchers reported today (April 10) in Nature Biotechnology.

“In Parkinson’s disease, dopamine neurons die, but at the same time, because of inflammation . . . some glial cells become reactive and proliferate,” said coauthor Ernest Arenas, a molecular neurobiologist at the Karolinska Institute in Sweden. “So we thought that one interesting possibly for reprogramming could be to turn these [glial] cells . ....

The researchers were able to successfully transform up to 16 percent of human astrocytes into dopaminergic neurons that were capable of firing action potentials in vitro. “We were really amazed by the physiological properties of the cells,” Arenas told The Scientist. “The reprogrammed cells had fantastic electrophysiology that is difficult to get in stem cell–derived cells.”

When the team applied this protocol to a mouse model of Parkinson’s (in which dopaminergic neurons in the striatum are killed by a toxin), the rodents displayed improved motor behavior and gait control. “The major achievement of this study is that, for the very first time, they show a behavioral effect achieved by reprogrammed neurons,” Magdalena Götz, a neuroscientist at the Ludwig-Maximilians-University Munich in Germany who was not involved with this study, told The Scientist. While many groups have converted various glial cells into neurons both in vitro and in vivo, she added, none had reported a corresponding change in behavior, until now.

“Generating in vivo dopaminergic neurons is an excellent way to replace the current L-dopa approach [to treating Parkinson’s],” said Gong Chen, a life sciences professor at Pennsylvania State University who was not involved in the work. L-dopa, or Levodopa, is a dopamine precursor that is commonly prescribed to treat the symptoms of Parkinson’s disease. “By regenerating dopaminergic neurons locally, you can greatly reduce the desensitization of dopamine receptors all over the brain,” Chen added. However, he pointed out that the reprogramming efficiency in the current study was relatively low. In a recent study, Chen’s group was able to reprogram up to 90 percent of astrocytes in mouse cortices in vivo.

Arenas acknowledged that because his team’s method is still an early prototype, there is still significant room for progress. “Our first focus will be to improve the reprogramming efficiency,” he said. He also noted that the group currently requires transgenic mice to selectively express the injected genes in astrocytes. In order to make this technique feasible for human testing, the team plans to explore ways to allow the virus to specifically target glial cells without a genetically modified host.

Over the last decade, glial reprogramming has piqued the interest of many researchers who see it as a promising method to treat neurodegenerative disease and brain injury by replenishing lost neurons. “During the last 10 to 15 years, this field moved incredibly fast from a strange approach to a fairly accepted approach attracting many researchers,” said Götz, who was one of the first to successfully convert glia into neurons in vitro.

“I predict that this is going to be the next frontier in regenerative medicine—we don’t need to inject any external stem cells anymore, we can just use internal glial cells,” Chen said. “I think this field will continue to thrive.”