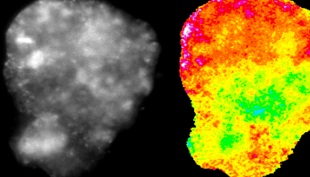 The stem cell field was rocked earlier this year by investigations into researchers’ claims to have reprogrammed somatic cells into pluripotent progenitors without the aid of transcription factors, which—given several failed attempts at independent replication, among other things—eventually led to the retraction of two Nature studies. So it was somewhat of a surprise when last month, another team claimed to have reprogrammed somatic cells toward a stem-like state by manipulating mechanical forces alone. The work, led by investigators at the University of Buffalo in New York, was published November 24 in PNAS.

Mechanical stress is “a powerful regulator of cell behavior,” explained stem cell biologist Paul Knoepfler of the University of California, Davis, in an e-mail. But Knoepfler told The Scientist he has yet to see sufficient evidence—including from the current study—that mechanical stress alone can reprogram somatic cells into pluripotent ones.

Meng, Sachs, and their colleagues reported that culturing two cell lines on a soft substrate led differentiated cells to acquire stem cell-like properties. The technique derives from work out of the laboratory of Dennis Discher, a bimolecular engineer at the University of Pennsylvania in Philadelphia whose team showed that it’s possible to steer stem cells toward a specific lineage by changing the physical properties of the cell culture matrix. In Discher’s study, published eight years ago in Cell, adult mesenchymal stem cells commited to specific cell lineages depending on the softness of the matrix on which they were grown. However, this work emphasized that transcription factors facilitated the reprogramming of somatic cells. In contrast, this latest PNAS paper has found the opposite—that growing cell lines on a soft matrix resulted in a high rate of reversion to stem-like cells.

Meng and his colleagues did not use the typical mouse primary fibroblasts in their experiments but rather relied on two immortal cell lines including human embryonic kidney (HEK) cells. Culturing these cells on a soft substrate for three days resulted in spherical embryonic bodies (EBs). Using their FRET probe to measure intracellular actin tension, the researchers showed that the EB cells had elevated actin tension compared to cells cultured on a firmer substrate—glass. The expression of two stem cell transcription factors, Oct4 and Nanog, increased five- and 150-fold, respectively, in the EB cells, the team reported.

When Kenneth Ka Ho Lee, the chief of stem cell research at the Chinese University of Hong Kong, first tried to replicate the now-retracted stimulus-triggered acquisition of pluripotency (STAP) studies, he and his colleagues saw an upregulation of Nanog and Oct4 in their negative control experiment—in which cells were perturbed mechanically by pipet but not treated with the acid bath that the STAP authors claimed could be used to reprogram somatic cells. Given this result, Lee told The Scientist that mechanical manipulation may help stimulate de-differentiation. But he added that the present study does not provide enough evidence to confirm that.

Both Lee and Knoepfler, who were not involved with the present study, said they would like to see functional assays to confirm whether these stem-like cells are indeed pluripotent. More comprehensive and quantitative gene expression analyses could help confirm stem-ness and enable comparisons to embryonic stem cells (ESCs) and induced pluripotent stem cells (iPSCs), added Knoepler.

Meanwhile, biophysicist Otger Campàs at the University of California, Santa Barbara, said the study confirms a correlation between cellular stress and stem-ness. However, causation has yet to be shown. “That mechanical forces—in contrast to the mechanics of the microenvironment—could influence cell differentiation is an interesting idea, although not proven to be true yet,” said Campàs.

Campàs noted that other researchers may find the FRET sensor for actin the Buffalo team developed useful in their investigations of cellular stress.  “I think these sensors will be widely used in the future,” he said.

In light of the stem cell controversy earlier this year, there is a heightened scrutiny of any somatic-to-stem cell reprogramming studies. “I’m concerned in this paper and, more broadly, that the term ‘reprogramming’ is being used too loosely and without definitive evidence,” Knoepler told The Scientist.