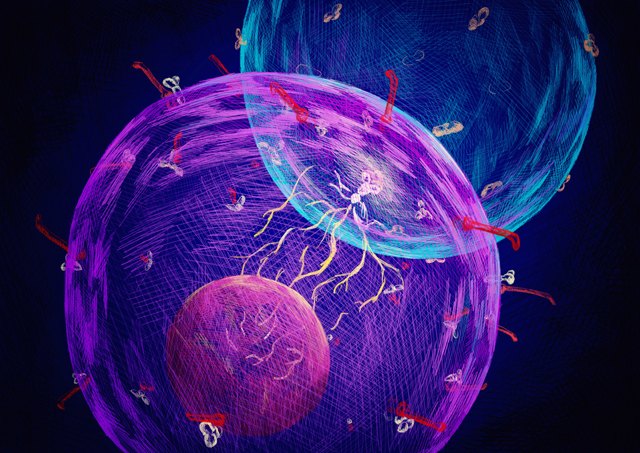 Conceptual illustration of a designer cell sensing a target cellRYO TACHIBANA, GRADUATE SCHOOL OF PHARMACEUTICAL SCIENCES, THE UNIVERSITY OF TOKYOEngineering an immune cell to recognize and kill a cancer cell is the key to chimeric antigen receptor (CAR) T-cell therapy, but modified immune cells also have the potential to cause problems for patients. One such complication, cytokine release syndrome, is an overreaction of the immune system that can cause symptoms as mild as a fever and as serious as organ dysfunction and death. In a study published today (November 13) in Nature Chemical Biology, researchers have generated nonimmune cells with the ability to kill cancer cells on contact.

“We’re entering a new era of cell-based therapies, and this is the first to extend the scope beyond lymphocytes per se,” Simon Davis, a biologist at the University of Oxford in the U.K. who was not...

I liken this to an explosion, which could eventually kill the synthetic T cell, along with a couple of other cells around, mostly cancer cells.—Martin Fussenegger,
ETH Zurich

Typical immunotherapies work by harnessing the power of the immune system. In CAR T-cell therapy, for example, patients receive a transfusion of their own T cells that have been modified to recognize a specific protein on the surface of cancer cells and then destroy the cancer. “But if you reprogram immune cells to kill cancer by fiddling around with your endogenous immune system, [there could be] some side effects,” says coauthor and bioengineer Martin Fussenegger of ETH Zurich.

To engineer a similar therapeutic using other types of cells, the research team built a cancer-detecting sensor in both HEK-293T cells, a common cell line derived from human embryonic kidney cells, and human mesenchymal stem cells. The sensor is in two parts: one that protrudes from the cell like an antenna and represses an endogenous signaling pathway and another composed of two receptors that can activate that same signaling pathway when they sense specific proteins on another cell’s surface. When the receptors come into contact with a cancer cell presenting the antigens they recognize, “this interaction displaces all the antennas to the back of the cell, so no antennas are in the immediate interface between the synthetic T cell and the target cell,” explains Fussenegger.

This displacement launches a falling-domino cascade of reactions—some endogenous and some that Fussenegger and colleagues engineered into the cell lines—ultimately resulting in the release of a drug-activating enzyme. The enzyme is then trafficked into nearby cells and, in the presence of a prodrug, converts the medicine into its active form, killing the cells. 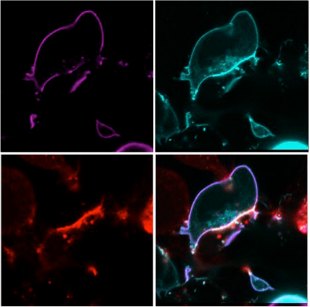 Interactions of HEK-293T sensor cells and HEK cells expressing HER2 (in red, bottom left). Magenta (top left) highlights localization of the antenna-like membrane protein, which is segregated from the cell-cell interface. Cyan (top right) labels the localization of an antigen-recognition protein. This protein accumulates at the cell-cell interface. The three images are merged in the bottom right panel. RYOSUKE KOJIMA“I liken this to an explosion, which could eventually kill the synthetic T cell, along with a couple of other cells around, mostly cancer cells,” explains Fussenegger. “So whenever the synthetic T cell has done its job, it triggers a targeted killing of the cell it recognizes, plus an explosion taking out all the other cells in the immediate surroundings. This [is] a very targeted but localized effect.”

“In terms of engineering and programming human cell behavior, this is at the cutting edge. It expands our toolkit to rewire cells,” says Krishanu Saha, a biomedical engineer at the University of Wisconsin–Madison who did not participate in the work. “All of the work in this study is in vitro in the lab, but whether that works as well, or perhaps better, inside animals needs further study,” he adds.

Fussenegger agrees that the next step is to move the system into rodent models, and if it is successful there, into preclinical and clinical trials. And the flexibility of the components that can be assembled to target a specific disease is a strength of this strategy, he says. “We chose breast cancer here, but we could go for another cancer or other cells we need to kill.”

“The only limitations I see are that it depends on non-immune cells expressing the necessary [pathway components] although these could also be ‘built into’ the cell line,” writes Davis. “A slightly more significant issue is that the way the immune system is configured, immune cells are more likely to seek out a tumor than non-immune cells, so how useful this will be as a therapy is a little uncertain, but as synthetic biology goes this is pretty neat stuff.”