3-D visualization of thymus vasculature in mice on day 14 after a non-lethal dose of radiation. The volume of vasculature in the thymus steadily decreased after damage.T. WERTHEIMER ET AL., SCIENCE IMMUNOLOGY, DOI:10.1126/sciimmunol.aal2736, 2017.The thymus, an organ in the lymphatic system, plays a critical role in immune function, producing the T cells essential to the immune response. While it is susceptible to damage, it also has the ability to repair itself via mechanisms that are not entirely clear. In a study published today (January 12) in Science Immunology, researchers identified a growth factor protein, BMP4, which is produced by endothelial cells in the inner wall of the thymus and is critical for its repair in mice. They also found that injecting these cells either into the blood stream or into the thymus itself sped up thymus recovery.

The study’s authors identified a new axis in thymus...

The thymus, which gets smaller as we age, is highly sensitive to damage from stress and infection. And while it can recover from such insults—the process is known as endogenous thymic regeneration—more serious injury, for example, from chemotherapy or radiation, can extend recovery time considerably. That can result in an increased susceptibility to infections and even cancer relapse in patients while their T-cell count is low.

“We don’t really understand . . . why the thymus shrinks as we get older, or how to make it bigger in patients where it would likely be helpful to have T cells be made,” says Bhandoola. 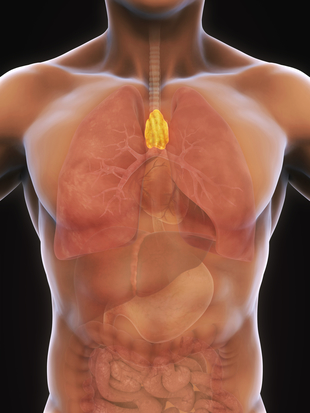 The thymus is located directly behind the sternum.ISTOCK, NERTHUZ

That the thymus can regenerate itself has been known for nearly a century, but the mechanisms that control this process have not been widely studied. So Fred Hutchinson Cancer Research Center immunologist Jarrod Dudakov and colleagues, working with researchers at Memorial Sloan Kettering Cancer Center, performed a transcriptome analysis of a section of the mouse thymus following damage from total body irradiation (TBI). They found a suite of genes that were significantly upregulated, including several already known to be involved in thymic function, as well as Bmp4.

“We’re really interested in understanding these processes of endogenous regeneration so that we may exploit them into clinically relevant and innovative strategies to boost thymic function,” says Dudakov. “This is going to be important for promoting recovery in the case of . . . chemotherapy and bone marrow transplant, where you see these really prolonged T-cell deficiencies.”

The researchers treated mice with a BMP inhibitor starting one day before TBI to determine whether BMP signaling is necessary for endogenous regeneration. The treated mice had significantly worse recovery than controls, indicating BMP’s importance in the process. In a related experiment, the researchers then injected endothelial cells into the bloodstreams of mice 72 hours after TBI, and found that doing so increased the number of thymic cells compared to controls. 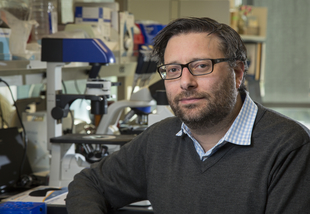 Injecting the endothelial cells intravenously was “a pretty unusual approach,” says Thomas Serwold, a Harvard Medical School immunobiologist who was not involved in the study. “If endothelial cells are indeed migrating to the thymus from the blood, that’s quite an interesting finding,” he says. It also raises the question of how the cells are finding their way to the thymus, he tells The Scientist. Nevertheless, the finding “supports the idea . . . that you need to stimulate thymic endothelial cells in order to get thymic regeneration.”

Therapies based on the research would be more likely to use isolated BMP4 than an endothelial cell line, says Serwold. “Another future interesting direction would be whether this same pathway could be used in the aging thymus,” he says. In this scenario, or in damage associated with chronic conditions, perhaps boosting BMP4 activity would also drive thymic regeneration, Serwold speculates.

“Trying to reverse some of these age-related effects [on the thymus] as well will also be quite important, and this is something we hope we will be able to take these approaches to,” says Dudakov.

The discovery may have therapeutic importance, says Bhandoola, “but what I’m even more excited about is this very basic insight into this [regeneration] axis that we hadn’t known was operating.”