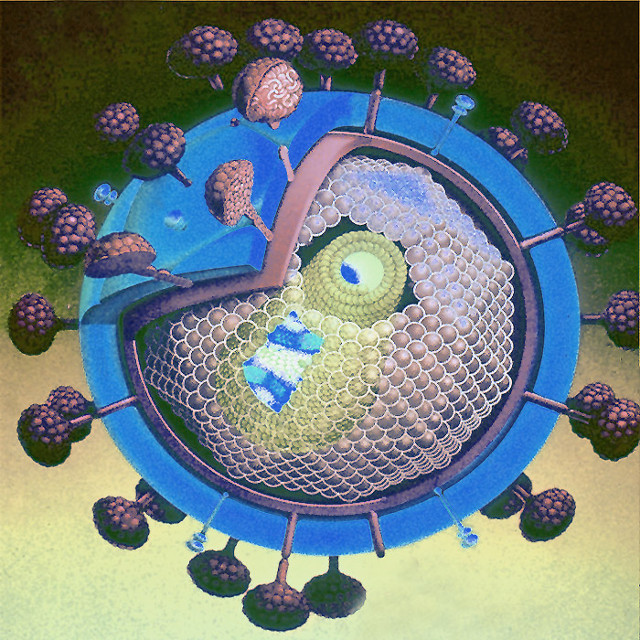 WIKICOMMONS, AJC1A minor proportion of people harbor a homozygous mutation in CCR5—a gene that encodes a receptor found on immune cells—that thwarts HIV’s attempts to get inside the cells. In an attempt to mimic this natural resistance, researchers mutated CCR5 in human fetal liver hematopoietic stem/progenitor cells (HSPCs) and showed that the cells could block HIV infection after transplantation into mice.

“These are expected observations that support prior data that targeting CCR5 can impede HIV replication and spread,” says neuroscientist Kamel Khalili who studies HIV infection at Temple University’s Lewis Katz School of Medicine in Philadelphia and who was not involved in the study. “CRISPR may be more convenient for gene editing than the prior gene editing tools used.”

The study is not the first to use gene editing to interrupt the CCR5 gene in human hematopoietic stem/progenitor cells. In a study published in 2010, Paula Cannon and...

With CRISPR, Khalili’s team previously cut out HIV from the human genome, yet there are also studies of how HIV could evade CRISPR-based anti-HIV therapy. There is yet no CRISPR-based gene editing system being tested in clinical trials in the United States.

See “How HIV Can Escape an Experimental CRISPR Therapy”

In the new work, published August 2 in Molecular Therapy, Hu Chen of the 307 Hospital of the Peoples Liberation Army, Hongkui Deng of the Peking University Stem Cell Research Center, both in Beijing, China, and their colleagues used CRISPR/Cas9 to disrupt CCR5 in CD34+ HSPCs. They demonstrated a 21 percent to 28 percent CCR5 editing efficiency, higher than the 17 percent efficiency reported using the zinc finger approach.

The work is the first to use CRISPR to achieve a long-lasting CCR5 mutation in HSCs in an animal model. “One of the advantages of CRISPR is its high efficiency on difficult to transfect cells,” write Deng and Chen in a joint email to The Scientist.

CCR5 seems to be the one Achilles heel of HIV. There may be some other targets but for now it’s the best target.—James Riley,
University of Pennsylvania

The authors were able to target a region of CCR5 that had significant differences with CCR2, a highly homologous gene subject to off-target effects using the zinc finger nuclease approach, notes James Riley, who studies how HIV infects T-cells at the University of Pennsylvania and who was not involved in the current study.

The team showed that these CRISPR-edited HSPCs could be successfully engrafted into mice and that the cells could differentiate to form the spectrum of normal immune cell lineages over the course of 47 weeks. The CCR5-edited HSPCs from the engrafted mice could then be used for a secondary transplantation into another set of mice, the researchers showed.

“The long-term reconstitution and secondary transplantation were time-consuming. It took us more than one-year monitoring of the mice to confirm the gene editing is robust in long-term HSCs,” write Deng and Chen.

Next, the researchers challenged either mice transplanted with CCR5-edited or non-edited human CD34+ HSPCs with an HIV strain that uses CCR5 to gain access to T-cells. In the mice harboring the mutated human stem cells, there was a decrease in HIV RNA in the first few weeks of infection and a smaller decline in CD4+ T-cells compared to animals transplanted with normal human HSPCs.

“This is convincing evidence that CRISPR mediated deletion of CCR5 results in the intended resistance to the CD4+ progeny of the CCR5,” writes David DiGiusto, who directs Stanford University’s Laboratory for Cell and Gene Medicine and has helped development of the zinc finger approach for disrupting CCR5, in an email to The Scientist.

Still, it is unlikely that fetal liver stem cells will be used in human clinical trials, DiGiusto and Khalili agree. “Caution should be taken interpreting [these results] as generalizable to HSPCs from adult HIV patients,” writes DiGiusto.

A caveat to targeting CCR5, notes Khalili, is that this approach “may not be a complete cure because the virus itself is not eliminated and may shift to using the CCR4 or another receptor to spread.” Targeting CCR5 will also not protect against X4 tropic HIV isolates that use the CXCR4 receptor, rather than CCR5, to gain entry into immune cells.

Yet “CCR5 seems to be the one Achilles heel of HIV. There may be some other targets but for now it’s the best target,” says Riley.

Chen, Deng, and their colleagues are planning to start a clinical trial to test whether CRISPR/Cas9-mutated CCR5 in donor CD34+ hematopoietic stem/progenitor cells can be safely infused into HIV-infected individuals and could confer a level of resistance to HIV.

Writes DiGiusto, “the ongoing clinical trials that have been developed will begin to answer the feasibility and efficacy of targeting CCR5 for HIV infection.”