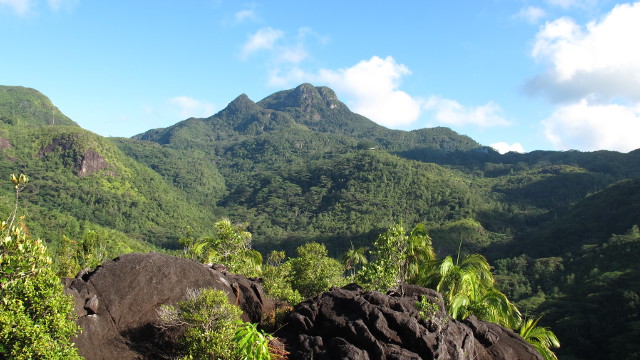 View from Bernica inselberg of the surrounding National Park on the island of Mahé, SeychellesC. KAISER-BUNBURY, TU DARMSTADT, GERMANY Many ecosystems around the globe are negatively perturbed by the spread of non-native animal and plant species that become invasive in these communities. Researchers have previously demonstrated that restoring native plant communities is beneficial, yet it has been unclear—and difficult to study—whether plant community restoration can also restore ecosystem functions, including the interactions among plants and other species.

Now, in a study published today (January 30) in Nature, researchers at the Technische Universität (TU) Darmstadt in Germany and their colleagues demonstrate that removing non-native plants within an inselberg—an isolated mountaintop—improved pollination by insect and vertebrate species and increased the growth and reproduction of native plant populations. The results suggest that even in habitats damaged by alien plants, productive pollination of native plants can be restored.

“This is an important...

“It’s a great study and it’s a good news story too,” Jane Memmott, who specializes in pollination and invasion ecology at the University of Bristol, U.K., and was also not involved in the work, wrote in an email. “Damaged and degraded habitats can be fixed so that they work again, from both a structure (species back in place) and a function (processes such as pollination are working properly) point of view.”

Ecologist Christopher Kaiser-Bunbury of TU Darmstadt and colleagues, including researchers at the Seychelles National Parks Authority on the Indian Ocean island of Mahé, removed all non-native plants—around 39,700 of them—on four hectare-size mountaintops and left four more mountaintop sites of equivalent size and inhabited by the same non-native species, unperturbed.

“The scale of the restoration is amazing,” noted Memmott.

The non-native plants made up about one-quarter of all plants in all eight sites. The researchers then waited six months and observed and recorded detailed species interactions, pollination, and fruit growth continuously over an eight-month flowering season. They focused on studying the pollination of all native plants, mapping out 64 plant-pollinator interaction networks, and recorded fruit yields of the 10 most common plant species. Altogether, the team logged more than 1,525 hours of observation.

“We wanted to know if this was effectively a gardening exercise, or whether we would see changes in [biological] processes that result in better ecosystem function,” explained Kaiser-Bunbury. “And for me, the best function with which we can test the effects of restoration on the ecosystem is pollination. If pollination services decline, the effect will cascade through all levels, affecting other species.”

“There are lots of studies looking at [one or several species], but here the researchers considered the community and its processes as a whole which is a much less common approach,” wrote Memmott. “That the researchers looked at a mixed crew of pollinators is a feather in the project’s cap.”

At six to 14 months after the restoration, the team observed an uptick in both the quality and quantity of pollination—the number of pollinator species observed increased by an average of 21.6 percent across all four of the sites, compared with the unperturbed sites. The pollinators included flies, beetles, moths, butterflies, birds, and geckos—which, according to Kaiser-Bunbury, play a major pollination role within island ecosystems. The researchers found that the pollination was productive, resulting in a higher proportion of flower setting fruit and an overall larger fruit crop within the four restored sites.

“I was surprised that, across eight sites, we could pick up such a strong interactional and functional effect [of non-native species removal],” said Kaiser-Bunbury.

“[This study] was timely as pollinators are globally declining and plant invasions are also taking place worldwide,” ecologist Anna Traveset at the Mediterranean Institute for Advanced Studies in the Balearic Islands, Spain, who also was not involved in the work, wrote in an email to The Scientist. “The approach the authors use is also timely as ecological networks have shown to be a very useful tool to detect patterns of interactions at the community level.”

While the results are largely context-dependent, Traveset said she would like to see this kind of experiment attempted in other habitats around the world.

For Memmott and Ollerton, the next questions are whether the increased flower and fruit production the researchers observed will translate into more new native plants taking root, whether the restored areas will be resistant to invasive plant species over the long term, and if the same type of approach could also work in other types of habitats.

Kaiser-Bunbury said he aims to continue to study these experimental sites to understand the long-term effects of non-native plant removal. The Seychelles National Park authority has committed to maintain these sites, he told The Scientist.

“Removing alien invasive plants is costly and time-consuming, but this paper suggests that the rewards in terms of restoring previously degraded habitats makes it worthwhile,” Ollerton wrote.

Still, Kaiser-Bunbury cautioned that ecosystem restoration is not a golden bullet. “It’s an assisted path back to a more natural balance. We don’t know how long we need to assist the process to make the native habitats sustainable.”