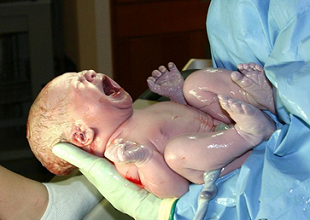 WIKIMEDIA, ERNEST FBabies born by Cesarean section (C-section) are not always exposed to bacteria and other microbes present in the birth canals of their mothers, a factor that some studies have linked to potential health risks later in life. Now, researchers have presented preliminary data suggesting that microbial communities could be at least partly restored by swabbing C-section–delivered babies with their mothers’ vaginal fluids immediately after birth. The results appeared today (February 1) in Nature Medicine.

“Despite the small number of subjects, our study shows significant differences in the bacterial communities of C-section infants exposed to the maternal vaginal fluid, whose microbiota is partially restored and more similar to that of vaginally delivered infants,” study coauthor Jose Clemente, an assistant professor at Icahn School of Medicine at Mount Sinai in New York City, told reporters during a press briefing.

C-sections also pose risks to the infants themselves, said study coauthor Maria Dominguez-Bello, an assistant professor at New York University School of Medicine, such as an increased predisposition to diseases like asthma, type I diabetes, and obesity. “The fundamental questions are then, ‘Can we restore the microbiota of Cesarean-section–delivered babies?’ And if we can, ‘Does that reduce the associated disease risk?’”

The current study—part of a larger, ongoing project in Puerto Rico—followed 18 mothers and their infants; seven of the babies studied were born vaginally, while 11 were delivered by scheduled C-sections. In the C-section group, four mothers who volunteered for the procedure and were deemed free of infections that might harm the babies, incubated a sterile gauze in their vaginas for one hour before the operation. Then, within two minutes of birth, the babies were swabbed with the gauze first over their mouths, then their faces, and then the rest of their bodies.

But this conclusion—based on data from just four exposed babies in a nonrandomized trial—may be premature, said Anita Kozyrskyj, an associate professor of pediatrics at the University of Alberta, Canada, who was not involved in the work but—like many microbiome researchers—was aware of the study’s upcoming publication.

“The four women who volunteered for the intervention, it’s possible that they were highly interested and motivated” to restore their newborn’s microbiota she said, adding that unreported behavior—such as engaging in prolonged skin-to-skin contact after delivery—could itself promote differences in the infants’ microbial communities. “That’s the issue with having a report on such a small number that could be skewed by one or two infants. It could be due to other factors.”

Josef Neu, a professor of pediatrics at the University of Florida, shared Kozyrskyj’s concerns about the study’s sample size. He said the report does not itself merit a change in clinical practice. “As a physician taking care of babies, I think that a lot more needs to be done before we make this as a standard of care recommendation,” Neu said.