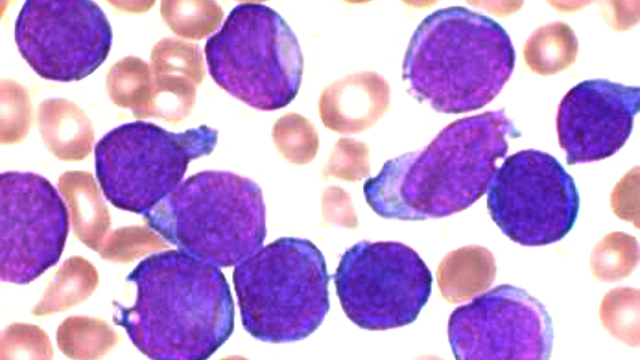 Acute lymphoblastic leukemia is one of the cancer types for which MELK-inhibitors are being tested.WIKIMEDIA, JAMES GRELLIERA protein thought to be essential for cancer cells may not be so essential after all, according to a study published today (March 24) in eLife. Researchers at Cold Spring Harbor Laboratory (CSHL) in New York used CRISPR-Cas9 to knock out the gene for maternal embryonic leucine zipper kinase (MELK), finding no effect on cancer cell proliferation. The result contradicts the conclusions of previous studies regarding the protein’s role, and suggests that MELK-inhibiting drugs—currently in preclinical and clinical development—may be killing cancer cells via off-target mechanisms.

“From the literature, there’s a lot of evidence that this is a very suitable therapeutic target,” said Mathieu Bollen, a cancer researcher at the University of Leuven, Belgium, who was not involved in the study. “What they show here is that the fitness of...

First identified in the late 1990s, MELK has been linked to various biological processes, from programmed cell death to neurogenesis. Levels of MELK are often abnormally high in tumor cells, and multiple studies have reported that blocking production of the protein using RNA interference (RNAi) can halt cell proliferation in several cancer types. As a result, MELK inhibitors have become the focus of several preclinical studies and early-stage clinical trials.

It was this research that led CSHL’s Jason Sheltzer and colleagues to adopt the MELK gene as a control when designing experiments to look for other genes critical to cancer development. “There was all this previous literature that MELK was in fact a cancer dependency,” Sheltzer told The Scientist. “So in our initial conception of our experiments, we had MELK in as a positive control—for what we thought was a characterized and known cancer dependency.”

The team intended to knock out various poorly characterized genes in several human cancer cell lines. However, instead of using RNAi, which inhibits the production of a protein at the RNA level, the researchers took advantage of a more modern technology, the CRISPR-Cas9 gene-editing system, which disrupts normal gene expression by introducing mutations at specific regions of DNA.

Mutating MELK using CRISPR-Cas9, the team expected, would inhibit proliferation, just as MELK knockdown with RNAi had done. But it didn’t.

“We found that these mutations had no effect whatsoever on cancer cell viability or on cancer cell growth, or on several other phenotypes that we tested,” Sheltzer said. Investigating further, “we could not find any evidence that MELK was a cancer dependency in any of the 13 cancer cell lines that we looked at.”

“The findings are fairly robust,” said Alexey Terskikh, an associate professor at Sanford Burnham Prebys Medical Discovery Institute in La Jolla, California, who was not involved in the work, adding that the discrepancies between these and previous findings are probably explained by RNAi’s tendency to introduce off-target effects.

“Am I surprised that an [RNAi] experiment, even done well, might have given the wrong result? No I’m not,” he said, noting that RNAi is known to influence multiple pathways that can be toxic to cells. “There are plenty of well-done RNAi experiments which, when redone with CRISPR, give a different result.”

But it wasn’t just previous RNAi results that needed explaining. Sheltzer noted that some small-molecule MELK inhibitors have also shown success in blocking cancer cell proliferation—purportedly as a direct result of inhibition. To find out more, the researchers created cancer cells lacking MELK altogether, and treated them with OTS167—a MELK inhibitor being evaluated in clinical trials. “We found that OTS167 was still effective,” he said. “It’s killing cells even when there’s no MELK present.”

In an email to The Scientist, a spokesperson for Kawasaki City, Japan-based OncoTherapy Science, the developer of OTS167, wrote: “We are not in a position to give you any comment about [another] group’s paper.”

Sheltzer said the team now suspects that OTS167, like RNAi, might harm cells via off-target mechanisms. This explanation is certainly plausible, said Bollen, who has collaborated with researchers at Janssen Pharmaceutica on MELK inhibition. He pointed to two recent studies with corroborative findings: one suggesting that OTS167 acts upon multiple kinases, and another showing that MELK-deficient mice have no obvious phenotype to distinguish them from wild-type mice.

The results of the present study do not necessarily spell bad news for OTS167. For one, Bollen noted, MELK’s role in the cell is certainly complex, and the results don’t discount the protein as a valid target—perhaps in combination with others—for cancer therapy. What’s more, Sheltzer said, “some of the most effective drugs used to treat cancer are very effective but we don’t fully understand their mechanism.”

But researchers might reconsider how they monitor the drug’s effects, he added. “If investigators in these clinical trials are using MELK expression as a biomarker for sensitivity to this drug, the data that my lab has produced suggests that that might not be the most effective way of identifying who would respond to this drug and who wouldn’t.”

The group is now interested in using CRISPR to knock out other genes thought to be critical in cancer, Sheltzer said, adding that although the gene-editing technique can also produce off-target effects, it could provide a tool to validate drug targets before therapies move into trials.

In the meantime, however, both Mitchison and Terskikh noted the importance of reproducing the team’s MELK results in vivo, and in other labs. “I have a feeling this paper will be seen as correct in hindsight,” said Mitchison. “But there will have to be replications of those experiments. I don’t think the dust has settled quite yet.”