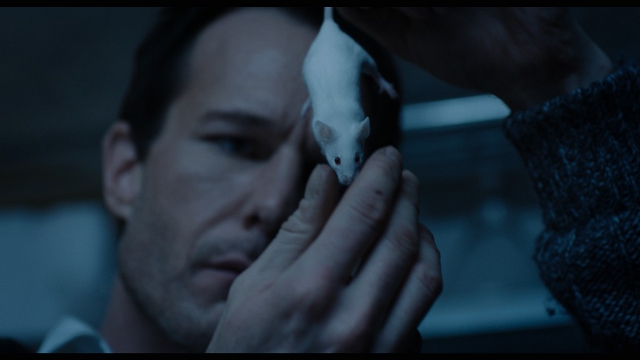 Errors of the Human Body character Geoff Burton, played by actor Michael EklundCOURTESY OF ERON SHEEANAfter an unknown disease takes his infant son from him, a grief-stricken Geoff Burton, pours his own genetics research into identifying the mutation that caused his son’s gruesome illness. Burton’s former colleague realizes the gene’s potential to accelerate natural regeneration in the axolotl. Then, a Voldemortesque colleague steals the gene from the axolotl lab and develops a technique to splice it into to mouse DNA. The potential for treating human disease seems miraculous.

So far, the story is more science drama than science fiction. Then, Burton becomes infected with the gene upon being bitten by one of the engineered mice, which he had stolen from Voldemort’s secret lab in the basement of their research institute. At first the gene therapy appears to be working: Burton realizes he has an amazing ability to heal....

And Errors of the Human Body, doesn’t leave lovers of the last-minute twist wanting: read about the surprise ending here.

The dramatic plot is accompanied by ominous music, high-energy party and fight scenes, and the bizarre appearance of the movie’s antagonist. The film is entertaining, and director Eron Sheean manages to capture some true aspects of life as a scientist, even amidst the story’s many exaggerations.

The film’s laboratory setting is believable, for example (with the exception of the secret basement lab, cornered off with a plastic tarp), due in large part to the fact that the movie was filmed at the Max Planck Institute of Molecular Cell Biology and Genetics (MPI-CBG) in Dresden, Germany, where Sheean spent a couple of years as artist-in-resident. And discussions between the film’s researchers are not dumbed down to an unrealistic level.

Errors also explores some of science’s most well-trodden truisms, like “a discovery is not a cure” and “publish or perish.” Sheean highlights, and again exaggerates, aspects of the scientific culture, touching on the pressure scientists feel to produce valuable data. The researchers in the movie are possessive of their discoveries, and the competition gives rise to a volatile situation.

“I think the movie is a caricature really,” says Marino Zerial, a director of the MPI-CBG. “There is always some element of competition . . . but I don’t think it goes to that extreme, thank God.” However, with the budget cuts many researchers are currently facing, “this is becoming much more dramatic,” he notes.

The film also pushes the viewer to consider some deep ethical questions.  “My hope [is] that people . . . will go beyond the mere science fiction of the movie and think more about the psychological, meditative aspects,” says Zerial. “We are vulnerable to mutation, to disease. How do we cope internally? How do we fight it? How do we come to terms with our suffering?”

Of course, these issues are raised through a story in which gene transfer resulted from the bite of a transgenic mouse. Gene therapies are delivered by viruses, but these viruses have been modified to be non-infectious. Then again, that wouldn’t necessarily prevent vector transmission in a “single hit manner,” says University of Florida molecular virologist William Hauswirth, in an email to The Scientist.

“If the animal bite took place within a few days of vector treatment, the vector was made with minimal to no safety forethought, and the vector was delivered to an anatomical site that would allow spread to saliva, then yes it would be possible,” he said—“but only theoretically by not very bright people.”

SURPRISE ENDING: Burton wakes up in a hospital bed after a failed suicide attempt, having completely recovered from his disease thanks to a normal, healthy immune system. As he is told of his spontaneous recovery, the realization sinks in that his son probably would have gotten better as well—had Burton not decided to put the baby boy out of his misery.