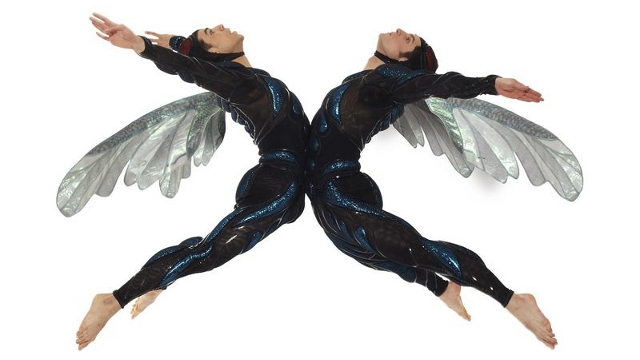 The concept of dancing animals usually conjurs images of moribund swans or perhaps YouTube videos of cats bobbing in time to music and two-stepping parrots. Those with more refined tastes might recall the “Carnival of the Animals,” a ballet set to Camille Saint-Saëns' 1886 suite. Regardless, you’re unlikely to imagine insects, since a buzzing swarm of flies or a stream of ants rushing to a sugar bowl does not exactly seem graceful or rhythmic.

Why this glaring absence of bugs in dance? Insects are beautiful, extravagant in their movements, and full of drama. Paul Taylor’s “Gossamer Gallants,” which premiered in November 2011, captures the vigor and majesty of the six-legged set, and it does so without overly literal interpretations of insect...

And yet, the performance perfectly reflects the quarrelsome athleticism inherent in displaying male insects. A group of men strut and shove, vying for female attention. It looks completely natural, completely masculine, whether the dancers wear their skeletons inside or out. The similarities make sense from an evolutionary perspective. After all, both dance performances and insect displays have the same goal: “Look at me! Pay attention to me! Think of only me!”  In a particularly delicious interval, the male dancers lay their capes on puddles for their female counterparts to walk upon. If insects had detachable capes, they would do that in a heartbeat. Well, if they had the kind of hearts we usually associate with that kind of beating. Courtship is courtship, no matter to which phylum or class a hopeful suitor belongs.

From an entomological perspective, the only things missing from the performance are the two elements that make insect mating both savage and poignant. First is the absence of violence—of limbs torn from the thorax, of combatants thrown to the forest floor after a climactic battle on a branch. Fireflies, the insects that seem to have most specifically inspired “Gossamer Gallants,” are particularly rapacious: in some species, a female mimics the flash pattern of another species, luring the foreign males in with the promise of a tryst. Then, once the male has approached, she pounces and devours him. Real insect sex is not for the faint of heart, and that applies to both observers and participants. And second, after all the seduction and violence, most insects—at least the males—come away with nothing. The dancers in “Gossamer Gallants” are paired in a neat series of pas de deux, but in real life, insects display and sing, pose and fight, with a profligate futility. Most males never find a mate, most females lay eggs that die, and of those that hatch, most of the young will die as well.

Insect reproduction, from courtship to hatching of offspring, is always filled with despair along with acts of daring, although the insects keep on trying. Of course, given the procreative prowess of many insects, this frequent failure is not a bad thing, at least if you want to leave room for the rest of us.

Marlene Zuk is an evolutionary biologist at the University of Minnesota. Her research examines sexual behavior and evolution, mostly in insects. She has written several books, including Riddled with Life, Sex on Six Legs, and her most recent, Paleofantasy. Zuk consulted with Isabella Rossellini on the actress’s new series of short films, “Mammas,” about animal mothers.