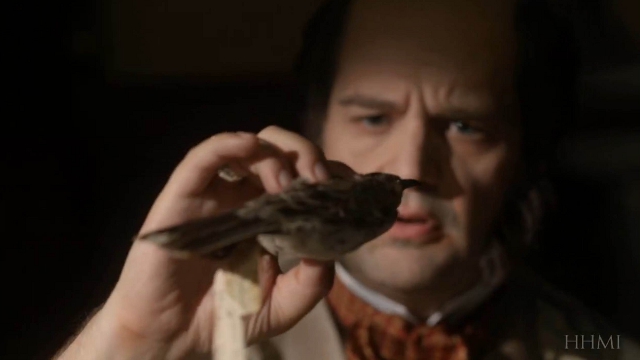 Charles Darwin examinging a mockingbird he collected on the Galapagos Islands, as depicted in the first of three films in The Origin of Species seriesHHMIIn 1852, Alfred Wallace, one of evolution’s greatest theorists, spent 10 days on a lifeboat after his ship burned and sunk, swearing he would never sail again—two years before he began his famous eight-year, 14,000-mile journey to the Malay Archipelago that solidified his ideas about natural selection. Charles Darwin, Wallace’s wealthy and slightly older contemporary, also hated sailing, and succumbed to violent bouts of seasickness during his five-year cruise on the HMS Beagle. When he was feeling healthy, however, Darwin was a true adventurer, not only collecting species from around the world, but eating them, too. Apparently, the famed theorist thought the Argentinian specialty of roast armadillo tasted like duck.

These are just a few of the interesting tidbits I learned from three...

The films, collectively dubbed The Origin of Species series, debuted at the National Association of Biology Teachers (NABT) conference in Atlanta, Georgia, on Wednesday (November 20). According to the films’ host, Sean Carroll, HHMI vice president for science education and a professor of molecular biology and genetics at the University of Wisconsin, the project was motivated by requests from teachers. “They found speciation difficult to teach,” he said. “The question of how traits get modified by natural selection, I think that’s pretty easy to grasp, but how do we end up with different species . . . that’s fuzzier.”

To address this important biological issue, Carroll takes viewers on a series of adventures, from Wallace’s and Darwin’s 19th-century explorations, to the four-decade-long field study of the Galapagos Island finches led by husband-and-wife team Peter and Rosemary Grant, to the work of Harvard biologist Jonathan Losos on the convergent evolution of lizards in the Caribbean.

“I think that the best way for somebody to encounter these ideas and this information is to try to get them into the shoes of those naturalists,” Carroll told The Scientist. “That’s the story-telling challenge.” It also exposes students to the nature of science and the scientific process, he added. “Those are beats we don’t want to skip. . . . We’re trying to unpack that thought process.”

Through these stories, depicted as dramatic reenactments, on-film experimentation and exploration with present-day biologists, and computer-animated infographics, the films introduce concepts such as adaptive radiation, reproductive isolation, micro- and macroevolution, speciation, and phylogenetics. It’s a whirlwind introduction to the theories of evolution and speciation, but one that is elegantly crafted to hold the attention of not just the young audience for which it was intended, but also an educated evolutionary biologist such as myself.

“[The HHMI videos] are visually interesting, and the content is presented in an engaging way that makes you want to keep watching,” said neurophysiologist and science educator Kirsten “Kiki” Sanford, who is host of the popular science radio show, This Week in Science. “I think that coupled with the supplementary teaching materials, these videos will be an incredibly valuable classroom asset.”

The Origin of Species series is the latest in a string of HHMI education films that have been released in the last two years, and target a broad audience from middle school to college. In collaboration with the scientists portrayed in the films, HHMI has also developed educational materials that teachers can use when showing the films to their students.

“[The films] are a great hors d’oeuvre, but they’re not sufficient,” Carroll said. “You really have to have the other materials there so that the film becomes a catalyst for further learning in the classroom.”

Of course, as Sanford noted, “I’m sure people will enjoy them outside of the classroom as well. . . . I really found myself excited to hear the next bit of information the narrator would share about Darwin and Wallace, and wishing I could go hangout with Dr. Carroll on his adventures,” she said. And I’d have to agree.