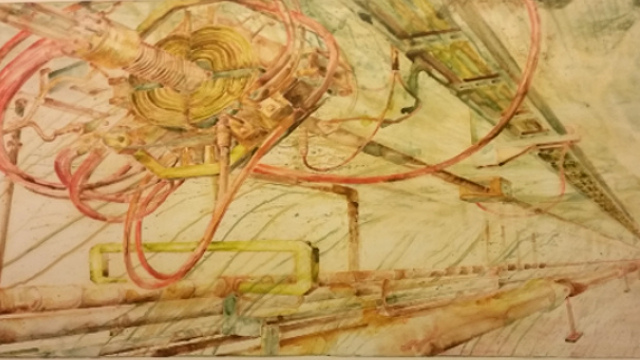 Jonathan Feldschuh’s “Large Hadron Collider #31 (SLAC)”AJAI RAJIn their own ways, science and art are both concerned with exploring what the human eye can’t always see. The awe that scientists experience at the elegance and intricacy of nature puts them in good company with artists, who often seek to render visible the beauty and humor hidden amid the minutiae of everyday life. The inaugural exhibit at New York City’s SciArt Center—which first opened its doors on Friday (June 20)—showcases artistic work that draws on the tools and techniques of science for inspiration. “What Lies Beneath” explores hidden worlds, from the subatomic to the geologic and more.

Jonathon Wells’s “Vermont-Shrewsbury (hometown)” takes landscape photography to soaring heights and subterranean depths. Wells’s composite work combines aerial photography of the artist’s hometown in rural Vermont with cross-sectional photos of the geologic formations beneath the Earth there. Wells, a geologist, conveys the landscape as a scientist sees it, delving beneath the pastoral beauty above to show the forces at work under the surface. Each of his composite photographs took Wells around a year or two to create—he went to painstaking lengths to ensure that they accurately depicted the rock formations undergirding his landscapes, even consulting local geological surveys for some informal peer review. His work recalls the origins of geology, which relied on engravings and sketches to collect data before the invention of more sophisticated instruments.

As part of her “Modular Systems” collage series, Laura Splan pokes fun at the misuse of science for marketing purposes. To achieve this, Splan collected and rearranged images of scientific instrumentation found in consumer health magazines to expose the absurd patina of pseudoscience that often informs medical products. These collages are a mash up of marketing and medicine. Splan said she chose this medium to illuminate the deception that underlies some medical marketing.

Other works on display include Daniel Hill’s depictions of sound waves traveling through space, which are simultaneously stark and psychedelic; Jim Toia’s collaborations with nature, in which the artist enlisted fungal spores to “draw” by migrating across paper, as well as work featuring spider webs and tree limbs; and Steve Miller’s inkjet dispersion paintings created from X-rays of Amazonian plants and river fish. Taken together, “What Lies Beneath” offers a window into fascinating hidden worlds, evoking emotional and interpretive responses from what’s typically seen as mere data.

“What Lies Beneath” will be on display at the SciArt Center in New York City through July 5. The center is hosting a discussion among artists Jonathan Feldschuh, Jonathon Wells, and Daniel Hill on June 26.