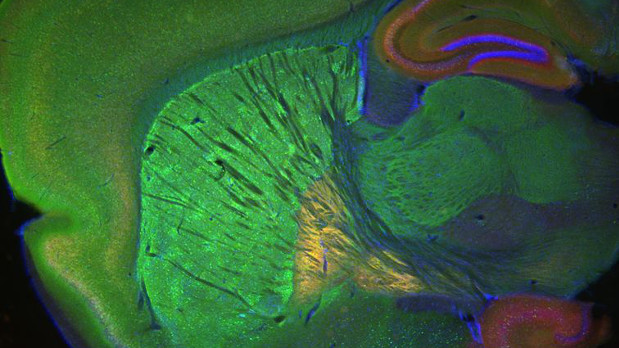 Sagittal section of an Nr4a1-eGFP transgenic mouse stained for the CB1 cannabinoid receptor and DAPI to show nucleiWIKIMEDIA, NIHThe mammalian central nervous system is studded with receptors that bind with a small number of endogenous cannabinoids, as well as those found in marijuana. Marijuana is known to promote heightened social connection, but the mechanism for this phenomenon was not well understood. According to a paper published today (October 26) in PNAS, it is social interaction between mice plus oxytocin—the hormone involved in social bonding—that drive cannabinoid activity in the animals’ brains.

“It was a great surprise to see how powerful the effects of social contact are on production of anandamide in select regions of the brain,” said study coauthor Daniele Piomelli, a neuroscientist at the University of California, Irvine.

To study the behavioral effects of oxytocin, endocannabinoids, and social interaction, Poimelli and his colleagues isolated mice for 24 hours, then allowed them to either socialize with other mice or remain in isolation for another three hours. The researchers found that the mice that were allowed to socialize had higher levels of anandamide, but not 2-AG, in their nucleus accumbens.

“I was personally very surprised by the fact that it’s such a simple thing—just taking an animal, isolating it for three hours, then putting it back with its buddies, or not—would make such a difference in a single chemical in a specific area of the brain,” Piomelli told The Scientist.

In mice lacking an enzyme that degrades anandamide, fatty acid amid hydrolase (FAAH), the researchers observed more prosocial behavior. When the researchers used a pharmacological compound to block FAAH, they also saw prosocial behavior, even among the mice that were isolated. Piomelli and his colleagues also found that stimulating oxytocin receptors promoted the action of anandamide, while blocking oxytocin receptors seemed to stifle anandamide. “The effects of oxytocin are virtually entirely dependent on the ability of oxytocin to drive the formation of anandamide,” Piomelli said.

The finding may also point to a possible treatment for autism spectrum disorders, which can involve social-interaction difficulties. (The team initially homed in on the interaction of oxytocin and anandamide while studying autism mouse model of autism.)

“The convincing evidence that enhancing the activation of CB1 receptors by endogenously released anandamide, but not by the endocannabinoid, [2-AG] . . . could be a new strategy for ameliorating some of the unwanted symptoms of disorders like autism,” Roger Pertwee, a neuropharmacologist at the University of Aberdeen, U.K., who was not involved with the study, wrote in an email. “The important next step will be to test the clinical importance of these findings in studies performed with human autistic subjects—to test whether at least some of their autistic symptoms can be ameliorated by a FAAH inhibitor.”

Piomelli said he would like to further explore why anandamide and 2-AG appear to act so differently in relation to oxytocin. The latter endocannabinoid is much more abundant than anandamide. “Anandamide is like the little brother and 2AG is like the big brother,” Piomelli said. He and his colleagues are looking into whether 2-AG plays a role in other forms of reward-oriented behavior.