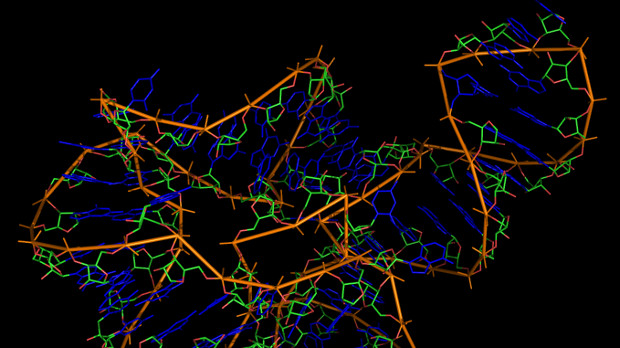 Part of a riboswitchWIKIMEDIA, FDARDELResearchers at the pharmaceutical company Merck have identified a new bacteria-killing compound with an unusual target—an RNA regulatory structure called a riboswitch. The team used its drug, described in Nature today (September 30), to successfully reduce an experimental bacterial infection in mice, suggesting that the molecule could lead to the creation of a new antibiotic. Moreover, the results indicate that riboswitches—and other RNA elements—might be hitherto unappreciated targets for antibiotics and other drugs.

“Finding an antibiotic with a new target . . . has always been one of the holy grails of antibiotics discovery,” said RNA biochemist Thomas Hermann of the University of California, San Diego, who was not involved in the work. “It looks like that’s what the Merck group has now accomplished.”

The team’s research began with the idea of finding a compound that blocks the bacterial riboflavin synthesis pathway. Riboflavin is...

The team devised a simple but “very smart phenotypic screen,” said Hermann. The researchers tested roughly 57,000 antibacterial synthetic small molecules on cultures of E. coli bacteria looking for ones whose killing ability was neutralized by the presence of riboflavin. “If the effect of that antibacterial was suppressed by riboflavin,” said Howe, “then we had a good chance that the small molecule . . . was targeting the riboflavin pathway.”

The team found one molecule that fit the criteria and called it ribocil. To investigate the molecule’s mechanism of action, they applied it to cultures of E. coli cells until colonies emerged that were resistant to its effect. The researchers then sequenced the whole genomes of each of the resistant bacterial strains to find which genes were mutated.

The majority of drugs target proteins, explained Howe, “so we assumed that the mutations would be in one of the enzymes in the riboflavin synthesis pathway.” But as it turned out, while all of the 19 resistant strains did have mutations in a gene called RibB (which produces one of the riboflavin synthesis enzymes), the mutations did not affect the protein itself. They altered a non-coding part of the messenger RNA transcript: the riboswitch.

Riboswitches are regulatory elements at the beginning of messenger RNA transcripts. They bind molecules—normally metabolites—that typically suppress the transcript’s expression. “So instead of regulating the enzyme itself, [ribocil] is regulating the production of the enzyme,” Howe said.

Indeed, through reporter assays and crystallization experiments, the team confirmed that ribocil directly interacted with the RibB riboswitch, preventing expression of the protein.

“Ninety-nine-point-nine percent of drug targets are proteins,” said Hermann, “but they were prepared for the 0.1 percent outcome, and I think that’s what I really liked about this work.”

The team went on to tweak ribocil’s chemical structure, improving its killing efficiency and prolonging its effectiveness inside the body. The researchers then showed that this enhanced version of ribocil could effectively reduce bacterial burden in mice infected with a weakened E. coli strain; the bacteria are unable to efficiently expel drugs.

Weakened E. coli were used because wild-type E. coli are adept at ejecting ribocil and other compounds before they can take effect. Finding a way to keep ribocil in the bacteria and making other improvements will be necessary before it can be used as an actual antibiotic, explained Howe.

“I’ve [got] no idea if ribocil will end up being a drug candidate,” biochemist Gerry Wright of McMaster University in Ontario, Canada, wrote in an email to The Scientist, “but the work is a proof of principle, which is very important, and it makes us look to new areas of biology as targets for antibiotics.”