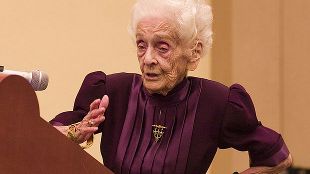 Rita Levi-Montalcini speaking at the international NGF meeting 2008: Katzir Conference on Life and Death in the Nervous System, at Kfar Blum, IsraelFLICKR, AUDREY_SELRita Levi-Montalcini, a neurophysiologist who shared the Nobel Prize in 1986 for the discovery and isolation of nerve growth factor, died on Sunday (December 30). She was 103 years old.

Levi-Montalcini, in collaboration with colleague Stanley Cohen, developed an assay for purification of nerve growth factor (NGF) in the early 1950s, when methods and tools used to purify proteins were limited.

“It would be impossible to exaggerate the importance of the having discovered the concept of growth factors, which are now known to regulate every aspect of embryonic development,” said David Kirk, a retired developmental geneticist who used to work in a lab near Levi-Montalcini’s lab at Washington University in St. Louis.

In the early 1940s, after Levi-Montalcini completed her medical degree at the University...

Inspired by a 1934 article by Viktor Hamburger, which reported on the effects of limb removal in chick embryos, Levi-Montalcini did lab research from her temporary home in Florence. From her studies, she found that when she removed a limb bud from a chick embryo, the number of nerve cells that innervated the limb-bud area was significantly reduced. She hypothesized that something in the limb bud controlled how many nerve cells found their way to the limb-bud target.

Levi-Montalcini moved to Washington University in St. Louis at the end of the war to collaborate with Hamburger and determine whether her hypothesis was correct. In one key experiment, she showed that a mouse sarcoma (the source for NGF), when implanted into a chick embryo, caused overgrowth of nerve fibers from the sensory and spinal nerve centers. The study was published in the Journal of Experimental Zoology in 1951 and was cited 460 times, according to Web of Knowledge.

“It was the first time that a growth factor had been implicated in the growth and organization of the nervous system,” Eric Shooter, a long-time colleague of Levi-Montalcini’s and a professor emeritus at Stanford University, told The Scientist. “It was an amazing discovery.”

“She had fantastic observational skills,” Kirk said. “She could, as the saying goes, think with her eyes, and see with her mind.” After her initial finding, “she made many major discoveries, with respect to how nerve growth factors worked and how other growth factors worked, and they all depended on being able to look at microscopic specimens and see the whole developmental program worked out in front of her,” Kirk added.

Levi-Montalcini stayed at Washington University for 30 years. In 1954, Cohen, Hamburger, and Levi-Montalcini developed an assay for purifying NGF. The assay measured nerve fiber outgrowth from the sensory ganglia of a chick embryo. Levi-Montalcini and colleagues exposed the ganglia to different dilutions of an NGF solution. They identified NGF in snake venom, and then in mouse submaxillary glands.

In 1962 Levi-Montalcini established a research unit in Rome, dividing her time between Rome and St. Louis. In the 1970s, she was the director of the Institute of Cell Biology of the Italian National Council of Research in Rome. In 1986, she and Cohen shared a Nobel Prize in Medicine for discovering and isolating growth factors.

At the time of her death, Levi-Montalcini was the oldest living Nobel laureate.

“She was a very vivacious lady,” Shooter said. “Very smart, very easy to get on with, very dynamic.”