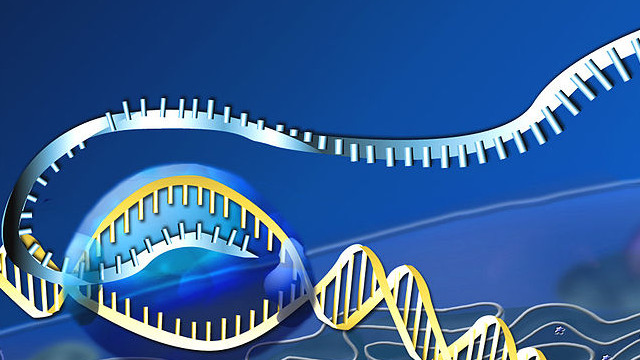 WIKIMEDIA, NICOLLE RAGER, NATIONAL SCIENCE FOUNDATIONFusing an RNA-editing enzyme to an RNA-targeting Cas protein has enabled researchers to edit specific nucleotides within RNA molecules in human cells. The approach, called RNA Editing for Programmable A-to-I replacement (REPAIR), is described today (October 25) in Science, and has the potential to serve not only as a research tool, but as a temporary correctional therapy for disease-causing mutations, the researchers propose.

“This work is an impressive study from a highly productive research group that suggests the possibility of editing RNA transcripts to alter their coding potential in a programmable manner,” David Liu, a chemical biologist at Harvard University who was not involved in the project, writes in an email to The Scientist. “For applications that are best addressed through a transient change in a target RNA's sequence, this approach has strong potential,” he adds. Liu himself has a...

The CRISPR-Cas9 system—a bacterial antiviral immune mechanism first discovered in Streptococcus thermophilus—is now widely used as a DNA editing technique, wherein the DNA nuclease Cas9 is directed to cut any DNA sequence of choice. By searching for similar immune systems in other microorganisms, researchers went on to discover a Cas9-related enzyme called Cas13 (originally termed C2c2), which, in 2016, the Broad Institute’s Feng Zhang and colleagues revealed targeted RNA not DNA.

Further developments with Cas13 led to a Nature paper earlier this month in which Zhang’s team showed that one family member, Cas13a, could be used in mammalian cells to knockdown particular messenger RNAs with similar efficiency to RNA interference. The team also engineered a catalytically inactive version of Cas13a that, when fused to a fluorescent protein, could be used to track RNAs of interest.

In the new study, Zhang ‘s team asked, “What else can we do with a catalytically dead Cas13 enzyme?” says Omar Abudayyeh, a student in Zhang’s lab and coauthor of the study. One idea was to use the protein’s RNA-targeting capacity to recruit an RNA-editing enzyme that would allow the researchers to make defined nucleotide alterations at specific sites.

RNA editing is a form of transcript processing involving, among other things, enzymatic regulation of nucleotide substitutions. Enzymes called adenosine deaminases acting on RNA (ADAR), for instance, convert adenosine into inosine—a nucleotide that is functionally equivalent to guanosine. Zhang’s team has now created a fusion protein between the catalytic domain of ADAR and a catalytically inert Cas13b—another Cas13 family member—with the ability to target any RNA of interest in human cells. Indeed, they used it to revert two disease-associated G-to-A mutations—one that causes a form of diabetes, and another that causes Fanconi anemia—in two separate messenger RNAs.

Therapeutically speaking, for certain genetic diseases, editing the genome to permanently fix a mutation may be more desirable. But RNA editing might be preferable “in situations that require only short-term changes in gene expression,” suggests RNA biologist Mitchell O’Connell of the University of Rochester in New York who did not participate in the research. As examples, he lists “organ transplants, where a short phase of rejection prevention may be necessary, temporary reductions in inflammation, and certain acute diseases.”

The immediate power of the REPAIR system, O’Connell says, is as a research tool. Introducing specific sequence changes into RNA molecules could allow researchers to answer questions about alternative splicing mechanisms, translation, and even editing, he says. “There’s a lot of scope.”

The tool itself could be further developed, adds computational biologist Eugene Koonin of the National Center for Biotechnology Information who also was not involved in the study. “This paper is not the end of the road,” he says. It’s possible that Cas13b could be fused to a variety of editing enzymes that would allow a range of different sequence changes. The possibilities are numerous, Koonin says, and “the best is still to come.”