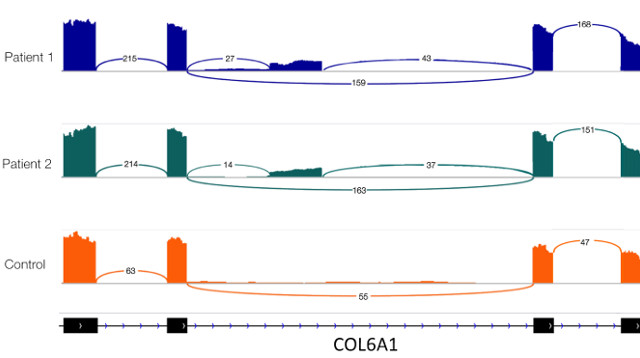 Independent splice-creating mutations in an intron of the COL6A1 in two patients with collagen VI myopathyBERYL CUMMINGS, HARVARD UNIVERSITYRNA sequencing (RNA-seq) of affected tissue can be used to discover mutations likely responsible for Mendelian disorders, according to researchers from the Broad Institute of MIT and Harvard and their colleagues. A team led by Daniel MacArthur of the Broad Institute used RNA-seq on skeletal muscle biopsies from patients with rare, undiagnosed genetic disorders to uncover novel disease-causing mutations that are not easily identified with DNA sequencing, such as pathogenic splice site variants. The study, published in Science Translational Medicine today (April 19), is the largest-to-date application of transcriptome sequencing to a cohort of patients with undiagnosed diseases to identify previously unknown mutations associated with inherited disorders.

“This is a really great study that demonstrates beautifully the use of RNA sequencing in discovering and charactering relevant human disease mutations,” said Tuuli Lappalainen...

“There has been a huge step forward in how quickly we can do DNA sequencing to diagnose rare genetic diseases. But that approach still cannot identify the relevant mutation in about 60 percent of cases,” Jeffrey Barrett of the Wellcome Trust Sanger Institute who was not involved in the work told The Scientist. “This new paper is a really nice example of one way to make progress to find these relevant variants.”

To validate their transcriptome sequencing approach, MacArthur, Harvard graduate student Beryl Cummings, and a team of researchers from elsewhere in the U.S., plus the U.K., Australia, and Canada first performed RNA-seq on skeletal muscle samples from 13 individuals with previously diagnosed genetic skeletal disorders. The team compared these RNA sequences to those in an RNA-seq dataset from 180 healthy individuals that took part in GTEx research. The group then performed the same analyses on skeletal muscle samples from 50 patients with undiagnosed genetic skeletal conditions.

“The benefit of RNA sequencing for diagnosing a genetic disorder is that we can now look directly at the impact of a DNA change on gene expression and RNA splicing,” MacArthur told The Scientist.

The team was able to identify disease-causing genetic mutations in 17 cases, yielding a 35 percent diagnosis rate overall. The types of mutations identified included new splice site variants located deep within a gene’s noncoding region and disrupted splice sites not adjacent to an exon. For example, in four cases, the team was able to identify previously undiscovered disease-causing changes in the dystrophin gene in patients with Duchenne muscular dystrophy. The analysis also revealed a previously unknown severe collagen VI–related myopathy intron mutation in four patients who had tested negative by standard DNA sequencing of the collagen VI genes. The researchers went on to identify this mutation in 27 additional patients who were part of a larger collagen VI–related myopathy cohort.

But in cases when it is not possible to obtain diseased tissue, such as for brain disorders, MacArthur and colleagues are now exploring another approach: obtaining patients’ skin or blood samples and turning those into induced pluripotent stem cells (iPSCs) that can then be differentiated into neurons or other cell types of interest.

And for the approximately 50 percent to 60 percent of patients with genetic disorders of unknown causes, pinpointing disease-associated mutations in noncoding regions of the human genome could help, said Barrett. “As we study genetics of many different human diseases, there will also be those that don’t fall into the classical Mendelian disorders that result from a single mutation, but that have more-diffuse genetics involving multiple genes,” he said.