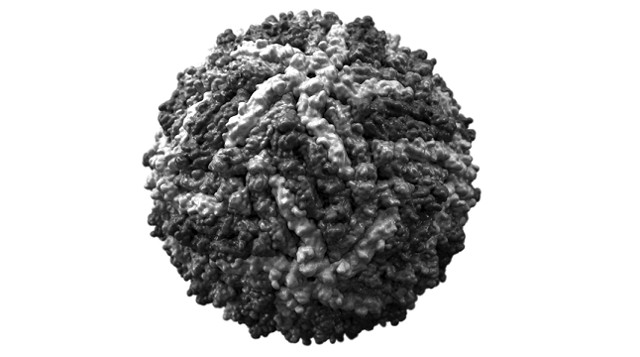 3-D reconstruction of Zika virusWIKIMEDIA, THOMAS SPLETTSTOESSERIn the last year, a diverse suite of anti-Zika vaccines has rapidly advanced through preclinical development and into human trials. A Phase 1 trial testing one approach, which relies on DNA to encode vaccine components, has already yielded encouraging results. Now, another nucleic acid, messenger RNA (mRNA) is joining the Zika-vaccine toolbox. According to a study published in Nature today (February 2), a single shot of a vaccine containing Zika virus mRNA encapsulated in a lipid nanoparticle induced protective immune responses in both mice and Rhesus macaques.

“It’s a novel vaccine platform. It has not been explored in great detail in humans yet, but it will have more clinical experience going forward,” said Dan Barouch, who directs the Center for Virology and Vaccine Research at Harvard Medical School and was not involved in the present study.

Weissman added that mammalian cells internalize RNA more efficiently than they do DNA. These advantages enabled his group to use 20 times less genetic material to generate levels of Zika virus–neutralizing antibodies in Rhesus macaques that were comparable to those generated by DNA-based vaccines. “We were surprised that we could use such a small amount and that it worked so well in macaques,” he said.

The team exposed five macaques to Zika virus five weeks after immunization, finding that four were completely protected from detectable virus in the blood. One animal that produced low levels of antibodies had transient viremia three days after the challenge. Barouch said it was encouraging that, as with other Zika vaccines, there was a correlation between antibody levels and protection from infection.

Weissman’s group had to overcome two major hurdles that have long plagued the RNA vaccine field. First, outside the cellular environment, the body is full of RNA-degrading enzymes. “That’s been one of the problems with RNA vaccines in the past,” said Kayvon Modjarrad, an infectious disease specialist at the Walter Reed Army Institute of Research in Silver Spring, Maryland, who was not involved in the work.

To avoid those enzymes, the team used commercially-available lipid nanoparticles that can carry RNA and then deliver it into cells by fusing with cell membranes. That, Weissman said, turned out to be the easy part. “The trick was to figure out which one works best for mRNA.”

Once inside cells, foreign RNA activates internal innate immune receptors, and can end up being destroyed before it has a chance to be translated into protein. To overcome this issue, Weissman’s team constructed the Zika mRNA using a modified nucleoside, called 1- methylpseudouridine, in place of uridines. The group previously demonstrated that this swap enables the molecule to evade immune recognition inside of cells.

Philip Santangelo, a virologist at Georgia Tech in Atlanta, said this approach is somewhat counterintuitive, as RNA vaccines were originally tapped for their ability to stimulate the immune system without an added adjuvant. It’s unexpected, he said, that an mRNA vaccine could elicit strong responses without adjuvant or RNA’s native immunogenicity.

Weissman said his team is currently wrapping up studies to explain the mechanism behind this unique characteristic. The researchers are also working on modified-nucleoside mRNA vaccines for other flaviviruses, HIV, influenza, plus some bacterial and parasitic pathogens. “We found a small subset of modifications that work very well and they seem to work well for every protein that we encode in RNA,” he said.

The team is also working with the National Institute of Allergy and Infectious Diseases to move the RNA-based Zika vaccine toward clinical trials.

Moderna Therapeutics, a Cambridge, Massachusetts–based biotech company, is currently testing a similar nucleoside-modified mRNA vaccine against Zika in a Phase 1/2 trial, with support from the Biomedical Advanced Research and Development Authority within the US Department of Health and Human Services. The firm has not yet published any data on its experimental vaccine, and did not respond to The Scientist’s request for comment.

Like other Zika vaccines, Modjarrad said, the merit of any RNA-based vaccine will be determined in human studies and investigations on pregnant animal models. Meantime, Modjarrad said he finds the reported advances encouraging. “These [Zika] outbreaks have been devastating,” he said, “but they’ve also provided a lot of opportunity for partners in academia, industry, and government to come together and start applying a lot of the technologies that have been developed over the last few decades to real-world problems.”