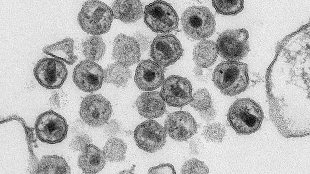 HIV virions.CDC/MAUREEN METCALFE, TOM HODGEBy investigating an African patient’s HIV infection, researchers have traced the development of an antibody that is effective at neutralizing many strains of HIV, according to a study published today (April 3) in Nature. The researchers—who identified the original HIV variant as well as the broadly neutralizing antibody, and pieced together their evolution over the course of infection—hope that a vaccine mimicking this process could encourage the development of such effective HIV-fighting antibodies.

The new research provides “really in-depth information on how a particular type of broadly neutralizing antibody emerges over the course of a natural HIV infection,” said Leonidas Stamatatos, an immunologist at Seattle Biomedical Research Institute who did not participate in the study.

Broadly neutralizing antibodies—able to block many strains of HIV from binding target cells—are notoriously rare: only about 20 percent of HIV-positive people ever generate such antibodies....

In order to find an Env that could stimulate an antibody with broadly neutralizing potential, Barton Haynes at Duke University and researchers at the Center for HIV-AIDS Vaccine Immunology (CHAVI) set up eight acute infection clinics in Malawi, South Africa, Tanzania, Uganda, and one in North Carolina, where they could watch antibody and virus develop within weeks of infection.

Haynes and his team found one patient who developed a broadly neutralizing antibody within 3 years of infection. The antibody, dubbed CH103, could block infection of target cells by 55 percent of the HIV virus particles they tested, which expressed a total of 196 different types of Env. Because the team had blood samples from the patient starting 4 weeks after infection, they could isolate the original antibody, CH103’s predecessor, as well as determine the sequence of the original Env protein that first spurred the antibody’s production.

As HIV proteins accrue mutations during an infection, antibodies evolve to increase specificity and adapt to changing targets. Finding the antibody that bound the original Env allowed researchers to identify which mutations conferred broadly neutralizing activity to CH103 and identify mutations in Env that could have contributed to CH103’s development. Haynes and his colleagues hope to recreate the evolution of CH103-like antibodies using the right combination of Env variants in a vaccine.

“The study provides important information on how one might design a rational vaccination strategy,” Dennis Burton, an immunologist at The Scripps Research Institute who did not participate in the study, wrote in an email to The Scientist. “[It’s] a significant leap.”

An effective vaccine will need to elicit more than one type of antibody to block HIV infection, so Haynes and his team are also examining the evolution of broadly neutralizing antibodies and their corresponding HIV proteins in other patients, as well.

Indeed, the bulk of the work is just beginning, said Stamatatos, who noted that the possible combinations of Env “are nearly infinite.” It’s also not clear yet whether the Env mutants should be given together, or provided sequentially in a fashion more akin to a natural infection. Haynes and his colleagues are currently beginning to test both strategies with different Env combinations in macaques and mice engineered to express human antibodies.