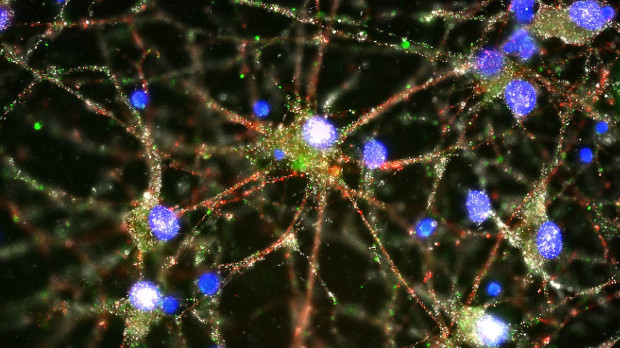 C4 (green) at synapses of human neuronsHEATHER DE RIVERACompared to the brains of healthy individuals, those of people with schizophrenia have higher expression of a gene called C4, according to a paper published in Nature today (January 27). The gene encodes an immune protein that moonlights in the brain as an eradicator of unwanted neural connections (synapses). The findings, which suggest increased synaptic pruning is a feature of the disease, are a direct extension of genome-wide association studies (GWASs) that pointed to the major histocompatibility (MHC) locus as a key region associated with schizophrenia risk.

“The MHC [locus] is the first and the strongest genetic association for schizophrenia, but many people have said this finding is not useful,” said psychiatric geneticist Patrick Sullivan of the University of North Carolina School of Medicine who was not involved in the study. “The value of [the present study is] to show...

Schizophrenia has a strong genetic component—it runs in families—yet, because of the complex nature of the condition, no specific genes or mutations have been identified. The pathological processes driving the disease remain a mystery.

Researchers have turned to GWASs in the hope of finding specific genetic variations associated with schizophrenia, but even these have not provided clear candidates.

“There are some instances where genome-wide association will literally hit one base [in the DNA],” explained Sullivan. While a 2014 schizophrenia GWAS highlighted the MHC locus on chromosome 6 as a strong risk area, the association spanned hundreds of possible genes and did not reveal specific nucleotide changes. In short, any hope of pinpointing the MHC association was going to be “really challenging,” said geneticist Steve McCarroll of Harvard who led the new study.

Nevertheless, McCarroll and colleagues zeroed in on the particular region of the MHC with the highest GWAS score—the C4 gene—and set about examining how the area’s structural architecture varied in patients and healthy people.

The C4 gene can exist in multiple copies (from one to four) on each copy of chromosome 6, and has four different forms: C4A-short, C4B-short, C4A-long, and C4B-long. The researchers first examined the “structural alleles” of the C4 locus—that is, the combinations and copy numbers of the different C4 forms—in healthy individuals. They then examined how these structural alleles related to expression of both C4A and C4B messenger RNAs (mRNAs) in postmortem brain tissues.

From this the researchers had a clear picture of how the architecture of the C4 locus affected expression of C4A and C4B. Next, they compared DNA from roughly 30,000 schizophrenia patients with that from 35,000 healthy controls, and a correlation emerged: the alleles most strongly associated with schizophrenia were also those that were associated with the highest C4A expression. Measuring C4A mRNA levels in the brains of 35 schizophrenia patients and 70 controls then revealed that, on average, C4A levels in the patients’ brains were 1.4-fold higher.

C4 is an immune system “complement” factor—a small secreted protein that assists immune cells in the targeting and removal of pathogens. The discovery of C4’s association to schizophrenia, said McCarroll, “would have seemed random and puzzling if it wasn’t for work . . . showing that other complement components regulate brain wiring.” Indeed, complement protein C3 locates at synapses that are going to be eliminated in the brain, explained McCarroll, “and C4 was known to interact with C3 . . . so we thought well, actually, this might make sense.”

McCarroll’s team went on to perform studies in mice that revealed C4 is necessary for C3 to be deposited at synapses. They also showed that the more copies of the C4 gene present in a mouse, the more the animal’s neurons were pruned.

Synaptic pruning is a normal part of development and is thought to reflect the process of learning, where the brain strengthens some connections and eradicates others. Interestingly, the brains of deceased schizophrenia patients exhibit reduced neuron density. The new results, therefore, “make a lot of sense,” said Cardiff University’s Andrew Pocklington who did not participate in the work. They also make sense “in terms of the time period when synaptic pruning is occurring, which sort of overlaps with the period of onset for schizophrenia: around adolescence and early adulthood,” he added.

“[C4] has not been on anybody’s radar for having anything to do with schizophrenia, and now it is and there’s a whole bunch of really neat stuff that could happen,” said Sullivan. For one, he suggested, “this molecule could be something that is amenable to therapeutics.”