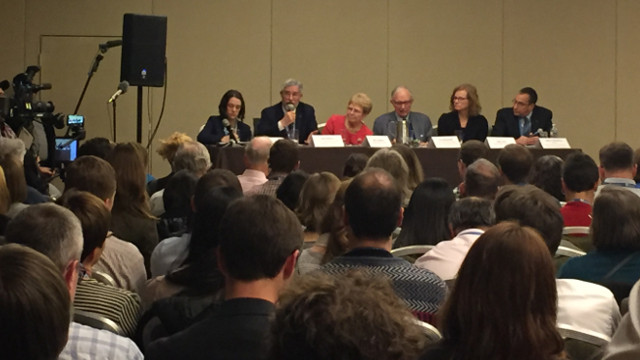 UCS panel at the AAAS annual meeting in Boston (left to right: Gretchen Goldman, John Holdren, Jane Lubchenco, Lewis Branscomb, Amy Luers, Andrew Rosenberg)BEN ANDREW HENRYFifteen minutes before a panel discussion entitled “Defending Science and Scientific Integrity in the Age of Trump,” listeners had already filled the rows of seats; newcomers stood shoulder to shoulder against the back wall or sat cross-legged in the walkways. The discussion, held Saturday (February 18) and organized by the Union of Concerned Scientists (UCS), was one of the more overtly political events during last week’s American Association for the Advancement of Science (AAAS) 2017 Annual Meeting in Boston, the theme of which was “Serving Society Through Science Policy.”

During the UCS panel on Saturday, the mood of the crowd—which erupted occasionally into cheers—reflected a political energy that enlivened the conference, coming on the heels of a tumultuous first month for the administration...

The panel began by enumerating the threats that scientists and science advocates believe could be coming their way during the next four to eight years.

John Holdren, chief science advisor to former President Barack Obama and former director of the White House Office of Science and Technology Policy, said that President Trump’s interest in expensive projects, combined with his promises to lower taxes would likely require slashing research funding in order to balance the books.

“When discretionary spending is threatened, R&D tends to be the first to go,” Holdren said. “Many members of Congress don’t understand that basic research is the seed from which future advances will come” and, as a result, “basic research at the NSF [National Science Foundation] has been under fire for a long time.”

Another concern was that a federal government perceived to be hostile to scientists would struggle to recruit the best and brightest researchers for influential government posts. Panelist Jane Lubchenco, a researcher at Oregon State University and a former National Oceanic and Atmospheric Administration (NOAA) official, warned that a government brain drain could jeopardize everything from the accuracy of weather forecasts to the pace of medical advancements. “I fear that neither policymakers nor citizens will have access to the best available science, because federal scientists will be afraid or unable to do their best work and share it,” Lubchenco said.

An ongoing argument among scientists in the wake of the presidential election has been whether it is appropriate for scientists to take up political advocacy. Some have expressed concerned that outspoken scientists will erode public trust in the fairness of science.

But panelist Gretchen Goldman, research director at the UCS Center for Science and Democracy, said the time for fretting over optics has passed. “This is a different sport,” Goldman said, arguing that scientists can no longer be confident their research will be incorporated into policy decisions under the new administration, and therefore more forceful advocacy is in order. “We can’t afford to dismantle that process.”

“We’ve seen so far that President Trump isn’t going to respect science or respect scientists,” she added, citing the US Department of Agriculture’s “gag order” fiasco and the Environmental Protection Agency (EPA)’s temporary temporary freeze on grants and contracts.

To advocate or not?

Earlier in the day, Jack Kaye, associate director for research at NASA’s Earth Science Division, offered a more reserved view. “We’re not trying to favor one course of action over another,” Kaye told The Scientist. “We’ll tell you what the Earth is doing and, with modeling, we’ll tell you what we expect the Earth to do in the future if we follow a certain course of action.” But when it comes to the final judgment call as to which policies best serve the public, he said, “society has to make that choice through a political process.”

Remaining outside the political fray, Kaye said, ensures scientists can stand by the objectivity of their research. He pointed to past NASA work for the Intergovernmental Panel on Climate Change, which helped determine the effects of fossil fuel emissions on global temperatures. “If there had been a sense out there that there’s [a position on climate change] that we favor, people may wonder about our objectivity.”

On Sunday (February 19), some AAAS conference-goers streamed out of the Hynes Convention Center during lunchtime to gather in Copley Square—around half a mile away—for the “Stand Up for Science” rally, where speakers exhorted the audience to oppose policies that run contrary to scientific evidence. To the concern that such an event might undermine the objectivity of science, several rally attendees responded with a common refrain: science has already been politicized.

See “Sights (and Signs) of #StandUpForScience”

Moreover, rally attendees said, the stakes are too high to risk the body of scientific evidence being bulldozed into the political landscape, especially on issues of healthcare and the environment.

“We need the EPA to protect the environment,” said Herman Winick of Stanford University, who was in town for the AAAS annual meeting. With the confirmation of Oklahoma Attorney General Scott Pruitt to head the agency, Winick added, “the EPA is essentially gutted.”

The mood inside the room during Saturday’s UCS panel discussion suggested conference attendees resoundingly agreed with the feeling of alarm and sense of urgency on display at Saturday’s rally.

“Please don’t make science partisan,” Lubchenco pleaded during the panel discussion. “It isn’t, it shouldn’t be, and don’t buy into that framing.”

“The public is going to suffer if the politicization of science is normalized,” said Goldman. “We cannot allow that to happen. If science is not able to inform policy decisions, we all lose.”

Scientists and science supporters should focus on communication, said Holdren. “It’s not just enough to say ‘Trust me.’ We need to do a better job, in multiple ways, showing why [research] is relevant,” he said. “Get better at telling stories about how and why science matters and how science works, and tell those stories to every audience you can find.”

“Opinion: Should Scientists Engage in Activism?” The Scientist, February 7, 2017