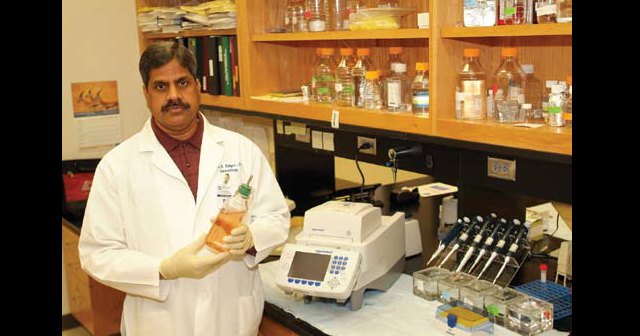 Santosh KatiyarVA RESEARCH CURRENTSA professor who received about $5 million in grants from the National Institutes of Health left his posts at the University of Alabama, Birmingham (UAB), and Birmingham VA Medical Center last year after an investigation found evidence of image manipulation in 20 of his papers, Retraction Watch has learned.

Since March 30, five articles by Santosh Katiyar that explore alternative approaches to treating skin cancer in animal models have been retracted as a result of the institutions’ probe.

The university and medical center requested a total of 20 papers be retracted, according to UAB research integrity officer Pam Bounelis. “Certain published images within those papers were not substantiated by available data, or the scientific conclusions of the publication were not supported,” Bounelis tells Retraction Watch. “Dr. Katiyar’s employment at UAB was ended on May 1, 2017.”

In an email, Bounelis says a journal...

Four of the recently retracted papers were published by Carcinogenesis, joining another retraction of Katiyar’s work in that journal for “an error in presentation of data” from 2012. The fifth was published in Photochemistry and Photobiology. Together, the five recently removed papers were cited just shy of 500 times, according to Clarivate Analytics’s Web of Science.

Jean Cadet, editor of Photochemistry and Photobiology, tells Retraction Watch that Katiyar’s former institutions contacted the journal in August 2017 with the conclusions of their investigations.

Vijayalakshmi Nandakumar, who is a coauthor of one of the Carcinogenesis papers and now a postdoc at the ‎Mayo Clinic in Rochester, Minnesota, says he “fully support[s] the retraction.”

Katiyar’s current whereabouts are unknown. In a 2006 profile in VA Research Currents about his work on green tea and skin cancer, Katiyar linked his choice of research subjects to personal experience. “I lost my mother to breast cancer,” he said. “I had done my PhD in nutrition, and I realized that my parents had devoted a lot of time and energy to my education. Yet, I could not help my mother. So I resolved to do something to help all the other mothers who are still here. I decided I would work on cancer—how it can be prevented, particularly by dietary supplements and nutrients.”