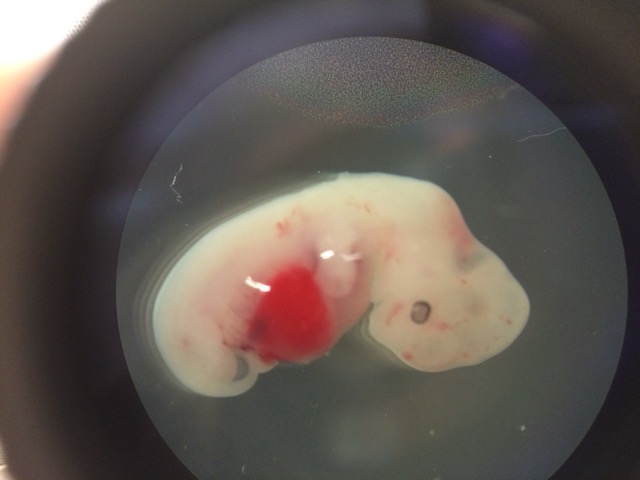 Researchers may one day overcome the problem of organ shortages for transplantation by growing spare human organs in other animals. A group led by scientists at the Salk Institute for Biological Studies has taken the first big step toward making this a reality: today (January 26) in Cell, they report having grown the first human-pig chimeric embryos.

The team, led by Juan Carlos Izpisua Belmonte, began by creating rat-mouse chimeras—a feat first accomplished in 2010, when scientists in Japan successfully produced a mouse with a pancreas developed from rat pluripotent stem cells. For the present study, Izpisua Belmonte’s group took the experiment one step further, using CRISPR-Cas9 to delete the genes in mice that coded not only for the pancreas, but other organs, such as the heart and eyes, as well. The researchers then injected rat stem cells,...

The group tried making rat-pig chimeras, but this didn’t work—the species were too different. The researchers then moved on to combine human stem cells with cow and pig embryos (chosen because of the relatively similar organ size among the species). Although their attempts to create a human-cow chimeric embryo were successful, the researchers decided to use pigs in follow-up experiments because the porcine animals were easier and cheaper to use than their bovine counterparts.

“The fact that they’ve compared rat into pig and human into pig provides a very interesting comparative analysis that other studies have not done,” said Val Wilson of the MRC Centre for Regenerative Medicine at the University of Edinburgh, U.K., who was not involved in the study.

After implanting the resulting embryos back into pigs and letting them develop for three to four weeks, the researchers found that intermediate stem cells, which are slightly more developed than naive stem cells, led to better integration.

But even with the intermediate cells, the number of human cells that were ultimately incorporated into the pig embryo was not very high, and many of the chimeric embryos were underdeveloped. According to the authors, there are several reasons why the human-pig experiments did not work as well as the mouse-rat ones. For one, mice and rats are much more related to one another than are pigs and humans, and the rodents have much more similar gestation periods (mice and rats differ by a few days, while pigs and humans are off by more than five months).

“One of the reasons might be the timing,” Wu told The Scientist. “You can imagine if you’re driving your car and enter into a highway [that] is filled with pig embryonic cells, which are going three times faster than you . . . you have to adjust your speed and timing perfectly so you don’t cause any accidents.”

The researchers did, however, see some of the human stem cells turn into the muscle cells and precursors of some organs, including the pancreas and liver.

“We’ve all been expecting something like this something for a while. I’m not surprised that the human cells don’t do particularly well in the pig embryos,” said Stephen Strom, a professor of pathology at the Karolinska Institute in Sweden who was not involved in the work. “The interspecies differences . . . are not insignificant hurdles to overcome to try and develop this technology further to make a whole human organ.”

The next step, according to Wu, will be to develop strategies to improve the human cell contributions to the pig embryo before trying to combine it with CRISPR-Cas9 technology. “We would like to reach about 0.1 to 1 percent of human cell contribution,” he said. “Right now we only observe very few human cells, [around] one cell in 100,000 pig cells.”

The ultimate goal of producing organs for transplantation is still in the distant future. There was, however, another important step made this week. In a study published yesterday (January 25) in Nature, one of the authors’ collaborators, Hiromitsu Nakauchi of the University of Tokyo, and colleagues reported having successfully transplanted a mouse pancreas generated in a rat back into a mouse. That organ remained functional for more than a year. “The success of the study is a welcome sign that the strategy can actually work,” Wu wrote in an email. “We are very happy to see those results.”

Meantime, Izpisua Belmonte pointed out another potential application for chimeric embryos: platforms for the study of human development and disease, as well as evaluation of potential therapeutics.

“It’s an interesting question, whether you could build an organ—even if it’s not for transplantation but just for study,” said Wilson. “It gets into the realms of science fiction, but it’s not inconceivable that this paper paves the way for something like that.”

For any application, experts have raised ethical concerns related to human-animal chimeras in recent years. Chief among them is the potential for chimeric organisms to grow human cells in the brain or reproductive system. “I agree that there is this possibility, but we have ways in the lab to prevent this from happening,” said Izpisua Belmonte. Such techniques include terminating the experiment before the chimeric embryo is fully developed or born, and genetically and epigenetically directing the stem cells away from developing in those organs.

“I do think it’s going to be possible to manipulate cells and generate the right match of chimeras to get human cells to incorporate [better],” said Janet Rossant, a developmental and stem cell biologist at the Hospital for Sick Children in Toronto, who was not involved in the study but has previously collaborated with the authors. “It will then be necessary to carefully assess . . . the extent to which particular tissues—most obviously, the brain and reproductive system—are colonized by the host cells and make sure that is well understood and controlled.”