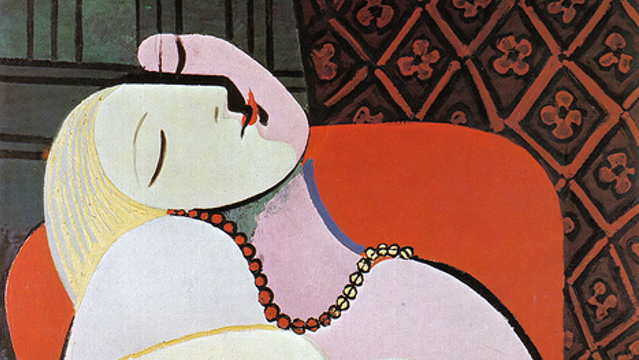 “The Dream,” Pablo Picasso, 1932FLICKR, NICHODESIGNNeuroscientists have long associated rapid eye movement (REM) sleep—the sleep stage that occurs before waking—with dreaming, and non-REM sleep with dreamlessness. These generalizations are not fully accurate, however; study participants often report having dreamt during non-REM sleep and, occasionally, the absence of dreams during REM sleep. In a study published today (April 10) in Nature Neuroscience, researchers at the University of Wisconsin–Madison and their colleagues have reported changes in the brainwave activity of one area of the brain, which they call the “posterior hot zone,” which are correlated with dreaming during both REM and non-REM sleep.

“This study looks at whether you can detect the occurrence of dreaming by analysis of high-density EEG recordings and even whether you can tell something about the categories of dream content, and it argues that they can do both of those,” Robert Stickgold, director of...

Researchers are keen to understand dreaming in part because they believe it may help them understand consciousness. It’s an old scientific idea: to study the areas involved in a given process, find a model in which that process is disrupted. During sleep, we are sometimes conscious—such as during dreams—and at other times, not, making it an ideal model system. By identifying brain activity specific to dreams, researchers hope to also identify activity specific to consciousness.

To identify more-precise neural correlates of dreaming, researchers at the University of Wisconsin–Madison’s sleep lab monitored sleeping study participant using EEGs, woke the participants at pseudorandom intervals, and then asked whether the sleepers had dreamt. The researchers then analyzed sleep stage, brainwave frequencies, and self-reported dream content.

They found that, when people dreamt (specifically, during the 20 seconds before they were woken and reported having dreamed), they exhibited decreases in low-frequency brain activity and increases in high-frequency brain activity in their posterior hot zones, relative to the activity observed when the same participants were not dreaming. And this result held true for both REM and non-REM sleep, they reported.

Based on these observations, the researchers created an algorithm to predict whether people were dreaming during non-REM sleep. The resulting predictions were accurate about 90 percent of the time, they wrote.

When people report no dreams, it’s impossible to know if they dreamt and then forgot or didn’t dream at all, Stickgold noted.

Igor Timofeev, who studies sleep and epilepsy at Laval University in Quebec and was not involved in the work, said he wished the authors had provided more absolute data about the high- and low-frequency brainwaves they recorded. “The measured values should be reported more explicitly . . . not only extent of increase or decrease but how much was there,” he told The Scientist.

The present study “demonstrates that consciousness is not supported by a broad frontoparietal network as previously believed, but rather by a restricted posterior region,” coauthor Lampros Perogamvros of the University of Wisconsin and the University of Geneva told The Scientist in an email.

Stickgold said he thinks that this claim goes too far. To his mind, the data indicate that this posterior hot zone is “involved in the process” of dreaming and dream consciousness. “It’s sort of like, you know, if you ask how does a person sign their name? And you say, well, it all has to do with their thumb and index finger . . . you sort of ignore the fact that the brain is involved.”