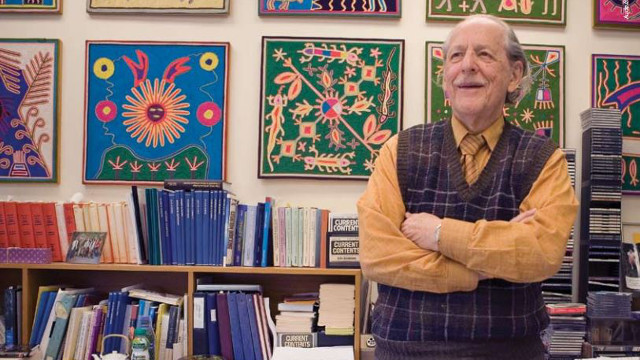 JASON VARNEY PHOTOGRAPHYEugene Garfield, who launched the field of citation analysis, died yesterday (February 26) in Pennsylvania. He was 91.

“He was an amazing character whose influence on information science, writ large, can’t be underestimated,” H. Carton Rogers III, vice provost and director of libraries at the University of Pennsylvania, where Garfield served as a member of the Libraries’ Board of Overseers, said in a statement emailed to The Scientist. “He will be greatly missed.”

Garfield founded the Institute for Scientific Information (ISI) in 1955. In addition to the ISI’s Science Citation Index, a system used to chart connections between pieces of scientific literature that later became accessible electronically via the Web of Science, Garfield launched Current Contents, an early effort that sought to compile important information on the scientific literature. He founded The Scientist in 1986, as a news magazine for researchers.

“He was a businessman...

“Before [ISI’s] Web of Science, scientists and researchers had very inefficient methods for finding and tracing other scientific documents. The citation database was not just an intellectual achievement, but also an engineering achievement,” said C. Sean Burns, an assistant professor of information science at the University of Kentucky whose PhD research was supported in part by a Beta Phi Mu/Eugene Garfield Doctoral Dissertation Fellowship. “His work enabled information retrieval to scale up. . . . This created, basically, the entire information science field as we know it today.”

Born Eugene Garfinkle in New York City in 1925, Garfield earned a PhD in structural linguistics from the University of Pennsylvania in 1961. He went on to devise the journal impact factor, a statistical framework for quantifying the reach of a particular journal in the scientific community based on citations of its publications.

Garfield himself was wary of potential misuse of journal impact factors, which Pendlebury said were initially used internally at ISI to identify the best journals to index. Garfield spoke out against the use of the impact factor as a shorthand way to rank publications, researchers, or institutions—a practice simultaneously decried and used by many. “He preached against that forever,” Pendlebury said.

In 1988, JPT Publishing purchased the ISI for $24 million. In 1982, the Thomson Corporation acquired the ISI and its citation index for $210 million. The division is now owned by Clarivate Analytics.

“Regardless of what you think about the impact factor, his contribution to helping scientists in academia think about metrics . . . that field basically wouldn’t exist without him,” said Ivan Oransky, global editorial director of MedPage Today and cofounder of Retraction Watch, who was an editor at The Scientist from 2002 to 2008.

Garfield’s contributions to the field of data analytics and scientometrics were matched by his humanity. “No matter how important he became, he always had time for everybody,” Meher Garfield, Eugene Garfield’s wife of more than a decade, told The Scientist. “He always thought of his employees as his extended family.”

Garfield saw The Scientist as a trade publication for working scientists. “He had this idea that science really needed a readable, engaging, often argumentative publication that didn’t also publish original research and could take a step back and look at policy,” said Oransky. “I used to remember him coming to editorial meetings when I was [at The Scientist]. You needed to have your facts straight and know what you were talking about when Dr. Garfield was in the room. He made sure you learned something in his critiques.”

“He was wonderfully clever, perceptive, and generous as an employer and he was great company,” said Richard Gallagher, president and editor in chief at Annual Reviews and editor and publisher of The Scientist from 2002 to 2010.

“Dr. Garfield was a titan around The Scientist office,” said Alison McCook, an editor at Retraction Watch who was an editor at The Scientist from 2005 to 2010. “We all deeply respected him, and knew that none of us would have been there without him.”

“Everything he did, he was ahead of everybody in so many ways,” said Vitek Tracz, the publisher of Faculty of 1000 and a former co-owner of The Scientist. “He was a genius of a very special type. Not only because he had this incredible imagination and brain, but he had incredible tenacity and courage.”

“There is still an important place for a publication that addresses issues such as tenure, science policy, ethics, and funding while covering key research findings and scientists who may escape the notice of traditional scientific journals,” Garfield wrote in an editorial for The Scientist’s 25th anniversary issue.

“Eugene Garfield established The Scientist as a ‘labor of love,’” said The Scientist’s Editor in Chief Mary Beth Aberlin. “More than 30 years later, it is an honor to carry on his legacy.”

Garfield is survived by his wife, Meher, three sons, a daughter, a step-daughter, two granddaughters, and two great-grandchildren.

“He never lost touch with his humble beginnings. He never became arrogant with his success,” Meher said. “I do miss him a lot.”

“A Look Back: Introducing a New Publication For the Science Professional,” The Scientist, October 28, 1996