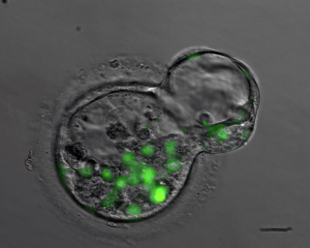 Blastocyst derived after somatic cell nuclear transfer. The green fluorescence originates from the somatic cell genome and marks nuclei.NYSCF, DIETER EGLIScientists at the New York Stem Cell Foundation (NYSCF) Research Institute, along with their international colleagues, have produced human embryonic stem cells (hESCs) by transferring the nuclei of skin cells from a 32-year-old type 1 diabetic woman into human eggs whose own nuclei had been removed, according to a study published today (April 28) in Nature. The researchers induced the hESCs to differentiate into insulin-secreting cells. They hope to eventually replace cells that type 1 diabetes patients lack with patient-specific insulin-secreting cells.

The publication comes hot on the heels of a study published earlier this month (April 17) in Cell Stem Cell that also showed the technique, called somatic cell nuclear transfer (SCNT), could be used on adult cells.

“This is the first report describing diploid patient-specific...

“This is an important demonstration that SCNT works and can be used to model and perhaps one day treat disease,” George Daley, a stem cell biologist at the Harvard Stem Cell Institute, Children’s Hospital Boston, and the Dana-Farber Cancer Institute, wrote in an e-mail to The Scientist. Daley was not involved in the research.

SCNT is a cellular-reprogramming alternative, and its products could have advantages over induced pluripotent stem cells (iPSCs). Producing iPSCs does not require donated eggs, making it potentially easier than SCNT. But iPSCs have shown some epigenetic abnormalities and genetic instability. Researchers have yet to determine whether SCNT-reprogrammed cells may have therapeutic advantages over iPSCs.

The technique was first used to create embryonic stem cell lines from animals, and most famously, to clone Dolly the sheep, but SCNT had faltered in humans. In 2011, Egli and colleagues reported using SCNT to produce hESCs, but they transferred somatic nuclei into the eggs without removing the recipient cells’ nuclei. The resulting stem cells were triploid, making them unsuitable for therapeutic use.

In May 2013, a team led by Shoukhrat Mitalipov, a stem cell biologist at Oregon Health & Science University, finally published a description in Cell of diploid SCNT-derived hESCs. The work was hailed as a breakthrough in stem cell biology, but soon online commenters began to question the paper because of mislabeled and duplicated images.

Mitalipov and colleagues corrected the errors and stood by their results. The SCNT pioneer now finds it promising that other stem cell researchers are moving forward with the approach. “It’s encouraging that now there is a second group that independently verified our technique,” Mitalipov said.

The new paper, along with the other recently published study, showed that it is possible to use SCNT to derive hESCs from adult cells, as opposed to the fetal cells Mitalipov and colleagues used. In addition to deriving stem cell lines from cells from the adult woman, Egli and his colleagues derived pluripotent cells from a newborn boy’s foreskin.

“In the reprogramming field, and certainly with using nuclear transfer, the experience has generally been that it’s harder to get it to work with adult cells than embryonic or newborn cells,” said Robin Lovell-Badge, a stem cell biologist at MRC National Institute for Medical Research in London, who was not involved in the research.

One key to producing hESCs using SCNT is to trick an egg into behaving as though it has been fertilized, even though in fact its own chromosomes have been swapped out for the genetic material of adult cells. Researchers also must stimulate the eggs to reprogram the transplanted adult DNA to a more embryonic state. Egli and his colleagues’ technique for achieving this bore many similarities to previous SCNT work. But the researchers added histone deacetylase inhibitors to help with chromatin remodeling and made other tweaks to the protocol, including altering timing and concentrations of reagents.

Ultimately, the team was able to grow SCNT-derived oocytes into blastocysts and, from those, derive pluripotent stem cell lines from the embryos that were able to differentiate into neural cells, cartilage, insulin-secreting cells, and more.

“The results presented in [the] current Nature paper are well in accordance with what we reported earlier,” Young Gie Chung, a stem cell biologist at CHA University in Korea and at CHA Health Systems in Los Angeles, California, and a coauthor of the Cell Stem Cell paper, told The Scientist in an e-mail.

Both Mitalipov’s group and the NYSCF team are now comparing iPSCs and SCNT-derived cells to better understand how they differ. “It remains unclear whether stem cells produced by SCNT have any advantages over iPS cells,” said Daley, adding that “the differences would have to be quite significant to justify the inconvenience, discomfort, and risk to women associated with obtaining human eggs for SCNT.”

The NYSCF team hopes to eventually transplant insulin-producing cells created using patients’ own DNA into people with type 1 diabetes. But first, they will need to carry out extensive preclinical testing. The researchers are also working to determine how to prevent the immune systems of diabetic patients from attacking the insulin-producing stem cells.

Still, Egli said that his team’s work, combined with progress made by others, brings the community “a significant step closer to the development of cell replacement therapies.”

“After so many years of people trying and failing, to finally have three papers come along at once almost is really good,” said Lovell-Badge.