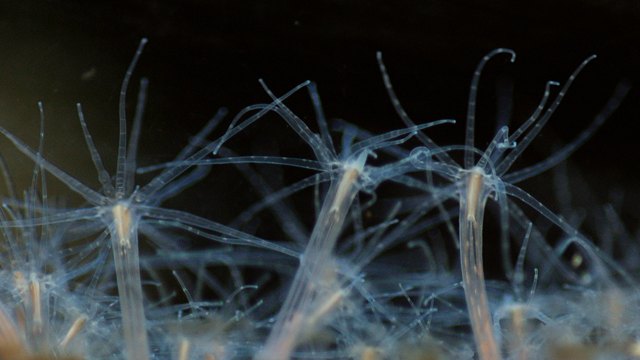 Polyps of the starlet sea anemone Nematostella vectensis. Their single body opening (mouth) is surrounded by extended tentacles. The cells producing digestive enzymes and insulin-like peptides are part of the folds running internally along animal.PATRICK STEINMETZHumans and most other animals that belong to the phylum Bilateria have embryos that form three layers of cells called germ layers—ectoderm outside, endoderm inside, and mesoderm in between—that give rise to the organism’s organization. Embryos from the phlyum Cnidaria, which includes jellyfish and sea anemones, only have two layers of cells, which scientists have correspondingly classified into two germ layers­—ectoderm on the outside and on the inside, mesendoderm, which produces cell types that in bilaterians come from either the endoderm or the mesoderm.

A study published today (September 11) in Nature Ecology & Evolution suggests that instead of two distinct germ layers, cnidarians may indeed have three. The authors show that...

Nematostella embryos’ two cell layers arise during gastrulation by the movement of a group of cells into the interior of the animal to form a pouch with one open end. The two layers created by this invagination were historically described as endoderm and ectoderm. More recent work suggested that what scientists considered endoderm was likely a combination of tissues fated to become cell types that, in bilaterians, are derived from mesoderm and endoderm, which led to the use of the term ‘mesendoderm.’ 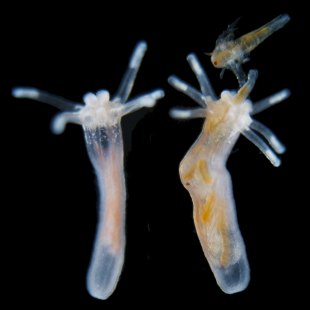 Young polyps of the starlet sea anemone Nematostella vectensis which are fed (right) or unfed (left) with brine shrimps. A single brine shrimp is seen above the mouth of the right polyp.PATRICK STEINMETZ“The paper shows convincingly that the cells that move into the interior of the embryo at an early stage, and that used to be considered ‘endoderm,’ show all of the hallmarks of the mesoderm of other animals,” University of California, Los Angeles, developmental biologist Volker Hartenstein, who did not participate in the study, writes in an email to The Scientist. “Cells that move inside later . . . express all the properties of endoderm.”

Technau and colleagues first transplanted tissue from different areas of fluorescently labeled Nematostella embryos onto unlabeled embryos. By tracing the fate of the glowing tissue, they found that a patch near the embryos’ mouths, which has been traditionally described as part of the ectoderm, always developed into gut-like cells, including gland cells that secreted digestive enzymes and cells that secreted insulin-like peptides. But glowing cells donated from the embryos’ inner layer contributed to muscle cells, somatic gonads, and other cell types, which in bilaterians are derived from mesoderm. Cnidarian embryos thus seem to have topographically discrete endoderm and mesoderm tissues. 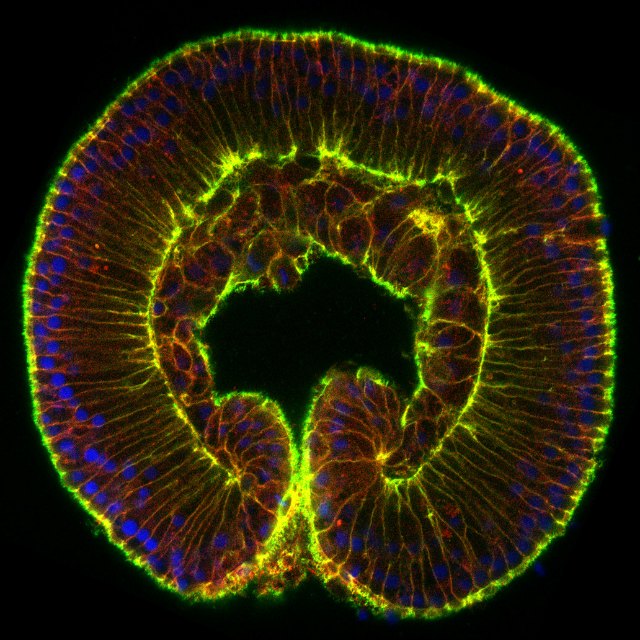 Cross-section of a Nematostella embryo just after formation of the germ layers. Green and red label the cell outlines, while blue highlights the nuclei.SABRINA KAUL-STREHLOW

The team also showed that many of the Nematostella cells in the layer previously defined as mesendoderm express orthologues of genes found in bilaterian mesoderm, such as foxC and nkx3. The group of cells near the embryos’ mouths, which eventually formed the gut-like cells, expressed genes known to specify endoderm in bilaterians, such as foxA. The authors found similar gene expression patterns in another cnidarian, the moon jelly (Aurelia aurita). These findings suggest that cnidarian mesendoderm may contain more distinct organization than previously believed.

“It’s a really interesting paper. What it shows is that the differentiation of endoderm and mesoderm . . . already existed before the most recent common ancestor of cnidarians and bilaterians,” says Gunter Wagner, an evolutionary biologist at Yale University who did not participate in the work. “The next question is to try to understand how the gene regulatory networks arise that define different cell type identities, like mesoderm, endoderm, and so on,” he adds.

Making semantic distinctions between groups of cells that have historically been called endoderm, mesoderm, mesendoderm, or ectoderm reveals less about evolution and development than exploring the function of molecular pathways that contribute to cell type specification or patterning, and contrasting how these pathways work in different organisms, says Mark Martindale, an evolutionary developmental biologist at the University of Florida who was not involved in the work. “If I were them, I would be asking: what is it about development that makes those gland cells form in that particular part of the gut and not in some other part of the gut?”

In the future, Technau plans to investigate these questions about the molecular underpinnings of cell type and germ layer specification using single cell transplants and single cell genomics, which he says will lead to a much more refined understanding of Nematostella. “It’s only superficially very simple,” he says. “If you look a little bit deeper you might find much more complexity.”