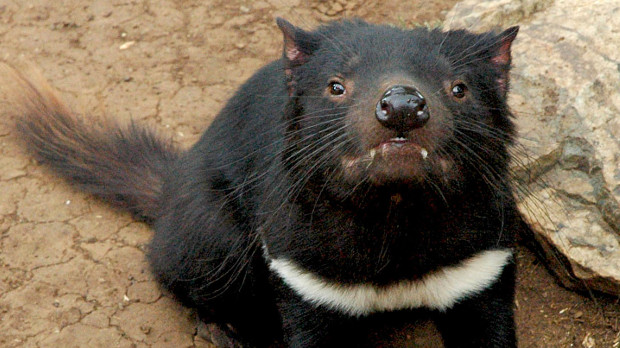 Tasmanian devilWIKICOMMONS, KERESHDevil facial tumor disease (DFTD) in Tasmanian devils (Sarcophilus harrisii) was first found in 1996. Ten years later, it was confirmed as a transmissible cancer. The disease spreads from animal to animal via living cancer cells, causing tumors on the side of the faces or inside the mouths of the carnivorous marsupials. Now, researchers have found a second such tumor, one that is genetically and histologically distinct from DFTD in five animals. The analysis of this new transmissible tumor, called DFT2, appeared this week (December 28) in PNAS.

DFTD, which researchers are now calling DFT1, was first noticed by a wildlife photographer and traced by researchers to a female animal. Biting spreads the tumors, which arose from mutated neural support cells called Schwann cells. The tumors metastasize readily to the lymph nodes, lungs, and kidneys in the animals. Transmissible cancers are very rare, although not...

“The devils and their tumors have been closely monitored since discovery of DFT1 and DFT2 was detected as a result of this close monitoring,” study coauthor Ruth Pye of the University of Tasmania’s Menzies Institute for Medical Research wrote in an email to The Scientist.

“One transmissible cancer is rare,” wrote study coauthor Greg Woods of Tasmania in an email. “Two is astonishing.”

“This is an amazing and fascinating story,” Beata Ujvari, an ecologist and evolutionary biologist at Deakin University in Geelong, Australia, told The Scientist in an email. “Yet, it is less surprising to find a new structural tumor variant has emerged in this same species, knowing that the animals are inbred, how prone the animals are to neoplasia, how quickly DTFD has evolved, and that anthropogenic selection enhances the cancer evolution of these tumors.”

DFT2 tumors look anatomically similar to DFT1 malignancies, but the two have distinct histologies and are genetically different. DFT1 cells are arranged in bundles, while DFT2 cells congregate in sheet-like structures. Analyzing microsatellites throughout the tumor genomes, the researchers concluded that DFT2 tumors were as different from DFT1 tumors as they were from healthy devil cells. DFT2 tumors, Pye, Woods, and their colleagues found, showed rearrangements on three chromosomes and, unlike DFT1, had both the X and Y chromosomes present.

“These are mutations are like that of any cancer but with the twist in that these tumors have acquired this new trait, which is this funny ability to spread between individuals,” said Stephen Goff of Columbia University in New York City. Goff studies a contagious cancer that affects soft-shell clams and was not involved in the present study.

“For me, the most interesting question is: What are the genetic changes that allow for this extreme version of metastasis that allows tumor cells to colonize a new host animal and evade the immune system?” Goff added.

DFT1 cells are thought to be able to evade the host immune system because, although they have a different major histocompatibility complex (MHC) genotype from the devils, they do not express these MHC molecules on their surfaces. In mammals, MHC molecules function to identify foreign or diseased cells, including cancer. The DFT2 tumors analyzed had a different MHC genotype both from DFT1 tumors and from the animals in which the DFT2 tumors were identified.

“I’ve often wondered why the MHC genes evolved their enormous variability,” said Jennifer Marshall Graves, a geneticist at La Trobe University in Melbourne, Australia. “Maybe it helps stop cancer from spreading between animals,” Graves continued. “If you lose too much variation, as has happened for animals such as the devils, what is to stop cancers from spreading? For me, the discovery of a new DFTD suggests that the low MHC variability of these animals makes them particularly prone to rare, transmissible cancers.”

The researchers are now focusing on fine-tuned genetic and transcriptomic analyses of DFT2 and working on a vaccine against DFT1, which has wiped out nearly 90 percent of the species. “DFT2 is similar to DFT1 and immune responses against DFT1 should also react against DFT2,” wrote Woods.

For Ujvari, whether one vaccine could be effective against both tumor types is an open question. And it remains to be seen whether the emergence of DFT2 was facilitated by the evolution of resistance to DFT1 in animals living in areas where both tumor types were found, as the researchers have proposed.