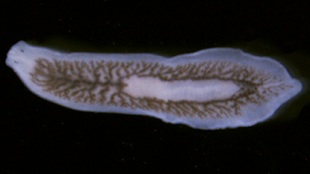 Procotyla fluviatilisJAMES SIKESTweaking a signaling pathway in flatworms that have partially lost the ability to regrow their heads can reactivate their regeneration abilities, according to a trio of papers published today (July 24) in Nature. The papers, authored by three independent teams, show that manipulation of the Wnt/β-catenin signaling pathway—known for its role in body patterning in diverse animals—is key to triggering regeneration.

“I think the finding . . . is very important to our understanding of regeneration in particular and of the evolution of this phenomenon in general,” Alejandro Sánchez Alvarado of the Howard Hughes Medical Institute and the Stowers Institute for Medical Research, who was not involved in the research, told The Scientist in an email.

The two most extensively studied species of flatworm, Dugesia japonica and Schmidtea mediterranea, are highly regenerative, regrowing heads and tails from stem cells no matter where they are cut. “You...

But other flatworms seemed only partially regenerative, able to regrow a head if cut near the front of their bodies but unable to regenerate if cut nearer the tail. Sikes tracked down one partially regenerative flatworm species, Procotyla fluviatilis, in a stream in Illinois, while developmental biologist Jochen Rink of the Max Planck Institute of Molecular Cell Biology and Genetics in Germany selected Dendrocoelum lacteum, spotted in an English pond. And a Japanese team chose to study a third regeneration-deficient worm, the Japanese species Phagocata kawakatsui.  When the teams began their research, they were unaware of each other’s projects.

Sikes and his coauthor compared gene expression in wounds inflicted upon regenerative and non-regenerative regions of the partially regenerative flatworms’ bodies. They found that expression of Wnt signaling genes was elevated in the wounds where regeneration failed.

Wnt/β-catenin signaling has previously been shown to help determine whether highly regenerative flatworms regrow a head or a tail, depending on the orientation of their wounds. To see whether the non-regenerative worms’ problems could be attributed to altered Wnt/β-catenin signaling, the teams knocked down β-catenin using RNA interference (RNAi) in the non-regenerative tissues and found that worms with lowered β-catenin levels in their posteriors were able to regenerate, even when cut in previously non-regenerative areas. “I was shocked when I saw a head popping out of these little guys,” said Sikes. “It’s shocking that a single gene can rescue a regeneration program that was lost million years ago.” Furthermore, the regenerated worms appeared to have normal physiology and behaviors.

The Japanese team also knocked down β-catenin expression in P. kawakatsui using RNAi and saw growth of a “head-like structure,” according to coauthor Yoshihiko Umesono of the RIKEN Center for Developmental Biology and Kyoto University. He said the regenerated flatworms behaved as though they had heads, attempting to move away from light. However, Rink noted that head regeneration did not appear to be fully rescued in P. kawakatsui.

Peter Reddien, a developmental biologist at the Massachusetts Institute of Technology’s Whitehead Institute, who was not involved in the studies, said that the results made sense in light of the previous findings on the role of Wnt/β-catenin signaling in regeneration. However, he said that the reactivation of regeneration was still “a striking result.” Partially non-regenerative species could have lost steps anywhere in the regeneration process, he noted. The animals could have had altered wound healing or their stem cells could have been inappropriately distributed for regeneration, for instance. The papers show that the flatworms have retained a latent regeneration ability that can easily be re-triggered. “They have the ingredients, but something is wrong with the ability to execute that type of regeneration program,” Reddien said.

Nailing down the basic mechanisms of regeneration could aid in understanding how stem cells are instructed to regenerate body parts in animals beyond flatworms, according to Christian Petersen, a developmental biologist at Northwestern University who was also not involved in the study.

Rink is now collecting more species of flatworms, hoping to compare their regenerative abilities and the molecular pathways behind them. “What’s surprising to me still is that by such a crude manipulation . . . you can reverse the species specific regeneration defect,” he said. “This is surprising in light of the complexity of building a head.”