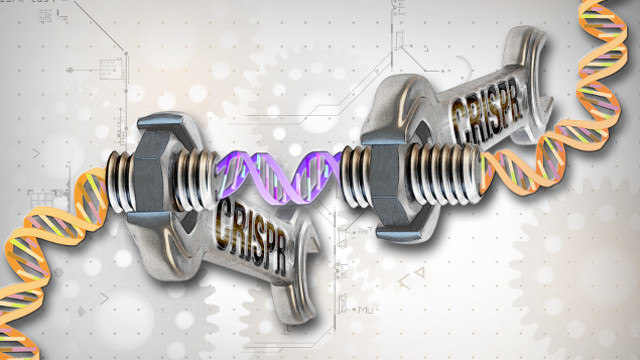 WIKIMEDIA, NHGRIBy tweaking the CRISPR-Cas9 gene-editing machinery such that it mutates its own guide RNA loci, researchers have developed a method for cells to continuously generate their own unique barcodes. The technique, developed independently by two groups at MIT and Harvard, has been utilized in mammalian cells for molecular recording—as described this summer (August 18) in Science—and for lineage tracing, according to a paper published last week (December 5) in Nature Methods.

“It is a really cool technique . . . in the sense that you get one site that can generate a very diverse editing pattern and can start encoding more and more information,” said Aaron McKenna of the University of Washington who was not involved in either study.

Neuroscientist Edward Boyden of MIT who also did not participate in the studies agreed. “This is very exciting work, since it could help label different cells in...

The use of the CRISPR-Cas9 gene-editing system to insert information about a cell into its own genome—be that information about the cell’s identity (a barcode), or the cell’s exposure to signaling molecules or other factors—is a growing area of innovation, said McKenna. In May, for example, McKenna and colleagues described a lineage-tracing technique that used CRISPR-Cas9 to cumulatively and irreversibly mutate an array of synthetic DNA elements in zebrafish cells.

But the amount of mutations that can be generated by the canonical CRISPR-Cas9 system—and thus, the amount of information that can be stored—is limited, McKenna said. This limitation stems from CRISPR-Cas9’s original function as a bacterial immune mechanism against invading viruses.

In bacteria, the Cas9 nuclease is directed against offending viruses via guide RNAs, which contain short sequence matches to the viruses. The RNAs are encoded in the bacteria’s own genome (following previous encounters with the virus), but are protected from Cas9 attack themselves because they lack specific DNA sequences—present in the viral genomes—that are necessary for Cas9 recognition. These virus-identifier sequences are called protospacer adjacent motifs (PAMs).

When using the CRISPR-Cas9 system for generating mutations in eukaryotic cells, then, the number of possible mutations is limited by the guide RNAs themselves. After a few mutations to the target elements, the guide RNAs no longer have sufficient sequence homology to be able to direct Cas9 effectively.

To increase the information storage capacity of the CRISPR-Cas9 system, two teams—one led by MIT’s Tim Lu, the other by Harvard’s George Church—came up with the same solution: include a PAM sequence in the guide RNA loci to enable self-editing.

“Every time a mutation is introduced into that locus, basically, a new guide RNA is generated that can keep targeting itself,” explained Lu.

The homing guide RNA system “generates eight to ten times more diversity in its locus than a canonical guide RNA creates in its target,” said coauthor Reza Kalhor, a researcher in Church’s lab. However, the recording capacity is not endless. “A lot of the mutations [generated by CRISPR] tend to be deletions,” he explained, so after series of mutations, the matching RNA sequence—only 20 nucleotides or so to begin with—becomes too small to function. “It basically ends up shooting itself in the foot,” said Kalhor.

“There is more work in the future, for sure, to evolve these techniques” said McKenna. Meantime, he added, these papers “demonstrate the breadth of what’s possible using CRISPR.”