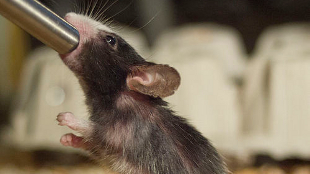 WIKIMEDIA, TIIA MONTOScientists have engineered fruit flies that can’t taste sugar, and, at first, the insects will show no preference between sugar water and plain water. But after 15 hours without food, the flies start to choose the sugar water, seemingly sensing the fact that the liquid contains life-sustaining calories even though they can’t taste anything.

“They sense calories in a way that is somehow independent of tasting the calorie itself,” said Ivan de Araujo, a neurobiologist at Yale University.

The experiment described above, published in the Proceedings of the National Academy of Sciences in 2011, is just one example of several recent studies that have found that mice, rats, and fruit flies have sensors, separate from taste buds, to detect nutrients. It’s not just a matter of feeling full, said de Araujo. That is, the animals don’t appear to be reacting to the stomach stretching, the release...

Such nutrient sensors may serve as an evolutionary failsafe, helping animals detect what’s good to eat even if the taste buds don’t quite get the message, said Tony Sclafani, who directs the Feeding Behavior and Nutrition Laboratory at Brooklyn College. For example, the sensors could work for certain starches that don’t have strong flavors, but still offer useful calories for the body, he said. “But we’re still trying to figure out the mechanisms, let alone evolutionary meaning,” he cautioned.

Recently, however, scientists have begun to uncover clues regarding that mechanism. Last November, for example, a team from Texas A&M published a paper in Cell that found a certain receptor in fruit fly brain neurons acts as a fructose sensor, both urging flies to eat when they’re hungry and to stop eating when they’re full. And last month, a team from New York University found a protein in fruit fly neurons that may work in glucose and galactose sensing, allowing flies to learn to choose real sugar over a sweetener that doesn’t provide any nutrition.

Sclafani first recognized that nutrient sensors functioned independently of taste in the early 2000s, when he decoupled what rats sensed in their mouths from what they sensed in their stomachs by implanting catheters to deliver solutions directly to the animals’ stomachs. He and his team then gave the rats infusions of either a caloric glucose solution or plain water when the animals lapped at water bottles filled with different flavors of calorie-free Kool-Aid. Whatever flavor the researchers paired with glucose infusions quickly became the rats’ favorite.

In 2008, de Araujo published similar findings in trpm5 knockout mice, which can’t taste sucrose. Despite not being able to taste the sweetness, the mice strongly preferred sucrose solutions. De Araujo found that the sucrose induced dopamine release in the mice’s brains, a neural reward scientists had previously associated with sweet flavors, but not with nutrient intake. Last year, de Araujo looked at the effect of fat intake, and found the same taste-independent dopamine release.

But while the influence of dopamine and reward pathways in the brain seems clear, researchers have not yet been able to identify the actual sensor in the intestines responsible for mediating this sixth sense for nutrition. Sclafani investigated the possibility that CD36, a candidate fat-tasting receptor that appears on the tongue as well as in the intestines, may play a role, but CD36 knockout mice still learn to prefer catheter-delivered soybean oil infusions over non-nutritive oil infusions. Other groups have examined different taste sensors in the mouth that also appear in other parts of the body, and have met with similar disappointment.

When the first papers came out that showed that fruit flies also prefer nutritive solutions independently of taste, the model organism opened the door for genomic techniques that are more difficult to perform in rats and mice. In a paper published March 31 in Nature Neuroscience, Greg Suh and his collaborators at the New York University School of Medicine performed a genome-wide screen, looking for fruit flies that failed to learn to prefer metabolizable D-glucose over non-metabolizable L-glucose, which both taste sweet. In other words, they looked for flies whose nutritive sensors were broken.

The team found one fly strain that consistently preferred sweeter solutions, no matter if the mixtures were made with D-glucose or L-glucose. The flies were missing a gene, which the researchers dubbed “cupcake,” which encodes a protein that’s active in certain brain neurons, called R4 neurons, implicating the cells as a possible nutritive sensor—possibly by directly detecting the presence of glucose in the insects’ hemolymph, the fly version of blood, Suh suggested. Alternatively, the cells could be a downstream player in a series of neurons involved in sensing hemolymph glucose, he noted.

Whether or not humans have a similar sense remains an open question. Some studies found that people learn to prefer nutritive versions of juices and sorbets over calorie-free varieties, but other studies showed no effect, according to a review published in Physiology & Behavior last June.

Regardless, it’s clear that for at least some species, there’s more to the satisfaction of eating than just flavors. “What about the other half? What about the calorie?” Suh said. “This has been overlooked for many years.”