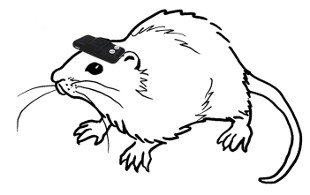 NORIMOTO AND IKEGAYACoupling a geomagnetic compass with stimulating electrodes implanted in the visual cortex allowed rats whose eyelids had been stitched shut to navigate mazes as efficiently as their sighted counterparts. The results, published today (April 2) in Current Biology, suggest that the adult mammalian brain, once thought to be fairly inflexible, can adapt to an entirely new sensory modality.

“It was very clever and a very good example of the extremes of plasticity that are available in the adult mammalian cortex,” said Eric Thomson, a researcher in the Miguel Nicolelis lab at Duke University who did not participate in the study. “It’s another verification that if you make the information available to the brain, the brain is smart enough to make use of that information in an adaptive way.”

“This is an elegant demonstration of the brain’s capacity to incorporate totally new senses,” David Eagleman,...

Understanding one’s place in his environment is key to successful navigation, and without an ability to perceive their orientation, people who are blind have a hard time getting around. Interested to see if simple directional signals could help mitigate this navigational deficit in the blind, neuroscientists Yuji Ikegaya and Hiroaki Norimoto of the University of Tokyo created a device that would stimulate the brains of rats when the animals turned their heads north or south.

The researchers mounted the device on rats whose eyelids had been sutured shut, then compared their navigational performance to that of sighted animals. Remarkably, after just a few days, the “blind” rats fitted with the neuroprosthetic device could find food in a T maze or more complex maze as well as sighted rats. Moreover, after the rats had learned the maze, they could navigate it even if the device was only turned on for a brief period before they entered, then silenced during the trial. “This result suggests that rats can normally acquire an internal map even through a non-inherent modality,” Ikegaya told The Scientist in an e-mail.

“Many neuroscientists hold on to the reasonable—but largely untested—intuition that the brain can only incorporate a new data stream if it's an extension of, or structured the same as, existing senses,” said Eagleman. “But this result beautifully illustrates that we have not yet discovered the theoretical limits of the brain’s flexibility.”

The “blind” rats fitted with the neuroprostheses are “definitely perceiving something,” agreed neuroscientist Velia Cardin of University College London who was not involved in the study. “It’s a question of the nature of that perception.” Cardin said she suspects that the signals may appear as flashes of light that the rats learn to associate with north and south. Of course, she added, “it doesn’t really matter what you perceive, if you can use it.” The next step, Cardin noted, is to see if the device can help rats navigate a more complex environment, a task that may require more than just two electrodes.

Eventually, the researchers hope that similar neuroprostheses may help people with vision impairments to sense their environments. In the nearer term, they wonder if a simple geomagnetic sensor could be attached to the canes used by the blind to provide tactile or auditory feedback that could improve navigation.

Down the line, Ikegaya speculates about the plausibility of “supersensory organs”—artificial sensors though which humans can expand their senses to perceive signals of geomagnetism, ultraviolet radiation, ultrasonic noises, pheromones, and more. “Perhaps we do not yet make full use of our brain,” he said. “The real sensory world must be much more ‘colorful’ than what you are currently experiencing.”