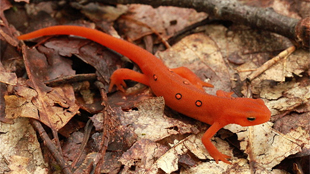 Red spotted newtWIKIMEDIA, JASON QUINNThe red spotted newt (Notophthalmus viridescens) could sit in the palm of your hand, but its genome is ten times the size of yours—up to 10 billion base pairs. This daunting amount of DNA has kept this species off the radar of any genome sequencing projects, despite plummeting costs. It has also prevented newts and salamanders from becoming regular model organisms, despite their remarkable and medically-relevant ability to regenerate severed limbs and damaged organs.

Recently, a team of German scientists circumvented the difficulties posed by the newt’s huge genome by sequencing its transcriptome instead—the set of RNA produced from its genes. Since some of an animal’s genome is never transcribed, transcriptomes can often be decoded at a fraction of the cost and effort of a full genome, and the newt results, published last month (February 20) in Genome Biology, are...

The team, co-led by Thilo Borchardt from the Max-Planck-Institute for Heart and Lung Research, sequenced more than 120,000 RNA transcripts from newt embryos and larvae, at least 14,000 of which code for proteins, and found that many proteins associated with regeneration are not found in other animals, even other amphibians, suggesting this ability may involve proteins that have only recently evolved. “It’s a very impressive demonstration of what a transcriptome can reveal,” said Borchardt.

More specifically, the study identified 800 proteins that are unique to the newt, and although their function is unclear, some of them are only detected in regenerating organs, suggesting that they are involved in the newt’s healing ability. The fact that these proteins are not also found in mammals counters the notion that regeneration is an ancestral ability that some lineages have lost or repressed. The findings also cloud the hope of unlocking such abilities in mammals with the right molecular triggers. However, studying the regenerating newts might still reveal ways of mimicking the same healing ability in humans, said Borchardt, who thinks that having the animal’s transcriptome at hand will be an invaluable asset for such research.

Transcriptomes also have another advantage over genomes—they are dynamic, and can reveal new insights about an animal’s development and behavior. “If you have the genome of a species, that’s basically an n of 1,” said Seirian Sumner from the Zoological Society of London. “Transcriptomes, however, are constantly changing, and they give us snapshots as to what happens when an organism responds to its environment.”

Sumner has been studying the transcriptome of the paper wasp Polistes canadensis, which represents an early stage in the evolution of the social insects. It lives in small colonies with queens and workers, but unlike the physically distinct castes of ants or bees, those of paper wasps differ only in their behavior.

Sumner sequenced transcriptomes from the brains of queens and workers to see how their single genome could be decoupled to drive two sets of behaviors. Her results, also published last month (February 26) in Genome Biology, showed that around 9 percent of the wasp’s 26,000 genes are expressed differently in the two castes of wasp. Many of these were new to science, as in Borchardt’s newt study, and around 75 percent of those that distinguish the workers and queens are unique to the paper wasp.

Sumner’s team also showed that around 90 percent of the caste-biased genes are more active in workers, while most are turned off in queens. This suggests that many of the changes in the early evolution of social insects took place in the workers, perhaps leading to a more complex range of behaviors. “Transcriptionally, the workers are jacks-of-all-trades. They can take advantage of any situation,” said Sumner. “The queens are very specialized, even at this early stage of evolution.”

She now wants to look at the transcriptomes of other primitively social insects to see if the same patterns hold. “It’s a fast-track route to get at the active genes underlying different behaviors, and a great approach for non-model organisms where we still don’t have full genome information,” she said.

In another example, US researchers led by Stephen Palumbi from Stanford University sequenced the transcriptome of the coral Acropora hyacinthus under different temperatures, to understand how it might fare as the oceans warm. As the water got hotter, the researchers found, around 60 genes were more active in heat-resistant corals than heat-sensitive individuals. Interestingly, these genes already showed greater activity in the resilient corals even before the water got too hot, suggesting that some corals are already front-loaded with the right proteins for dealing with environmental stress.

“The use of transcriptomes to provide preliminary views of the organization of unsequenced genomes is well established and useful,” said Thomas Gingeras, a geneticist from Cold Spring Harbor Laboratory. But, he cautioned, trasncriptome sequencing should be regarded as a first step. For example, in the wasp study, the differences between workers and queens could be due to variations in the expression of certain genes, or to how RNA transcripts are processed, translated, or moved around the cell. “Transcriptomes provide you with the beginning of hypotheses, but you need many more experiments downstream,” said Gingeras.