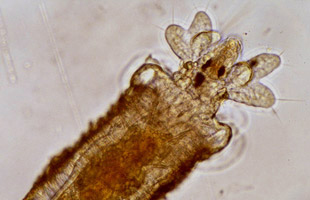 Juvenile Hydroides elegans tubeworm, post-metamorphosisCOURTESY OF BRIAN NEDVEDHydroides elegans is a tiny marine tubeworm that causes millions of dollars in increased fuel costs each year by settling on the hulls of ships and creating drag. Before the organism settles on a surface, though, it must receive an as yet unknown signal to transition from the free-swimming larval stage that precedes settling of the juvenile tubeworm.

Now, researchers have demonstrated that a set of bacterial genes necessary for H. elegans metamorphosis encodes components of structures that resemble the contractile tails of bacterial viruses or phage. These bacterial metamorphosis-associated contractile structures, or MACs, form an organized extracellular array that is required for the switch from free-swimming larva to anchored juvenile tubeworm. The work was published today (January 9) in Science.

“I have no question that this is a benchmark paper in biology,” said Margaret McFall-Ngai, a professor of...

Michael Hadfield, a professor of zoology at the University of Hawaii at Manoa, and his colleagues had previously shown that Pseudoalteromonas luteoviolacea bacteria influence the metamorphosis of H. elegans, and that specific genes expressed by—and contact with—P. luteoviolacea are essential for the switch from swimming to settling in the tubeworm, but how bacterial genes played a role in tubeworm metamorphosis was still unknown.

In collaboration with Hadfield, scientists from the California Institute of Technology identified more genes in the vicinity of those already shown to be required for H. elegans metamorphosis, and predicted that the suite of genes encoded components of contractile phage tail-like structures (MACs). When each of the genes was deleted, the bacteria grew normally, but did not induce metamorphosis in H. elegans larvae. Electron micrographs of P. luteoviolacea showed that the genes did encode MACs, and more imaging revealed that the MACs assembled intracellularly, and then during bacterial lysis developed into a well-organized extracellular array of nearly one hundred contractile tubes likely joined by a hexagonal lattice of tail fibers and an as-yet-unknown lattice protein.

“We were all completely shocked when it turned out to be this amazing array of interconnected phage tail-like structures,” said coauthor and HHMI investigator Dianne Newman, a professor in biology and biological engineering at Caltech. “This is a structure that hadn’t been observed before.”

“This bacterium-tubeworm interaction is the first account of an interaction mediated by a phage tail-like structure that’s beneficial,” added coauthor Nicholas Shikuma, a postdoctoral fellow in the Newman lab. “We’ve found that these MAC genes have homologues in other bacteria and those homologues actually cause virulence in insects,” said Shikuma, but in this case, “the bacteria actually help the tubeworm find a suitable place to metamorphose.”

Pei-Yuan Qian, a professor of life sciences at Hong Kong University of Science and Technology, who did not participate in the research, said that the authors have done outstanding bacteriology work showing how well-organized phage tail-like structures may affect larval metamorphosis of H. elegans and identifying the roles of the bacterial MAC genes in production of these structures. “It’s a good starting point that provides a hint for the follow up experiments, yet there are lots of open questions,” he said.

“One of the challenges, which this paper also faced, is that the chemical cues released by pure cultures of bacteria may not be able to explain what happens in the natural environment,” cautioned Qian. “Natural biofilms are made of several thousand species of bacteria,” he added, so examining the interactions of H. elegans with one species of bacteria raises questions of ecological relevancy.

The researchers now wish to find out whether the tubeworm response to MACs is shared by other species. “It is known that Pseudoalteromonas causes settlement of other marine larvae, and yet [scientists] really don’t know why,” said McFall-Ngai, “and so is this a universal mechanism or one that’s quite common to a lot of different marine invertebrates?”

Another area of future interest is determining the ways in which the larvae and bacteria interact and what physical or chemical signals the MACs send to jumpstart metamorphosis. “We now know what, but we still don’t know how,” said Hadfield.

Understanding the function of the MACs in P. luteoviolacea is also a priority. “I don’t honestly believe that bacteria make [MACs] to make tubeworm larvae settle on them,” Hadfield said. “One of the things we’d like to know is, what do they do with those things?”