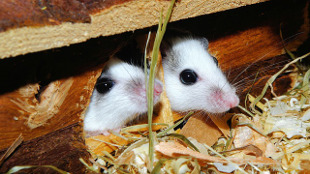 The physiological differences between males and females go far beyond reproduction; they may even include how an animal processes pain, according to a study published today (June 29) in Nature Neuroscience.

“This is not the usual type of sex difference that people usually report,” said study coauthor Jeffrey Mogil, a pain geneticist at McGill University in Montreal. His team found that male and female mice use completely different cell types to relay pain signals from the immune system to the nervous system.

Scientists who study the interactions between immune cells and neurons have long turned to microglia, macrophage-like immune cells that reside in the central nervous system, as the key intermediate between the two systems. In 2011, Mogil’s team reported that a protein found on microglia called toll-like receptor 4 was involved in processing pain signals in male but not female mice. To better understand...

In recent years, researchers have recognized the importance of adaptive immune cells, including B and T cells, which can also circulate within the central nervous system, in neuroimmunology. Mogil and his colleagues wondered if female mice might be utilizing one of these cell types to relay pain messages in place of microglia. When they repeated the experiments using mice that lacked all adaptive immune cells, the researchers found that female mice switched to using microglia for the pain pathway. The effect was reversed, however, when the researchers injected the female adaptive immune cell-deficient mice with T cells. The group went on to show that female mice use T cells for the very same pain pathway for which male mice use microglia, and their preference for this pathway was reversed by administration of testosterone.

“The finding that microglia are not required for pain sensitivity in female mice is really exciting,” said neurobiologist Bradley Taylor, who studies multiple sclerosis at the University of Kentucky and was not involved in the study. But he cautioned against extrapolating these findings to humans and even to rats. For example, Taylor’s group previously found that a drug that targets a T-cell pathway reported by Mogil to reduce pain sensitivity only in female mice works just fine in male rats. Mogil said that he and his colleagues have plans to look for the phenotype in other model organisms, including nonhuman primates.

According to Mogil, differences like this are often missed when, for the sake of simplicity or other reasons, animal research studies include just one sex. “We’ve happened upon sex differences because we use male and female mice in equal numbers. That’s actually pretty rare in the industry,” said Mogil.

“I’m very glad to see more research out there that shows that sex differences alter physiology,” said Jaclyn Schwarz, a neuroimmunologist at the University of Delaware who was not involved in the study.

This is a sentiment shared by National Institutes of Health (NIH) director Francis Collins, who, along with the Office of Research on Women’s Health director, Janine Clayton, announced last year that the NIH would install policies asking researchers to consider sex as an important variable in agency-funded research. Even in light of research like Mogil’s, however, the policy remains controversial.

“The advantage of studying females is that you may be able to understand differences between males and females,” said Taylor. But, he added, considering the current austerity measures within the NIH budget, there are disadvantages too. For example, splitting an experiment into half male, half female “could dilute the financial resources required to study an equally important scientific question that may be unrelated to sex differences.” Although his group has also shown that in a mouse model of multiple sclerosis, pain behavior is stronger in female mice than in males, for the most part he says his lab uses all female mice to study the disease since it predominantly affects women.

The field of pain neurobiology is a bit unusual in this respect. Mogil said that despite the fact that 70 percent of chronic pain patients are women, his field relies heavily on all-male studies for fear that female estrogen cycles will alter results and dilute phenotypes. But a meta-analysis published last year suggests this is not the case. “What everyone is afraid of is false,” Mogil said.

Because this sex difference in pain pathology is at the immune cell level and doesn’t affect how neurons function downstream, the finding has no impact on drugs already on the market that target neurons, but it could influence future trials of drugs designed to target immune-neuronal interactions that are now in development, Mogil said. “People are starting to sink time and money and effort into drugs based on this biology. It’s not that the biology is wrong, it’s just that there are two biologies, and we’re targeting the one that’s less clinically relevant.”