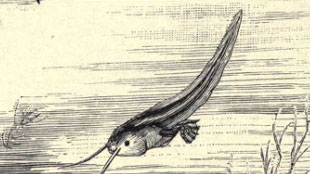 Xenopus laevis tadpoleFLICKR, BIODIVLIBRARYThe formation of certain neural circuits may be more simple than once thought, according to a paper published this week (January 8) in The Journal of Neuroscience. Previous research indicated that neurons recognize each other using matching proteins and receptors, linking up preferentially with specific cell types. But in the neural circuit that prompts Xenopus laevis tadpoles to swim in response to touch, neurons form synapses depending on their locations and whether their axons and dendrites meet, rather than synapsing through a more complex recognition process, scientists show.
“You expect nerve cells to grow to find the one they like,” said Alan Roberts, a neuroscientist at the University of Bristol in the U.K. and lead author of the study. “These experiments suggest they don’t need to. They just grow and synapse with anything, providing they grow in the right direction and the...
“The enormous complexity and precision in neural functions make us intuitively think the neuronal connections have to be precise, and indeed, most research on adult nervous systems have confirmed this,” Wenchang Li, a neuroscientist at the University of St Andrews in Scotland, wrote in an e-mail to The Scientist. Li, who in the past worked with the paper’s authors to characterize the tadpole swimming network, but was not involved in the present study, added: “It is surprising to know that neural functions can arise from a ‘crudely’ connected network.”
Roberts and his colleagues chose to study the tadpole swimming network in part because they had a clear idea of its input and output. Touch first activates sensory neurons, which then activate rhythm-generating neurons in the tadpole’s spinal cord and hindbrain on both the right and left sides. Neurons within the spinal cord and hindbrain activate motoneurons on either side of X. laevis in an alternating pattern, enabling the tadpole to swim.
In previous studies, Roberts and other researchers had produced whole-cell recordings of more than 1,500 neurons involved in the X. laevis swimming network and determined that touch-activated swimming behavior involved seven different neuron types. In the current study, the researchers generated additional whole-cell recordings to better understand the timing of neural activation in the network, and refined their understanding of the tadpole spinal cord and hindbrain’s neuroanatomy.
The researchers first populated their model of the swimming network with soma of neurons of the seven types involved in the network, spatially distributed in the spinal cord and hindbrain. They then used equations to predict axon growth from the soma, varying growth angle and branching depending on previous observations of how the neuron types grew in tadpoles. They also assigned the neurons dendrites, but lacked sufficient data to fully model all the ways in which those structures might grow.
Roberts and colleagues also accounted for the effects of barriers, such as the floor plate of the spinal cord and a dorsal barrier equivalent to the location of the dorsal horn in adult vertebrates. Neurons vary in their abilities to penetrate these barriers. The researchers assigned probabilities predicting whether axons and dendrites would form synapses when they met and, using their model, reconstructed the swimming network in silico.
The computer-generated swimming network turned out to share many properties with swimming networks in tadpole, the authors concluded. Simulated touch generated rhythmic neuronal activity and ultimately activated the motoneurons in a swimming pattern.
Joshua Sanes, a neuroscientist at Harvard University who was not involved in the study, called the team’s results puzzling. “[Roberts’s] evidence is strong,” he said. “Yet in several other systems—including retina, which I study—this rule unequivocally fails to explain actual patterns of connectivity.”
A study of neural wiring in the mouse retina published last year in Nature yielded results quite different from those Roberts’s team produced, Sanes pointed out. Electron micrographs revealed that proximity of axons to dendrites did not necessarily mean they would form a synapse—rather, the study showed that certain types of cells often synapsed together, while others tended not to form synapses even when intermingled.
Still, Roberts is convinced that there is more than one way to form a neural network. He suggests that basic networks like the tadpole swimming network might form as neurons synapse based on their proximity, while more complex networks might require neurons to recognize each other.
Li suggested that the properties of the tadpole swimming network make it particularly well-suited for simplified development. The rhythm-generating neurons in the spinal cord and hindbrain, called descending interneurons, are electrically coupled and act collectively. “Their excitation will be a lot stronger than any ‘erroneous’ synaptic activity,” Li said. “This is likely to be one ‘built-in’ measure to give the network robustness.” Perhaps the simple circuit-forming observed in the tadpole swimming network could work in any network, “where some mechanisms are at play to give the network functional robustness,” he suggested.
Roberts said his team’s results could have implications for regenerative medicine, suggesting that rebuilding certain human neural networks could also be easier than expected.
“Hopefully [these new results] will motivate people to ask whether this proximity argument can play a role in other systems,” said Sanes. “Maybe people have been too influenced by systems like the retina, where I really feel the answer is different.”
A. Roberts et al., “Can simple rules control development of a pioneer vertebrate neuronal network generating behavior?” The Journal of Neuroscience, 34:608-21, 2014.