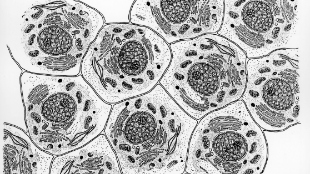 WIKIMEDIA, NATIONAL CANCER INSTITUTEUsing a technique called “gene trapping,” researchers have built a library of haploid human cell lines. The collection includes more than 3,000 lines, each one possessing a different mutated gene, a team led by researchers from the Austrian Academy of Sciences and the Vienna firm Haplogen reports today (August 25) in Nature Methods. “I think this could be quite an interesting resource,” said William Stanford, a professor at the University of Ottawa, who was not involved in the study. “I imagine people would embrace it. It looks very powerful.”

Functional studies of genes can be greatly aided by the use of haploid cell lines—those that have just one of each chromosome, rather than a pair—because the effects of mutations in an allele won't be masked by the other chromosome. “Having a complete knockout, you’ll have much stronger phenotypes compared to other techniques,” said Jan...

KBM7 originated from a patient with chronic myeloid leukemia, and is haploid except for chromosome 8. Though the cells are haploid, they still perform basic functions to remain viable. “Some people have the idea that haploid cells are some freak of nature kind of cells, but actually, haploidy is very compatible with life at the cellular level,” Carette told The Scientist. To create each mutant, the researchers infected the cells with a retrovirus that has a bias for integrating into genes that are actively transcribed. “The net result is that the gene is almost completely silenced and thus resembles a gene knockout,” Nijman wrote in an email to The Scientist.

Each mutant line contains a GFP marker and a unique genetic barcode so that clonal mixtures can be identified. Another convenient feature of the clones is that their mutations are reversible. On either side of the “gene trap” vector are loxP sequences. Adding to the cells the enzyme Cre recombinase, which targets loxP for excision, the researchers could remove the gene trap and restore normal protein production.

To validate their library, Nijman and his colleagues characterized several of the clones they created. For instance, a clone with a gene-trapped JAK2, which lies along the JAK-STAT signaling pathway, showed reduced phosphorylation of STAT1. “Although this was expected, it the first time that this is shown in human cells using a completely inactive JAK2 gene,” Nijman said.

“In theory, such a library with a complete coverage of all expressed genes—coding or non-coding genes—will offer an excellent platform to systematically study functions and actions of genes required for almost all cellular processes, such as cell cycle control, metabolism, drug resistance [or] sensitivity,” Yunhan Hong from the National University of Singapore wrote in an email to The Scientist. So far, the team has amassed a few thousand mutants of the 20,000 protein-coding genes in the human genome and made them available for purchase through a partnership between Haplogen and CeMM.

Anton Wutz of the Institute of Molecular Health Sciences in Zurich, who did not participate in the study, said he imagines clinical researchers would be especially interested in the clones. Cell biologists may be able to generate their own mutant cell lines, but clinicians with less laboratory capacity who want to investigate a patient’s mutation can now “request the clone and check: is this really a causal relationship they’re seeing, or just a correlation which has no functional meaning?”

There are some limitations to the clones, however. In particular, KBM7 cells don’t express all genes. “Expansion of this approach to haploid cells of different origins, in particular, haploid [embryonic stem] cells, will greatly increase the usefulness,” Hong said. Nijman added that as his team continues to broaden the library, it will become increasingly difficult to generate new mutants because the integration of the vector is random. Coupling the gene trap technique with other approaches, such as transcription activator-like effectors (TALE) and RNA-guided nucleases, could help the researchers expand the library.

Wutz said that Nijman’s library adds to a growing collection of techniques researchers can use to help make sense of the human genome. “I think it’s definitely one of the up-and-coming things, to have mutant collections for the human genome,” he said.