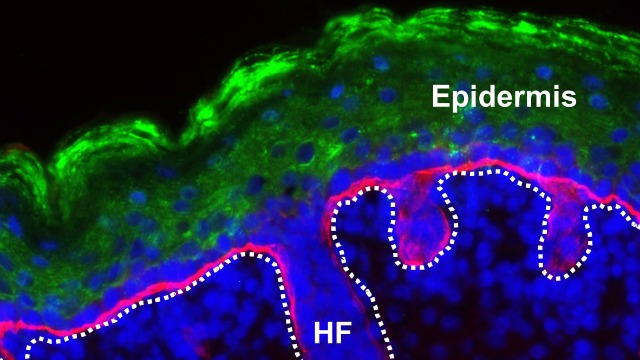 An immunofluorescence image of one of the engineered skin graftsXIAOYANG WU ET AL.In a proof of concept study, researchers have used a gene-edited skin graft to treat diabetes in mice, they reported yesterday (August 3) in Cell Stem Cell.

The graft is grown from mouse stem cells engineered by CRISPR to produce the GLP-1 enzyme, which stimulates insulin release. Obese and diabetic mice treated with the patch did not display signs of diabetes and gained less weight when fed a high-fat diet.

The study is “pretty exciting” says David Taylor, a structural biologist at the University of Texas at Austin, who was not involved in the work. In contrast to gene therapies that aim to correct the mutation causing a disease, this would be “like another way of taking a drug orally—in this case it’s on your skin,” he says.

The stem cells used in...

Senior author Xiaoyang Wu of the University of Chicago says one advantage of the technique is that it is safer than using engineered viruses to edit genes in vivo. Viruses “may cause a very strong immune reaction and inflammation in vivo,” notes Wu. In contrast, lab-grown skin grafts have been used clinically for some time to treat burns, and have proven safe, he says.

A major hurdle to developing a skin-based gene therapy for clinical use has been a lack of a good mouse model, Wu says, because the grafts only worked in immune-compromised mice, which didn’t allow researchers to see how the engineered cells would fare when exposed to a healthy immune system. His team spent nearly three years developing a technique for growing “organoids” with layers mimicking real skin that would be tolerated by wild-type mice. The graft they designed accounted for about 1 percent of the animals’ body surface, which would translate to a palm-size patch in humans.

Having therapeutic gene expression controlled by a drug rather than always on would allow doctors to calibrate how much of the enzyme enters a patient’s bloodstream, Wu notes. But he suggests doxycycline would need to be replaced by a different drug for clinical use to avoid the side effects of long-term antibiotics.

Wu says a similar technique could also be used to treat other metabolic disorders, such as phenylketonuria, a genetic disease that causes a toxic builup of phenylalanine unless it is detected and treated with a special diet.

“Overall, I think it’s a very neat solution to this problem here of delivery of GLP-1 for the treatment of type 2 diabetes and obesity,” says Jeff Millman, a biomedical engineer and stem cell researcher at Washington University in St. Louis, who was not involved in the study. But he cautions that before the technique can be moved to the clinic, more work will need to be done to ensure that neither the CRISPR editing nor the stem cell culturing method inadvertently introduce mutations that could endanger patients.