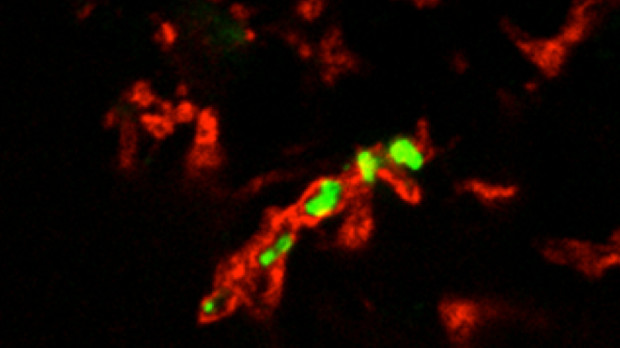 H. ducreyi (green) surrounded by human fibrinogen (red) from a pustule biopsy MARGARET BAUER, INDIANA UNIVERSITYTo understand whether the human skin microbiome can affect the ability of a bacterial pathogen to cause an infection, researchers have had to rely on observational studies. Now, taking advantage of a unique human skin infection model, Stanley Spinola of Indiana University and his colleagues, have found evidence to suggest that the makeup of the skin microbiome plays a role in whether an individual can clear a certain bacterial infection without intervention. The results, published this week (September 15) in mBio, provide another example of how the ecology of human skin can influence health and disease.

“The [authors] took advantage of a very clean system—human volunteer inoculation,” said microbiologist Martin Blaser of the New York University Langone Medical Center who was not involved in the study. “We have a paper of the same idea,...

“This is an interesting report, and most important, because it takes yet another step toward seeking evidence of a clear function of the microbiome,” Richard Gallo, chief of dermatology at the University of California, San Diego, School of Medicine, who was also not involved in the study, wrote in an email to The Scientist.

Spinola’s laboratory had previously developed an infection model in humans of Haemophilus ducreyi, a bacterial species that causes chancroid, a relatively common form of sexually transmitted genital ulcers that’s endemic in certain parts of Africa and Asia. The bacterium has also been implicated in chronic skin ulcers in children seen in individuals in regions of equatorial Africa and the South Pacific islands.

H. ducreyi initially forms a red bump called a papule that is cleared without any intervention in about 30 percent of tested volunteers, while the remaining people go on to develop pustules that, if not treated, can form skin ulcers. For the present study, the researchers inoculated volunteers with a set dose of the bacteria on their upper arms, and allowed the infection to progress—up to several days—to the pustule stage. “We have one of few bacterial models in which you can actively infect people,” said Spinola. “And the reason we can ethically do this is that the [inoculation] just causes a local infection that we can terminate with antibiotics.”

The researchers took skin microbiome samples of eight individuals prior to challenging them with H. ducreyi, during days one through five of infection, as well as at the time of pustule formation or following infection resolution. Four study participants resolved the infection on their own, while the other four progressed to the pustular infection stage. All of the participants were treated with antibiotics, no matter their infection outcome.

“It is uncommon to perform inoculation studies in research volunteers with bacteria that can cause infections, but studies like this one could provide valuable insights into the pathogenesis of diseases,” wrote Heidi Kong, who studies the skin microbiome at the dermatology branch of the Center for Cancer Research in Bethesda, Maryland, in an email to The Scientist.

A predictive signature emerged when the researchers analyzed the volunteers’ skin microbiome samples prior to inoculation. The microbiome community structure—the species and their relative distribution—was similar among people who spontaneously resolved their infections, the researchers found. In contrast, those four who developed pustules each had very different microbiome compositions. In people who progressed to an active infection, the microbiome was much more dynamic from the beginning of the experiment to the end. “The pustule-formers started out with dispersed microbiomes that were then driven to a similar composition,” explained Spinola.

The results highlight an association between the skin’s microbial inhabitants and resolution of infection. But what is still not clear is whether the bacteria that normally dwells on our skin directly help to clear the pathogenic bacteria.

“The resident microbiota are antagonistic to invaders whether they are in the gastrointestinal tract or skin and they don't want to share their home turf,” said Blaser. There is accumulating evidence that skin-dwelling bacteria help fight infections, but causal links are still missing.

Another possibility is that one’s skin ecology may predispose him or her to pustule formation. “This may be why the baseline microbe composition is different among the [pustule-formers],” said Gallo. “The microbiome could be only another indicator, but not the cause of bacterial infection.

A third possibility, said Spinola, is that the infection-resolvers have a similar microbiome to start, because “their immune systems selected for a specific microbiome signature.”

One of the abundant bacterial taxa among the infection-resolvers was Propionibacterium acnes, a microbe associated with skin acne. “This study provides evidence that these bacteria are good for us for this type of infection, which tells us something about the complexity of the microbiome,” said Blaser. “It means we shouldn’t jump to conclusions quickly based on observational microbiome studies. It turns out that ecology is ecology, whether forests or prairies. There are principles of ecology and over time we will discover the details for our human ecosystems.”

Spinola’s team is planning follow-up studies on a larger cohort of individuals and to expand the microbiome analysis to also include the viral and fungal components of the skin. His team is also working on a preliminary study on the role of the genetics of the immune system in response to similar bacterial infections.