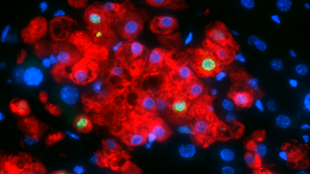 Human fibroblast-derived hepatocytesMILAD REZVANIScientists have differentiated human induced pluripotent stem cells (iPSCs) into hepatocytes in a dish, but faced challenges using these cells therapeutically. Most iPSC-derived liver cells do not adequately proliferate after transplantation or function exactly like adult hepatocytes do. Now, researchers from the University of California, San Francisco (UCSF), have differentiated human hepatocytes with a modified technique that bypasses pluripotency, and used these cells to repopulate a mouse liver. Their work was published in Nature today (February 23).

“I really like this paper. It’s a step forward in the field,” said Alejandro Soto-Gutiérrez, an assistant professor of pathology from the University of Pittsburgh, who was not involved in the work. “The concept is reprogramming, but with a shortcut, which is really cool.”

The team isolated human fibroblasts and transduced them with retroviruses expressing three stemness factors: OCT4, SOX2, and KLF4. The researchers grew the...

The authors called these cells induced multipotent progenitor cells (iMPCs), which they later differentiated into endodermal progenitor cells (iMPC-EPCs). They used small molecules and growth factors to increase iMPC-EPC colony size while maintaining the cells in an endodermal state. The researchers then cultured the cells with factors and small molecules known to promote hepatocyte differentiation, generating iMPC-Hepatocytes (Heps). Upon transplantation into a mouse model of liver injury, the iMPC-Hep population continued to proliferate at least nine months after transplantation. And the cells matured, displaying a gene expression profile similar to that of typical adult hepatocytes. Transplantation of iMPC-Heps also increased the survival of a mouse model of chronic liver failure about as efficiently as transplantation of adult hepatocytes did.

“It is a breakthrough for us because it’s the first time that we’ve seen a cell that can actually repopulate a mouse’s liver,” said Willenbring. He speculated that the cells generated using this reprogramming shortcut may be better able to repopulate the liver because starting with an iMPC—rather than an iPSC—eliminates some steps along the path to generating hepatocytes. The power of this model is that the cells can functionally mature, while still retaining the ability to proliferate, which are both prerequisites for therapeutic applications, he added.

But before the technique enters the clinic, there is still work to be done. “The key to all of this is trying to generate cells that are identical to adult liver cells,” said Stephen Duncan, a professor of cell biology at Medical College of Wisconsin, who was not involved in the study. “You really need these cells to take on all of the functions of a normal liver cell.” Duncan explained that liver cells taken directly from a human adult might be able to repopulate the liver in this same mouse model at levels close to 90 percent.

Willenbring and his colleagues saw repopulation levels of 2 percent by iMPC-Heps, which is still better than the 0.05 percent repopulation typically accomplished by hepatocytes derived from iPSCs or embryonic stem cells. “As good as this is, the field will need greater levels of expansion,” said Ken Zaret of the Institute for Regenerative Medicine at the University of Pennsylvania, who did not participate in the work. “But the question is: What is limiting the proliferative capacity of the cells?”

Zaret explained that it is not yet clear whether some aspect of how the cells were programmed that differed from how they normally develop could have an impact on how well the population expands after transplantation. “There still is a ways to go,” he said, “but [the authors] were able to show much better long term repopulation with human cells in the mouse model than other groups have.”

Correction (February 24): This story has been changed to accurately reflect the capability of hepatocytes derived from iPSCs or embryonic stem cells to repopulate the liver. The original version of this article stated that they are capable of 0.5 percent repopulation, when they are only capable of about 0.05 percent repopulation. The Scientist regrets the error.