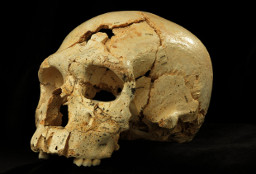 Skull from Sima de los HuesosJAVIER TRUEBA/MADRID SCIENTIFIC FILMSThe separation of the Neanderthal and modern human lineages was thought to have occurred during the Middle Pleistocene era (from 780,000 to 130,000 years ago), but exactly when and how this separation occurred is still unclear. Now, an analysis of 17 ancient skulls from a site in Atapuerca, Spain, provides evidence of the early evolution of the Neanderthal lineage. The results were published today (June 19) in Science.

Juan Luis Arsuaga Ferreras, a professor of human paleontology at Complutense University of Madrid in Spain, along with his colleagues characterized this unique collection of specimens from a small chamber within a cave called Sima de los Huesos, finding that the skulls show a combination of both Neanderthal and more ancient morphologies.

The researchers estimate that the skulls are about 430,000 years old—the oldest specimens with Neanderthal features to...

“Until recently, most [scientists] supported [the idea] that Neanderthals emerged, at most, 250,000 years ago. The discovery at Sima demonstrates that there is a much deeper history of the Neanderthals than we previously thought, to at least 430,000 years ago,” said Jean-Jacques Hublin from the Max Planck Institute for Evolutionary Anthropology in Leipzig, Germany, who was not involved in the work but penned a perspective article accompanying the study. “[These new specimens] are clearly not like the late Neanderthals, but ancestral forms of Neanderthals.”

Researchers have explored this excavation site for more 30 years, uncovering at least 28 different, but biologically similar, individuals—mostly young adults. “The material from Sima is absolutely unbelievable because of the large number of individuals represented by all parts of the skeleton,” said Hublin. The present study now provides details of the almost complete skulls of 17 of these individuals, including seven newly found specimens.

The fossils were previously dated to more than 530,000 years ago and were considered to be those of Homo heidelbergensis, an extinct ancient lineage ancestral that may be parental to both Neanderthals and modern Homo sapiens. But for the current study, the team used more modern dating technologies: uranium-series dating of carbonate directly in contact with one of the skulls and luminescence dating of a layer of mud on top of the specimens. “We have confirmation from these two distinct and quite independent dating techniques showing an age of about 430,000 years for these fossils,” said Sharp.

Studying the face, jaws, teeth, and craniums of these ancient individuals, the researchers found that all of the specimens had the same combination of features, including some typical of later Neanderthals. “The Atapuerca team confirm that the Sima skulls, jaws, and teeth show many Neanderthal features, including the shape of the brow ridges, occipital bone and face, and the patterns of cusps on the teeth,” Chris Stringer, an anthropologist at London’s Natural History Museum, told The Scientist in an e-mail. “[The evidence shows] that these fossils belong to the Neanderthal lineage but not to the Homo heidelbergensis species.”

But the craniums were smaller than those of later Neanderthals, making them closer to more primitive lineages and providing evidence for a gradual evolution pattern of the Neanderthal lineage, lending support to the so-called accretion model first proposed by Hublin.

Scientists continue to excavate early human bones from the cave in northern Spain. And similarity among the individual specimens will allow for a detailed analysis of sexual differences between the skeletons and of the development and growth of the individuals, said Arsuaga.

“The rich Sima de los Huesos material, with every part of the skeleton beautifully preserved, will continue to inform us about human evolution 400,000 years ago as research continues on this astonishing, and even beautiful, collection of human fossils,” said Stringer.