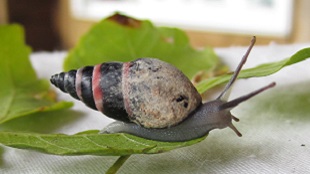 SEYCHELLES ISLANDS FOUNDATION, C ONEZIAOne of the first species reported extinct as a result of climate change—a tiny, colorful land snail endemic to Aldabra atoll in the Seychelles Islands—was rediscovered by an expedition led by the Seychelles Island Foundation in August this year.

Prior to this, the last specimens of deep purple, pink-striped Aldabra banded snails (Rhachistia aldabrae) were sighted in 1996. Searches for the snail conducted in 2005 and 2006 were unsuccessful, and it was declared extinct in 2007, when a Biology Letters study by Justin Gerlach of the Nature Protection Trust of Seychelles in the U.K. correlated the organism’s disappearance with a decrease in rainfall as a result of short-term climate change. The snail’s extinction was cited as an example of a species whose loss was directly caused by climate change, rather than other factors such as habitat loss or invasive species, earning the tiny...

While good news for snail lovers and conservationists, the animal’s rediscovery reignited a debate about the validity of Gerlach’s study. As early as 2007, when Gerlach published his report linking the snail’s extinction with climate change, biologist Clive Hambler of the University of Oxford and his colleagues submitted a comment to Biology Letters pointing to data collection and analysis errors and requesting that the study be retracted. Hambler’s comment was rejected for publication at the time; now, in statements to media outlets, Hambler has once again voiced his concerns about the study and called for a retraction. And in an e-mail to The Scientist, his frustration is clear, as he cites the “catastrophic failure of the peer review and editorial process.”

Specifically, Hambler and his colleagues argue that the Gerlach study provided few details of the survey method used, missed some recorded observations of the species, and used climate change data that amplified the trend of lower rainfall. In addition, because the surveys only sampled a small portion of the largely inaccessible islands, said Hambler, who argued with his coauthors in 2007 that more extensive searches would find the species—as proved to be the case this August. “I argue any one of [these errors] should be grounds for retraction,” Hambler told The Scientist.

Biology Letters has declined to retract, however, according to an editorial penned by the journal’s editor-in-chief Rick Battarbee. Although the paper’s conclusion of extinction was incorrect, “neither misconduct nor honest error have been the cause [of the invalid conclusion],” wrote Battarbee, a palaeoecologist at University College London.

“There are lots of papers that have been published in the past and subsequently were found to be inaccurate,” Battarbee told The Scientist. “The fact that someone wanted to contest these analyses, the data, or the interpretation is just standard [scientific process].”

After the snail’s reappearance, the journal invited Hambler to resubmit his comment, but he has declined. “I wanted the original manuscript published in some way—perhaps as supplementary material explaining a retraction,” said Hambler, who added that he felt the journal’s original handling of his rebuttal was “unfair,” “possibly due to referees having a conflict of interest.” Indeed, Hambler’s comment was reviewed and rejected by the two peer reviewers who had reviewed Gerlach’s 2007 paper. However, Battarbee noted that this editorial process has since been revised to include independent peer reviewers not involved with the initial submission. “At that time that was accepted as being the standard practice,” he said. “It has changed in line with current best practices.”

In addition to raising questions about the peer-review process itself, the kerfuffle over the Aldabra banded snail highlights the lack of clear standards to define an exhaustive search for a species, or even how long to wait after the last sighting of a species to declare it extinct. But mollusk researcher Timothy Pearce of the Carnegie Museum of Natural History who was not involved with the study supported the methods used by Gerlach. “It was a very reasonable conclusion to make at the time, based on the information they had available,” he said. “Given the reality of expeditions and the inaccessibility of the island, we cannot have perfect information.”

Conservation biologist Resit Akçakaya of Stony Brook University in New York agreed. “At the time of the paper, the species had not been seen for 3 to 5 generations, maybe longer,” Akçakaya said in an e-mail to The Scientist. “In hindsight, it is easy to say it was premature to declare extinction. [However], the rediscovery of a presumed extinct species does not necessarily mean that the assessment method or approach is wrong.”

Nevertheless, added Akçakaya, who also chairs the IUCN committee that develops guidelines to assess threatened and endangered species, there’s no doubt that the process of evaluating species’ prevalence is in need of an overhaul.  IUCN is “working on more specific, quantitative guidelines for declaring species extinct or ‘possibly extinct,’” Akçakaya said.