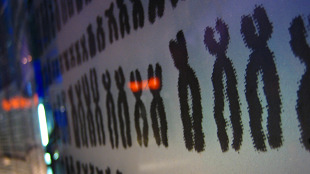 Flickr, Dani P.L.The Y chromosome, apparently, is not as special as we thought. Another example of a non-recombining chromosome that regulates a choice between two phenotypes is described in a study published today (January 16) in Nature. Fire ant colonies are organized either around a single queen or several, and the presence of a non-recombining “social chromosome” in some worker ants dictates which structure a colony adopts.

“It’s very exciting work,” said Gene Robinson, an evolutionary biologist at the University of Illinois at Urbana-Champaign, who was not involved in the study. The results help us “understand behavioral plasticity and alternative behavioral forms in as broad a genomic context as possible.”

Fire ant (Solenopsis invicta) colonies are organized by one of two different social structures. In monogyne colonies, a large queen accumulates a large amount of body fat, mates with one male, and flies off to establish...

Which of these social structures a fire ant colony adopts depends on what’s known as a supergene—a set of linked genes that together produce a complex phenotype. When worker ants—females with two sets of chromosomes—carry two copies of the supergene marked by the B allele for the odorant-binding protein gene Gp-9 (Gp-9BB), the colony accepts only one Gp-9BB queen. Colonies with mixed worker genotypes—i.e., both Gp-9BB and Gp-9Bb ants—accept several Gp-9Bb queens.

But it’s not just the Gp-9 gene that matters; all the other genes in the supergene likely play a role in the colony’s social phenotype as well. As such, scientists speculated, this system only works if “those genes can’t recombine,” explained Ken Ross, an evolutionary biologist at the University of Georgia, who did not participate in the research.

Laurent Keller, an evolutionary geneticist at the Université de Lausanne in Switzerland, and colleagues decided to look more closely at the differences between the B and b variants in males, who only carry one set of chromosomes, and therefore only one supergene allele. Keller’s group found that, within the Gp-9b supergene, a section is inverted compared to Gp-9B variants. This inversion prevented recombination between Gp-9B and Gp-9b supergenes, though Gp-9B supergenes do recombine with each other.

“It takes quite a few genes to make a male or female,” said Keller, but an “in-between” genotype doesn’t work well. “It’s the same with social forms.” A solitary queen who hadn’t built up enough body fat wouldn’t be unable to establish a new colony on her own, and fat build-up would be a waste in queens who simply return to their home societies where food supplies are plentiful.

It’s not clear whether other supergenes, such as those that control mimicry in butterflies, act in a similar fashion, though Keller thinks it likely that other complex behaviors with two possibilities might have similar “Y-like” chromosomes. But Ross argued that if such non-recombining chromosomes were more common, more would probably have already been identified.

Keller and his lab are extending their studies to closely related ant species to see whether they have their own social chromosomes. It will also be important to determine which genes in the region are actually contributing to the social phenomenon, noted Ross. “Does each contribute in some small way? Or it could be one of them?” Untangling this question, he added, will likely take “several lifetimes of scientific research.”